Go take a gander around your favorite college football publications and try find everyone’s midseason All-America teams. You’ll see the likes of Jabrill Peppers, Pat Elflein, Malik McDowell and a few other B1G players pretty consistently. Those are the household names that everyone had during the preseason, too.

Austin Carr wasn’t on anyone’s national radar during the preseason. In fact, he still might not be on every B1G fan’s radar despite the fact that he’s the conference’s overwhelming leader in every meaningful receiving category. The Northwestern wideout is worthy of everyone’s attention, especially Ohio State’s.

While most understandably wrote Northwestern off after a horrific 0-2 start, Carr has been the driving force behind the Wildcats’ drastic midseason turnaround. He’s been a rare presence for a program that hasn’t had an All-American receiver since 1952. The position wasn’t even called “receiver” back then.

If you’ve been paying attention to college football, you know how good Carr’s been. It shouldn’t have taken until Week 9 for him to finally get on the national stage, but that’s the reality.

On Saturday, Carr will take on an Ohio State secondary that’s as good as there is in college football. The Buckeyes shouldn’t be surprised when he looks like the best wideout they’ve seen all year. 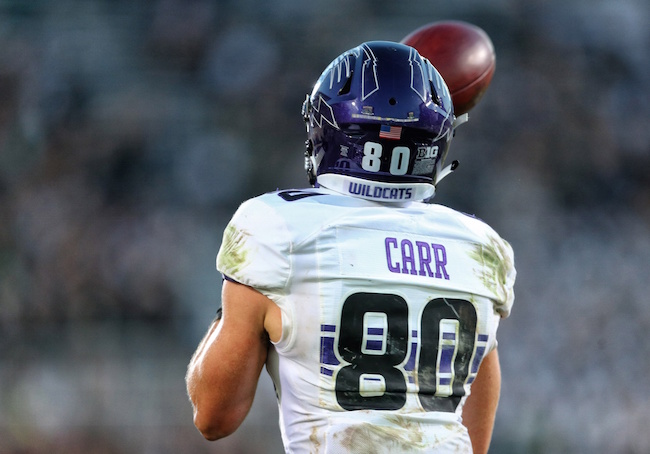 Northwestern’s offense has come a long way since scoring seven points at home against Illinois State (Carr scored that only touchdown). Since the beginning of October, Northwestern averaged 38.7 points per game in three straight victories. That once-non-existing passing attack accounted for an average of 243.3 yards and three touchdowns per contest.

A lot of that came thanks to Carr. Six of the nine passing touchdowns went to him, and 328 of the 730 passing yards were his, too.

But Carr’s dominance has been more than three games. He just became the first player in Northwestern history to record a touchdown catch in six straight games. He’s been arguably the most consistent Power Five receiver in the country.

Look at how Carr compares to the top 10 Power Five receivers:

Among those receivers, Carr is the only one with at least 73 receiving yards in every contest. Not even a Texas Tech receiver can make that claim.

Northwestern, at least under Pat Fitzgerald, has been the polar opposite of a place like pass-happy Texas Tech. The Wildcats were the team that finished 12th in the B1G in touchdown passes with Trevor Siemian, who’s now leading the defending Super Bowl champs. More recently, they had the B1G’s worst passing offense in 2015. By a lot.

In just seven games, Carr more than doubled Northwestern’s 2015 leader in receiving yards and touchdown catches. That was superback Dan Vitale, by the way.

What Carr is doing in that offense is unprecedented. If Carr kept up his pace and Northwestern went to a bowl game, he’d finish with a school-record 1,337 receiving yards. That would be seven yards better than Braylon Edwards’ monster 2004 season, which ranks eighth in B1G history.

With just four more receiving touchdowns, Carr will have the program’s single-season record for that, too. He’s on pace for 16 touchdowns, which only five receivers in B1G history have recorded in a single season.

Not bad for a former walk-on.

It’s easy to forget that Carr was a no-star recruit without any big-time offers. He certainly doesn’t look like it anymore. Well, as Fitzgerald said, Carr lies and says that he’s 6-1 when he’s really 5-11. And that 205 pounds is more like 185.

Overlooked in the recruiting process, Carr is often overlooked in the defensive game plan. Unlike most slot receivers, Carr operates downfield and gets behind a defense before it knows what hit it:

Carr has been the downfield target and the possession receiver for Northwestern. That’s what makes him such a difficult cover. Cornerbacks aren’t shadowing him all over the field. For Ohio State to contain the most-consistent Power Five receiver in the country, it probably won’t be a matter of one person shutting him down.

Ohio State might have three first-round defensive backs on the field Saturday. With the exception of Iowa’s Desmond King, who really didn’t shadow him, Carr hasn’t had a matchup against a secondary this good. On the flip side, the Buckeyes haven’t faced this productive of a receiver in 2016.

Carr vs. the OSU secondary is one of the more underrated battles we’ve had all year. Why is it underrated? Nobody recruited Carr, he plays in front of the smallest fanbase in the B1G, he wasn’t on scholarship until 13 months ago and frankly, his team didn’t have any preseason or early-season hype.

If Carr goes off again in Columbus, some would probably call it his “coming out party.” While that wouldn’t be accurate, perhaps some would look at Carr’s impressive stat line and finally give him the attention he deserves.

He wouldn’t even have to fudge those numbers.