The 2022 Women’s College World Series begins Thursday, with all 8 teams in action.

The Wildcats arrive in Oklahoma City with a record of 45-11. NU swept the NCAA Tournament Evanston Regional 3-0 with wins over Oakland and McNeese. Northwestern then out to Tempe, Arizona to face No. 8 seed Arizona State in the NCAA Super Regional. The Wildcats won the series 2-1, taking Game 1 (4-3, 11 innings) and Game 3 (8-6).

Oklahoma has a 54-2 record in 2022. The Sooners, looking to defend their national championship, are led by Jocelyn Alo, the sport’s Home Run Queen. OU won the NCAA Tournament Norman Regional in 3 games, capped by a 20-0 run-rule victory in 5 innings over Texas A&M. Oklahoma won the Norman Super Regional in 2 games over No. 16 UCF (8-0, 5 innings; 7-1).

Like the previous rounds of the NCAA Tournament, the WCWS is double-elimination. The winner of Thursday’s Northwestern-Oklahoma game will play in Saturday’s Game 7. The loser faces elimination in Friday’s Game 5. The full bracket can be viewed below, via NCAA.com: 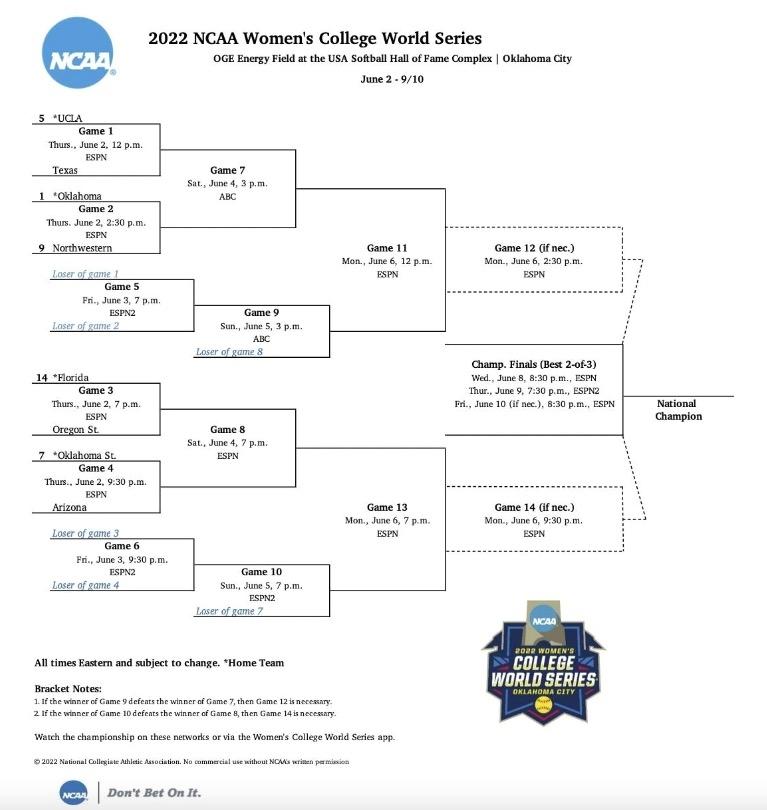