J.T. Barrett said it'd be tough to leave Ohio State, but where would he go?

Lost in the shuffle of Ohio State’s stunning blowout loss to Clemson was the odd comment of the night.

J.T. Barrett was asked about his future at Ohio State. What the junior quarterback said was baffling.

“My main focus was to focus on this year so I didn’t really give it that much thought,” Barrett said, “But it will be really hard for me to walk away when we just lost 31-0.”

First off, Barrett has at least given it some thought. If he hadn’t, he wouldn’t throw out an answer that makes it seem like he’s torn about whether or not he’s leaving Ohio State.

Wait a minute. Back up.

Why on earth would Barrett even consider leaving Ohio State? Did Barrett actually suggest he thinks he’s ready to be a quarterback in the NFL? You know, the league with defenses much better than Clemson?

Or was Barrett suggesting something else? 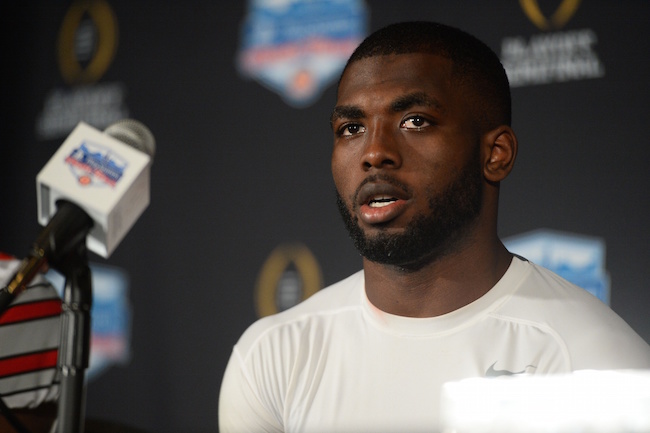 In all fairness to Barrett, he’s been one of the top quarterbacks in college football the last three years. You don’t earn Ohio State’s career touchdowns record by being subpar.

And Barrett is a smart guy. He picks and chooses his words wisely, and usually, he backs them up. So surely, Barrett will get all the information he needs from the NFL draft advisory committee before making a decision.

But by no means is Barrett getting anything better than a Day-3 grade at best. That’s probably too optimistic. With his throwing motion, lack of precise accuracy and inability to consistently stretch the field, you’d be hard-pressed to see him get high marks from any next-level talent evaluator.

Even if Barrett switched to receiver or running back, that would still be a massive learning curve. The odds of him getting drafted to play a brand-new skill position are slim to none.

RELATED: Ohio State never had anywhere near a playoff-caliber offense in 2016

An early NFL entry from Barrett seems unrealistic, to say the least.

So let’s consider all of Barrett’s possibilities outside of Ohio State in 2017 because there is another intriguing option.

Barrett just graduated from Ohio State. That means, theoretically, he could go to any program in the country and be eligible immediately as a graduate transfer.

Where is Barrett from? Texas. Who just took over at Texas? The offensive coordinator who helped Barrett finish fifth in the Heisman Trophy voting as a redshirt freshman, Tom Herman.

Yes, Herman has a talented quarterback in Shane Buechele, who will be a sophomore next year. But a new coach doesn’t guarantee him a job, especially if Herman could get Barrett to come to Austin.

What a storyline that would be. 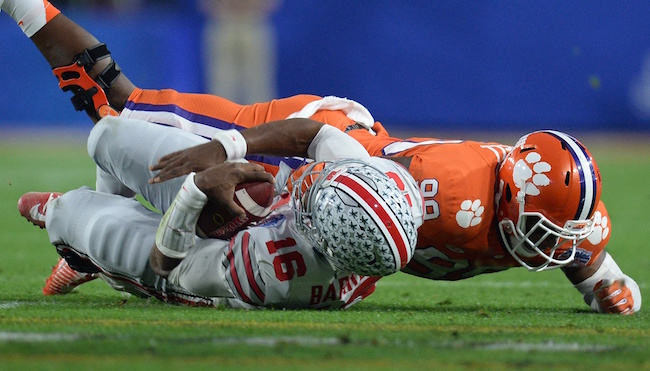 Again, that’s pure speculation and connecting some dots. Nobody knows if Barrett would even be interested in wearing another uniform. Just seeing that in words looked weird.

Nobody knows what Barrett’s conversations with Urban Meyer will be like. It’d be surprising if Meyer pushed his Tim Tebow-like signal-caller (his words, not mine) out the door. Meyer hinted that the Buckeyes could be making changes to their offensive staff. They should. Ed Warinner and Tim Beck could both be on their way out, which could have an impact on Barrett’s decision.

What Barrett’s comments on Saturday night proved — despite the fact that he said he hadn’t thought about it much — was that he actually is weighing his options. He didn’t say “leave for the NFL.” He just said “walk away.”

Some might’ve questioned true freshman quarterback Dwayne Haskins when he talked about Barrett’s future before the Fiesta Bowl.

“I’ll just have to compete with (Barrett),” Haskins told cleveland.com earlier in the week. “I don’t know what he’s going to do, but whatever he does, I know it’s going to be the best for him though. … I (think about it) a little bit, but I just have a feeling he’s going to leave. We’ll see what happens.”

At one point, the thought of Barrett leaving OSU early was about as unfathomable as Meyer getting shut out after having a month to prepare.

After Saturday night, that might not be so crazy after all.