If J.T. Barrett leads Ohio State to a win at Oklahoma, is he the Heisman favorite?

Let’s not assume anything.

Nobody is guaranteeing Ohio State to walk into Norman and dominate Big 12-favorite Oklahoma. Skip Bayless is guaranteeing a victory for his Sooners, but he doesn’t count.

So for this sake, let’s look at a hypothetical scenario.

Let’s say that Ohio State does pick up a monster win at Oklahoma. Let’s say that J.T. Barrett spearheads an offensive attack that’s too much for Sooners. Maybe he accounts for three or four touchdowns and OSU scores 30-plus points.

Would that make Barrett the Heisman favorite?

It’s not a crazy thought. After all, Barrett would be the only offensive household name on the No. 3 team in the country (Curtis Samuel is quickly becoming one). Even better, he’s a quarterback. Barrett wouldn’t be coming out of nowhere. He currently sits at No. 3 in the Bovada Heisman Trophy odds.

Consider some of the names that Barrett trailed to start the season and look at the starts they’re off to:

Barrett has outperformed all of those players so far, albeit against two cupcakes.

I know what you’re thinking. What about Christian McCaffrey? He’s currently the favorite with 4.5-to-1 odds. McCaffrey only played in one game so far because of Stanford’s Week 2 bye, but he performed well with 166 yards from scrimmage and two touchdowns. With a home game against an unimpressive USC team on Saturday, McCaffrey has a chance to dazzle again.

But whether it’s fair or not, this is still an award dominated by quarterbacks. Putting up monster numbers and leading the No. 3 team from the quarterback position could still put Barrett in the driver’s seat. 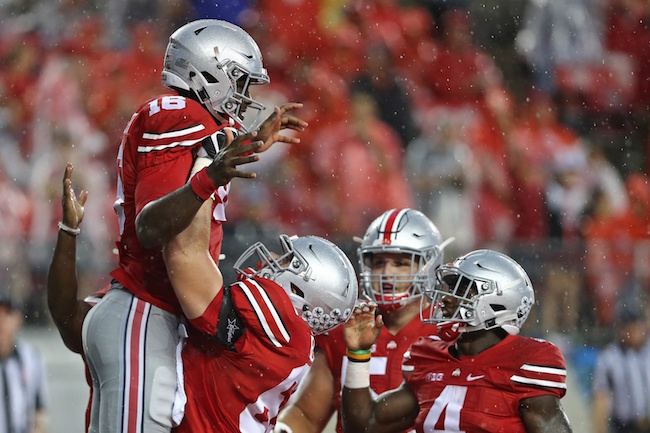 Ok, you might be upset that I went through 400 words of Heisman talk of this without mentioning Lamar Jackson. My bad. I promise I was getting to him.

Based on the first two weeks, Jackson would be the Heisman winner if the ceremony was today. Simply put, Jackson has been ridiculous. Through two games, he already has 697 passing yards, seven TD passes, 318 rushing yards and six TDs on the ground. Yes, he already has 1,015 yards from scrimmage and 13 touchdowns. That’s absurd. Barrett’s 583 yards and nine scores don’t match up with that.

On top of that, the internet already loves Jackson:

If you haven’t seen him play yet, flip on Jackson vs. Florida State on Saturday at noon. You won’t regret it. But Jackson’s Louisville team faces No. 2 Florida State. If Jackson loses against the Cards’ first real opponent, his meteoric rise takes a hit. He won’t move from No. 3 to No. 1 in the Heisman odds with a loss.

In all fairness, Barrett’s stock would also take a slight hit with a loss. He wouldn’t take a major drop in the race, but we’re looking at his odds of becoming the Heisman favorite after this weekend.

That’s all within reach for the OSU quarterback IF he takes care of business in Norman. This is obviously a hypothetical scenario. As we’ve seen already, a lot can happen in a weekend. If Florida State Deondre Francois outshines Jackson — with the College GameDay crew in attendance — he could be the new Heisman favorite as the star of the likely No. 2 team in the country.

Whatever happens, the Heisman race won’t be decided after Week 3, neither will the College Football Playoff field. In all likelihood, Barrett is far more focused on the latter.

Not to worry. That’s what we’re here for.