Sure, it was Rutgers but J.T. Barrett has earned right to be called 'OSU legend'

On OSU’s first possession on Saturday, J.T. Barrett rolled out and tried to connect with James Clark. The throw was behind him, which led to a tip and a Rutgers interception. It stalled Ohio State’s opening drive against a team the Buckeyes were favored to beat by 38 points.

Last year, that would’ve put Barrett in a hole. He probably would’ve looked to the sidelines and saw Cardale Jones warming up. This year, Barrett had to make the adjustment and right the ship. He went up to Urban Meyer and broke down why he made the throw when he did.

Would that pick mess up Barrett’s confidence for the rest of the day? Would this be another too-close-for-comfort game because of the OSU offense?

No, that’s not how legends respond. 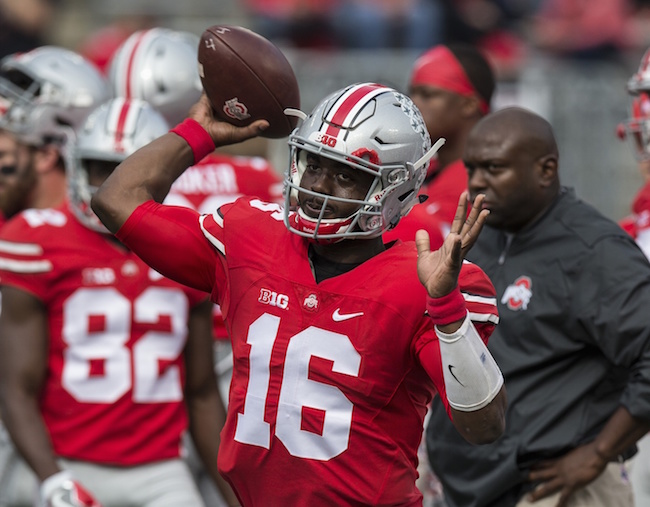 That wasn’t official until Barrett tied and broke the program’s all-time record in the first half on Saturday. Sure, he did it against a Rutgers defense that can’t match up with Ohio State’s weapons. But what Barrett accomplished on Saturday was the culmination of a career that’s been full of criticism, adjustments and touchdowns.

For those who were watching closely, Barrett wasn’t even the most dynamic player on the field Saturday. That title belonged to Curtis Samuel. He was a matchup nightmare against Rutgers all afternoon.

Barrett made sure that was exploited. Whether it was drags, zone reads or screens, Barrett and Samuel were in sync throughout the afternoon. It seemed like whenever Samuel got the ball, it was in space.

RELATED: The next Percy Harvin? Curtis Samuel has been that and more so far

In his third year as the OSU starter, that’s perhaps the biggest difference between his mindset now compared to last year. The game has slowed down for him. Because of that, he’s able to use Ohio State’s dynamic weapons.

Take Barrett’s first touchdown pass of the day. After the interception, he marched the Buckeyes down into the red zone and faced third-and-eight. Rutgers pass-rushing specialist Kemoko Turay had a clean lane to Barrett. With Turay bearing down on him, Barrett simply slipped out of his arms, kept his eyes downfield and hit Dontre Wilson sitting in the Rutgers secondary. Wilson then turned around and did the rest.

It wasn’t the first or last time that Barrett used his legs to get himself free and let the Buckeye skill players do what they do best.

He’s made a career for himself doing that. It’s not even highlight reel stuff when he does it anymore, especially when he does it against Rutgers. When you’re the quarterback of the No. 2 team in the country, that’s what you’re expected to do.

Barrett will probably talk more about the interception and his last pass of the day — which should’ve been picked — than he will about his new place atop Ohio State’s all-time touchdown pass leaders. Barrett’s accuracy might not be the best in Ohio State history. He’ll probably throw a few more interceptions that serve as a reminder of that. But as we saw again on Saturday, he’s learned how to make in-game adjustments and quiet any concerns of a letdown in a hurry.

After Barrett delivered a textbook two-minute drill, Meyer told ESPN at halftime what everyone has come to know.

Barrett has grown. He’s a different quarterback than the one who set the B1G record for touchdowns in a season. He’s grown into the leader that Ohio State needs to look like a national title contender.

He wasn’t always perfect in that department. Despite, his gaudy numbers, he admitted he wasn’t always assertive as a freshman. He wasn’t the leader OSU needed in a turmoil-filled sophomore season.

But Barrett made the proper adjustments this offseason. He’s going to rack up plenty more wins and plenty more touchdown passes by the time his Buckeye career finishes.

And every time he does, opposing coaches will have the same thought.