When the College Football Playoff selection committee put Texas A&M at No. 4 last week, everyone took a step back.

The Aggies, as a one-loss team, were put ahead of Washington, which was undefeated. Sure, Texas A&M’s only loss was to No. 1 Alabama, but it also only had one win against a team in the current top 25.

But the committee decided that a one-loss Texas A&M squad had better wins that undefeated Washington. That was the explanation.

We all know what happened on Saturday. Texas A&M lost and essentially ended its playoff bid, Washington pummeled another non-top 25 foe and Ohio State dismantled No. 10 Nebraska.

So by that logic, the selection committee would’ve put Ohio State at No. 4, right?

Well, that’s not what it decided on Tuesday. Instead, Washington got the nod at No. 4 and we were all left scratching our heads.

Why did the committee completely throw out last week’s logic? 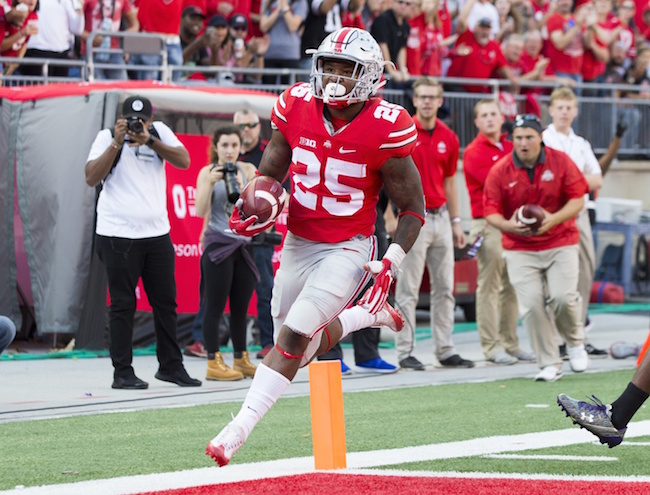 Let’s preface this by saying that if Ohio State wins out, it’ll have a good chance — not a certainty — to make the College Football Playoff. If the Buckeyes beat a team of Michigan’s caliber, they would likely move past Washington.

But it’s important to understand the committee’s rationale for putting teams in certain places. It could come down to that, especially if Ohio State is a one-loss team that doesn’t make the B1G Championship (yes, that can happen).

RELATED: Why Ohio State fans should actually root for Michigan against Iowa

CFP selection committee chairman Kirby Hocutt was asked what was different about Ohio State this week compared to last. In other words, how could OSU not be No. 4 this week when Texas A&M was last week.

His answer made no sense.

He claimed that Texas A&M’s loss to Alabama was better than Ohio State’s loss to Penn State. Nobody is saying that Penn State is Alabama, but consider this.

If that was the logic, then why wasn’t Louisville at No. 4? After all, the Cardinals were a dropped pass away from winning AT Clemson. Texas A&M’s great loss to Alabama was still by 19 points at home. Ohio State lost by three points on a couple fluky plays on the road to a team now ranked in the current top 10.

Seeing the inconsistencies yet?

Ohio State’s résumé is significantly better than Washington’s, even if one ignores the 59-point win against a team that was just ranked in the top 10. The selection committee obviously ignored that. The Buckeyes have three wins vs. the current top 25. Two of them were road wins against teams in the current top 11.

Let’s just point out the obvious. The selection committee brutally botched the initial Texas A&M ranking. It didn’t matter that the Aggies lost on Saturday. Whether the committee just did it for ratings or whatever, Washington should’ve been No. 4.

By putting Washington at No. 4 this week, this corrects that mistake. But it also shows major inconsistency at the most critical spot of the top 25. That’s worrisome.

Ohio State will downplay the No. 5-ranking, and fans will say that if the Buckeyes take care of business, everything will take care of itself. Still, Tuesday showed that even three years into this thing, we don’t have it figured out.

Hopefully the powers that be will have it squared away in the next month.