The stakes are different, but we could still get an epic Dantonio vs. Meyer clash

Urban Meyer said something on Wednesday that might’ve given a few people pause.

“(MSU) is extremely dangerous. They’re as well-coached as any team in the country,” Meyer said ahead of Saturday’s showdown in East Lansing.

Historically speaking, that comment would just be another run-of-the-mill remark about a program that’s been at the top of the college football world more often than not in the last decade.

Currently speaking, however, it’s high praise for a 3-7 team. Coaches that lead “the most disappointing team in college football” aren’t usually given that kind of a compliment.

Meyer obviously doesn’t care that the Spartans are in the midst of one of their worst seasons in program history. The fact that MSU just won its first game since mid-September — at home against Rutgers — didn’t change Meyer’s opinion of Dantonio’s ability as a coach.

The last thing Meyer or the Buckeyes can afford to do is treat MSU like an inferior team. They’ve seen that movie before. 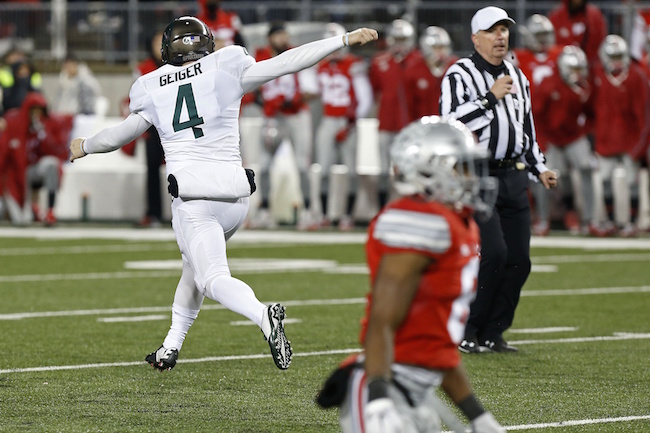 To be fair, MSU had much more talent last year when it stunned the Buckeyes in Columbus. The Spartans had quality wins vs. Oregon and at Michigan. Basically the entire defensive line was NFL-worthy, and the offensive line was one of the top units in college football.

In that regard, the circumstances are much different for this Saturday. Add to that the fact that OSU is coming off back-to-back 62-3 victories and looks every bit like a top-four team.

But Meyer is determined not to let that cloud his thinking.

He was out-coached by Dantonio last year. Any game in which Ezekiel Elliott only has 12 carries and Ohio State doesn’t win by 40 is proof of that. With a backup quarterback, Dantonio drew up the only game plan that would’ve worked that rainy afternoon in Columbus.

You know Meyer remembers the 2013 B1G Championship game like it was yesterday. We all remember when the Spartans spoiled Ohio State’s national title bid and Meyer’s postgame pizza eating went viral.

Woke up and had the Urban Meyer Breakfast of Champions. Cold pizza has never tasted better. #WeAre # pic.twitter.com/TK3HW0DMAN

Meyer has had too many depressing moments at the hands of Michigan State to take Dantonio lightly. Dantonio’s career has been defined by those victories against Meyer’s Buckeyes.

The list of coaches who have had significant success against Meyer isn’t very long. In fact, Dantonio represents a quarter of it:

Coaches who have multiple wins against Urban Meyer in his 15 years as a head coach: Nick Saban, Les Miles, Tommy Tuberville, Mark Dantonio

The opposition might not be what it’s been in years past, but Meyer still believes he has to beat Dantonio. The reason that MSU was in the College Football Playoff discussion two months ago wasn’t because people were sold on the talent of team’s new faces. They were sold on Dantonio. They believed in his ability to maximize talent unlike any coach in the country.

Obviously it didn’t work out like that, but Dantonio isn’t trying to maximize talent for a whole season anymore. He just needs to do it for a 60-minute window in East Lansing on Saturday.

RELATED: How much did Iowa’s stunner vs. Michigan shake up the B1G picture? A lot

We often seem to forget that’s all it takes. Nothing about what Iowa did in the previous two months — or even the previous week — suggested that it would be able to stay on the same field as Michigan. The Wolverines had future NFL players all over the field and Jim Harbaugh, who many feel is a top-three coach in the country.

But for one 60-minute window, Kirk Ferentz got his team to play at a different level. He recognized that Michigan couldn’t stop Akrum Wadley between the tackles. Iowa knew that it could generate pressure on Wilton Speight. When Keith Duncan made the game-winning field goal, the college football world was left wondering what just happened.

That all comes back to coaching. Michigan State doesn’t have to be better than Ohio State at every position or even at the majority of positions. Dantonio and Meyer are where they are because of their ability to recognize a weakness and exploit it.

That’s what Dantonio is going to try and do on Saturday.

Perhaps that involves a heavy dose of L.J. Scott to wear down the OSU front seven. Maybe we see the Spartans load the box like they did last year and force J.T. Barrett to take some shots deep. Dantonio could even pull out the two-quarterback system to try and confuse the Buckeye defense.

For the first time in a Dantonio-Meyer clash, one team has nothing to lose. This isn’t the unofficial B1G East title game or the B1G Championship game. It’s still amazing to think that MSU won’t even make the Quick Lane Bowl.

You’ve already heard a million times — you’ll hear it a million more — that the Spartans have nothing to lose on Saturday. Ohio State is the team with the do-or-die College Football Playoff implications. Will the stakes dictate either game-plan?

That we don’t know. What we do know is that Dantonio vs. Meyer has been arguably the best coaching rivalry in college football in the last five years.

Meyer isn’t expecting that to end on Saturday.