The next Percy Harvin? Curtis Samuel has been that and more so far

Raise your hand if you’ve heard the Curtis Samuel-Percy Harvin comparisons. Is that everyone in the room? Oh wait, you in the back…did you have your hand raised back there? Yes, you did. OK, so we’re in agreement. We’ve all heard Samuel compared to Harvin, right?

This offseason, that comparison was being thrown around by everyone. It didn’t matter that Samuel had only 899 yards from scrimmage in two seasons with the Buckeyes. Given his skill set, it was natural to assume that Samuel would thrive as Urban Meyer’s H-back, just like Harvin did eight years ago at Florida.

At the time, that might’ve seemed lofty. Harvin was the guy who averaged 1,463 yards from scrimmage and 13.5 touchdowns in his final two seasons at Florida. The Buckeyes have had special talents at H-back — Braxton Miller could’ve thrived with another year or two at the position — but finding someone to truly embody that role hasn’t been easy since Meyer got to Columbus.

Well, until Samuel came along.

He still has a long way to go to live up to the Harvin comparison, but if the first three weeks of 2016 were any indication, Samuel and Harvin will be linked even more as the season progresses. 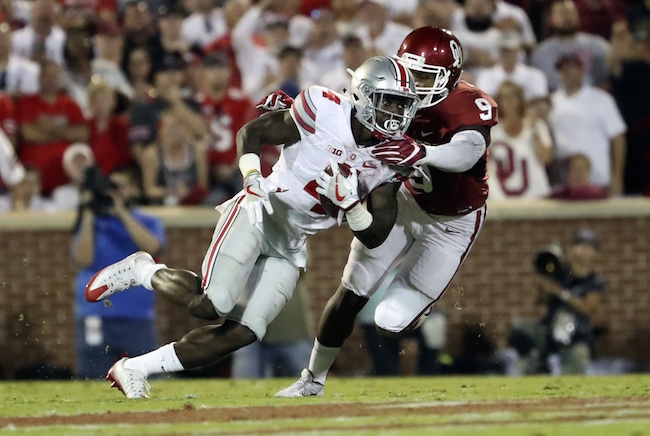 Despite all the hype about his talent, we didn’t see Samuel get regular touches in 2015. Part of that was Miller, and part of that was the Ohio State offense struggling to feed all of its stars. Samuel only got more than five touches from scrimmage once all of last year, and that was against Hawaii.

RELATED: After demolition of Oklahoma, you better believe Ohio State is a title contender

Samuel’s pace is torrid. In a 12-game schedule (OSU will likely get at least 13 games), he’s on track for 1,040 rushing yards and 1,036 receiving yards. The odds of him finishing in the 1,000-1,000 club aren’t great. Considering the fact that nobody in the history of college football has accomplished that feat, bet the under. Samuel would have a Heisman Trophy waiting for him if he did.

But more than numbers, it’s the usage that makes college football fans flash back to Harvin when they watch Samuel. Remember watching Harvin rip off runs like this?

It was customary to see him line up in the slot, motion into the backfield, take the zone read and rip off 50 yards like it was nothing.

Hmmmmm, didn’t Samuel do that exact thing against Oklahoma? Yes, he definitely did:

How do you stop that?

All the OSU offensive line did was set an edge at the 35-yard line and Samuel scored untouched. Even more impressively, they did that on the short side of the field For most receivers or running backs, that’s maybe a 15 or 20-yard gain and then they get pushed out of bounds. There are few guys in America who would’ve been able to get upfield like Samuel did.

That’s what makes his role unique. Like Harvin, most of his damage will come outside the hashes. The problem is that there’s no real way to know what to expect or when to expect it. He runs a variety of routes, both out of the backfield and out of the slot. Some are quick slants between the hashes, some are post corner routes.

Even Rutgers coach Chris Ash, who should know how to defend against Samuel as much as anyone, will still likely struggle to come up with an answer. Samuel isn’t some 6-5 stud receiver who can be shut down by an elite corner. It takes a complete defensive effort to contain him. As we saw with Harvin, there’s usually not an individual matchup that makes any sense.

It’ll be interesting to see how B1G teams try and account for Samuel. By now, coaches are used to game-planning for Meyer’s offenses at Ohio State, but he hasn’t had a guy who has grasped and executed the H-back role quite like Samuel has.

Much like Tim Tebow was back in 2008, J.T. Barrett will be the household name that will be at the top of the scouting report. As long as the Buckeye offense is dominating and the team is winning, he’ll get the majority the accolades.

People watched that Florida team closely often came away thinking that Harvin — not Tebow — was the best player on the field. Many would argue that Samuel — not Barrett — has been the Buckeyes’ best player in their 3-0 start.

We’re still waiting to see if Samuel can be that for an entire season. For now though, the Harvin comparison is the only comparison.