If it hadn’t already, it’s safe to say the Dwayne Haskins hype train left the station on Saturday.

The redshirt freshman quarterback shined in Ohio State’s spring game. His 255 passing yards and two touchdowns confirmed to many that he’s the Buckeyes’ quarterback of the future.

Some watched the spring game and took it a step further.

Former Ohio State star and Fox college football analyst Chris Spielman said on “105.7 The Zone” in Columbus that the sky is the limit for Haskins: 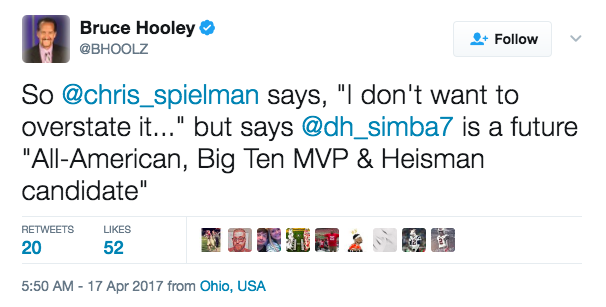 For what it’s worth, Urban Meyer said after Haskins signed with Ohio State that he was the most talented quarterback prospect he had ever recruited. That’s a group that included the likes of Alex Smith, Tim Tebow, Cam Newton and J.T. Barrett.

Spielman has seen Haskins more than a typical fan or former player with his access to Ohio State practices, so he’s certainly informed.

Still, Haskins has yet to take a snap against a live college football defense. And though he looked extremely confident on Saturday, he played against a young secondary in base defensive packages while wearing a black jersey.

The former Under Armour All-American is undoubtedly talented, and he makes deep balls look easy. But based on how good Joe Burrow also looked on Saturday, there’s no guarantee that Haskins is Ohio State’s starter after J.T. Barrett leaves.

The Haskins hype train will likely continue to gain momentum in Columbus. It appears Spielman already took on the role of conductor.