This time of year, anything can be used as motivation. Seasons and often college careers, are defined in bowl games.

Sometimes that in itself is motivation. Perhaps guys are looking to boost their NFL draft stocks. Maybe there’s some pre-bowl bulletin board material. Even an awards snub can serve as motivation.

It did for Tim Tebow back in 2008. When Sam Bradford won the Heisman Trophy ahead of him, he got a flurry of text messages from his Florida teammates. All were focused on adding fuel to the fire to beat Bradford’s Oklahoma squad in the national championship. Urban Meyer’s team did that.

This year, Meyer is on the other side of the coin. On New Year’s Eve, his squad will face Heisman Trophy runner-up Deshaun Watson in the Fiesta Bowl. The Clemson quarterback won’t need any extra motivation against Ohio State with a national championship berth on the line.

But is history on Watson’s side? 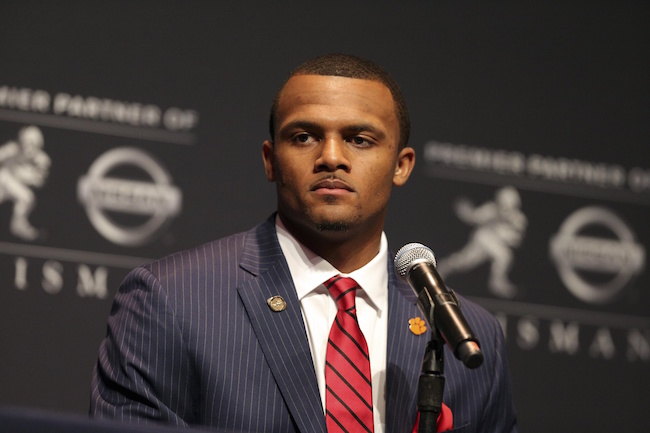 To be fair, Tebow wasn’t technically a Heisman runner-up like Watson. And back in 2008, Tebow faced the Heisman winner, which Watson will not. He already beat Lamar Jackson’s Louisville team in the regular season. That’s why Watson’s team is in the College Football Playoff.

If one only focused on recent history, it’d be easy to assume that Watson will go off against the Buckeyes. After all, that’s what the last two Heisman Trophy runners-up did in their bowl games.

But in terms of dominant performances in winning efforts, those two cases aren’t exactly the norm for Heisman snubs:

A 4-6 mark doesn’t really suggest much of anything. And sure, the performances from McCaffrey, Gordon and Luck (2010) were impressive, but those games didn’t have national title implications.

If you want to go through history and find Heisman runners-up dominating in national championships, you can. Vince Young did it in 2005. Tommie Frazier did it 10 years earlier. Maybe the Heisman snub did provide the boost they needed to win it all.

That could be the case for Watson, who came home from New York empty-handed in back-to-back years. He won the Davey O’Brien Award — with 15 interceptions — but he and his team have heard plenty of criticism for not looking as dominant as some expected them to.

Who knows? Maybe that will give Watson the chip he needs to deliver another impressive postseason performance.

What we do know is that he hasn’t seen a defense like Ohio State’s all year. He lit up a Boston College defense that ranks eighth in total defense, though they didn’t have the four- and five-star athletes that Ohio State does. The season-opener against Auburn might’ve been the best test Watson saw all year, and he was held to 248 passing yards, one TD and one interception.

But Watson is still the guy who racked up nearly 500 yards from scrimmage in a national championship loss to Alabama last year.

That should be a better source motivation than not winning the Heisman.