It wasn’t bulletin-board material, but it might’ve caught a few people by surprise.

Jabrill Peppers was asked about containing Curtis Samuel, who has been arguably the B1G’s best offensive player in 2016. The dynamic H-back is the only player in America with 500 rushing and receiving yards. He’s unlike any player Michigan — or anyone, really — has seen.

Peppers, as expected, acknowledged Samuel’s skillset. Like Samuel, Peppers is an East-Coast guy who knows about all of the top talents in the area.

But Peppers also said that he didn’t think Samuel had been hit very much in 2016. The Michigan linebacker then went on to say that the plan is to be as physical as possible with the likes of Samuel and the rest of Ohio State’s skill players. That, he said, could allow the Wolverines to replicate the defensive success had against OSU by the likes of Northwestern, Penn State and Wisconsin.

Before Samuel deals with Peppers, he’ll have to overcome his biggest challenge yet. That is, getting open against Jourdan Lewis.

The All-American Michigan cornerback is “postive” he’ll be on Samuel. In other words, we’re going to watch two All-Americans run all over the field on Saturday.

On this Thanksgiving weekend, we should all be thankful for that. 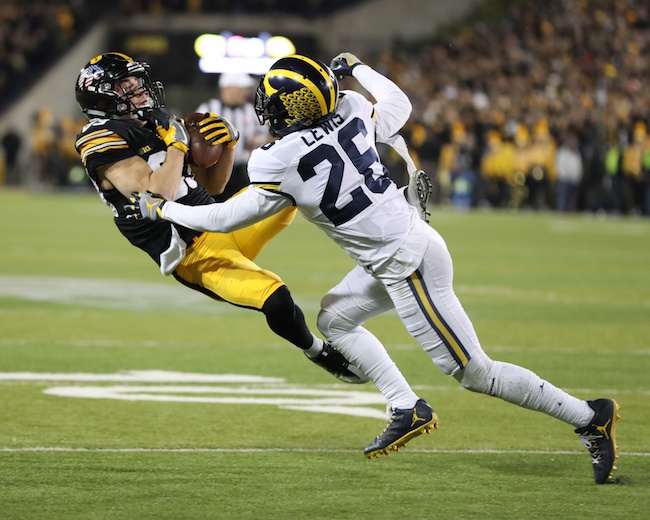 Lewis and Samuel will both be pushed more than they’ve been in 2016. Samuel hasn’t faced a lockdown corner of Lewis’ caliber and Lewis hasn’t been asked to shadow a weapon like Samuel.

Regardless of how many elite players both squared off with, both have been dominant. In 2016, Lewis was actually more-likely to touch the ball on a pass than the opposing receiver. He surrendered just eight catches for just 78 yards all year. Earlier in the week, he became Michigan’s all-time leader in pass breakups.

But that was mostly against prototypical wideouts. Samuel, of course, is anything but.

“His athleticism, really, and people forget about their technique and things that got them there before when they’re looking at a great athlete like that,” Lewis said of Samuel. “They just throw it all out the window and just like, ‘let me get this guy covered,’ and not think about their technique.

“That’s one of the reasons why he is one of the best. He’s so athletic and can get in and out of his breaks.”

Ohio State figures to put Samuel all over the field in an effort to shake him free of Lewis. If the Buckeyes do line him up in the backfield, Lewis will have help.

But based on the numbers recently, Samuel might not be in for many carries on Saturday:

Through that Wisconsin game, Samuel averaged 10-plus carries per contest. Since then, he averaged just four.

Could it be because OSU wants to protect Samuel? Are more teams successfully shadowing him like Michigan is expected to do?

Urban Meyer didn’t want to break down the exact reason for Samuel’s limited backfield carries as of late.

“Defenses are … yeah, they’re forcing something,” Meyer said Monday. “I don’t want to get too detailed, but, no, it’s not by design.”

RELATED: Is Curtis Samuel an All-American? His case keeps looking better and better

Perhaps Meyer just threw a changeup and he’s been saving Samuel’s 20-touch game for Michigan. But if Samuel does get the ball 20 times against Lewis, it’d be a significant accomplishment.

We don’t know how Meyer plans on getting Samuel his looks. We do know that Lewis leads the top-ranked pass defense in the country. We also know that J.T. Barrett is a 33-percent passer on balls of 20-plus yards in B1G play.

We have, however, seen Samuel have more success downfield the last two weeks:

Against Michigan State, Samuel’s score didn’t come from press coverage. He got a 10-yard cushion and still made MSU pay. Maryland tried to press him, but did so unsuccessfully.

How will Lewis play him? Peppers already preached physicality when covering Samuel. Does that mean Lewis will press him and force Barrett to make over-the-top throws? It could. Samuel is still most dangerous when he gets the ball in space. Barrett has trust in Samuel to make a play in 50-50 situations, too.

It’s still a mystery how Lewis pulled that off. If he makes a play like that on Saturday, you’ll see it on highlight reels for decades.

Lewis or Samuel could be in for one of those classic moments. This rivalry lends itself to them. And in terms of individual matchups between these two teams, there haven’t been many as good as this one in a while.

Everyone is going to want to talk about Wilton Speight’s health, Barrett’s accuracy or Peppers’ Heisman campaign. But Lewis and Samuel should have all eyes on them Saturday.

The Game finally has The Matchup we’ve all been waiting for.