Urban Meyer's extra-time record is insane, but will that give Ohio State the edge?

It’s hard to ignore. You can break down all the film and pregame quotes you want, but it’s hard NOT to keep coming back to this one thing.

Give Urban Meyer more than a week to prepare, and he figures it out nearly every time.

What does that mean? That the guy has a really good bowl record? Yes, Meyer’s 9-2 bowl record is impressive. The three national titles aren’t too bad, either.

But it’s more than that. Add in the season openers, the games off a bye week and the random weeks with more than seven days to prepare and you get a near lock.

Meyer has a 44-3 mark in those situations. 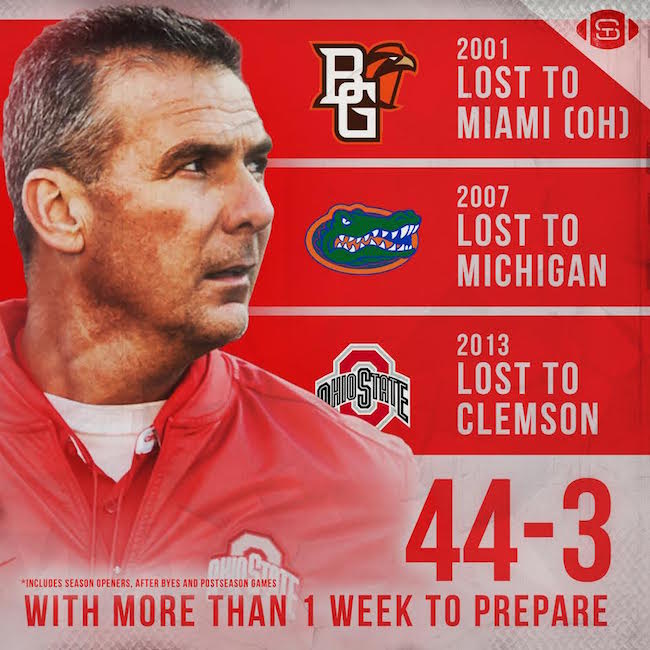 That’s the hard thing to ignore.

In case you haven’t noticed, Ohio State had ample time to prepare for its College Football Playoff semifinal matchup against Clemson. The Buckeyes had even more time than Clemson because they missed out on the B1G Championship.

There’s something to be said for that. It’s one thing to face a man many believe is the second-best college football coach in the country. It’s another to try and beat him with ample time to game-plan.

RELATED: Dabo Swinney trying to get an edge by reading Urban Meyer’s book

That’s not to discredit Dabo Swinney. Swinney and Nick Saban who are the only coaches in America with back-to-back College Football Playoff appearances. And ironically enough, it was Swinney who handed Meyer his last more-than-a-week-to-prepare loss.

So Meyer’s record is by no means an iron-clad thing.

But if you’re wondering how the Buckeyes are going to show up on Saturday night, don’t expect a repeat of Michigan State’s Cotton Bowl egg from last year. With all due respect to Mark Dantonio, he was out-coached by Nick Saban and Lane Kiffin.

The question is obviously what has Meyer been able to fine-tune in the last month. As much as he’d love to have a legitimate vertical passing game, the chances of J.T. Barrett coming out and tossing 50-yard bombs are slim to none. Though that’d certainly quiet Jadar Johnson.

Meyer got extra time to think about how he’s going to get Curtis Samuel 20 touches. That has to happen, right?

He and his staff also had extra time to game-plan for Deshaun Watson. The Buckeyes fared well the last time they faced an elite quarterback — Baker Mayfield struggled against Ohio State’s “basic” defense — though Watson has a different skill-set. A month of drawing up different packages to confuse the Clemson quarterback still might not be enough.

RELATED: Why there should be no pressure on Ohio State in College Football Playoff

But back to the offense, because that’s really what sets Meyer apart in bowl games. At Florida and Ohio State, Meyer’s teams averaged 38 points per bowl game. After that Orange Bowl loss to Clemson in 2013, Meyer’s teams scored at least 42 points in each bowl game.

Obviously every team is different. There’s no guarantee that Meyer’s team continues that trend. Meyer’s 20-0 record suffered its first blemish at Penn State this year. At the time, that seemed unfathomable.

Losing to a quality Clemson team wouldn’t be a stunner by any means. As slight favorites, perhaps Vegas knows a thing or two about Meyer’s extra-time record. Who knows? 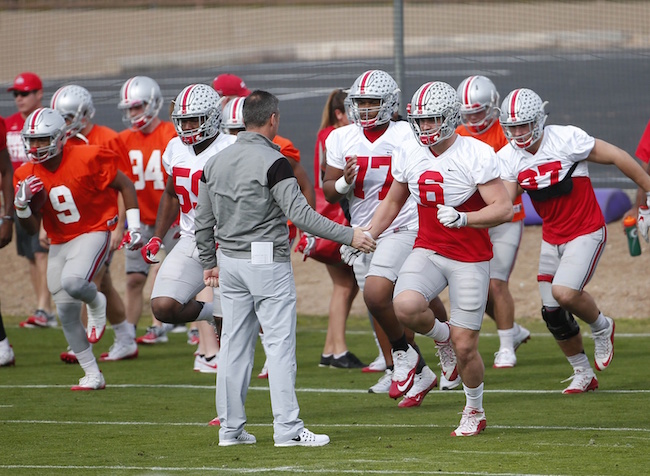 Spreads have been especially useless in bowl games. Predicting how 18-22-year-old kids are going to show up with a month layoff for a non-New Year’s Six game is a crapshoot.

The circumstances are obviously different this year. It shouldn’t take much to motivate a team playing in a national semifinal.

Will there be key moments when we’re reminded of Meyer’s ability to prepare? Or will Saturday bring flashbacks of Michigan State and Penn State, when the play-calling was questioned throughout the game?

Fortunately, we no longer have to wait more than a week to find out.