Ohio State has released its status report for the Sugar Bowl, and the Buckeyes will officially be without 11 players against Clemson.

According to the official status report (shared by 11 Warriors), Ohio State will be missing starting offensive lineman Harry Miller and key running back Master Teague. Defensive lineman Zach Harrison is another crucial player that is unavailable for the College Football Playoff semifinal.

Here’s the status report for the Buckeyes: 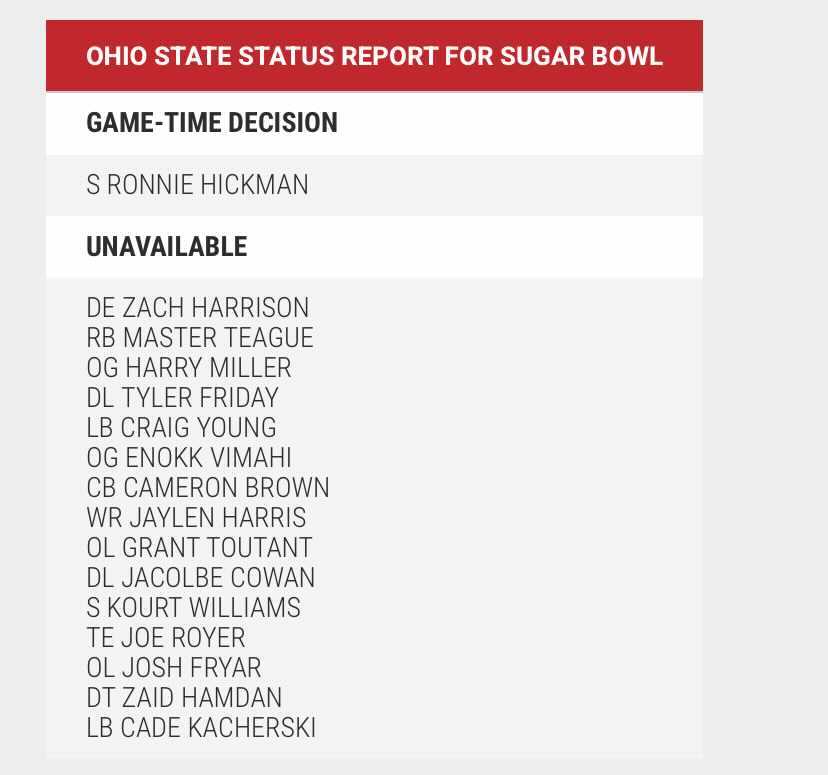 Most notably not on the list is star receiver Chris Olave who was out for the B1G Championship Game against Northwestern. Key players Baron Browning and Drue Chrisman also are not listed as unavailable against Clemson and should be back in action.

Though Trey Sermon stole the show with a record-breaking performance in Indianapolis, not having Master Teague is a hit to Ohio State’s depth. Teague played in tandem with Sermon for much of the season, finishing second on the team with 449 rushing yards and leading the team in rushing touchdowns with six.

On the defensive side of the ball, the loss of Zach Harrison hurts a unit that will be trying to corral star quarterback Trevor Lawrence and star running back Travis Etienne. Harrison led Ohio State this year in TFL with 4.5 and finished tied for third in sacks with 2.0.