Is it the hard thing to do? Absolutely, but firing Urban Meyer is what Ohio State needs to do

It’s easy for me.

All I had to do was read Brett McMurphy’s report that showed Urban Meyer lied at B1G Media Days when he said that he didn’t know about Zach Smith’s domestic abuse allegations in 2015.

For someone like myself, who was in Chicago when he heard Meyer say that he got a text late Monday night about the 2015 allegation against Smith and that he “didn’t know who creates a story like that,” it wasn’t difficult to come to a conclusion.

It won’t be as easy for Ohio State to see that. After all, we’re talking about a coach who led the program to a 73-8 record (including an absurd 47-3 vs. the B1G), 5 top-10 finishes and a national title. Not only did Meyer rebuild the program that was left in the wake of the tattoo scandal from the Jim Tressel era, he turned Ohio State into a juggernaut that appeared to have no end in sight.

But now, even Ohio State has to see that enabling an assistant coach accused of domestic violence and then lying about it — that’s according to some extremely damning text messages in McMurphy’s report — is a fireable offense.

Who creates a story like that? I’ve got a better question.

Before you defend why Meyer deserves to keep his job at Ohio State, think about where your allegiances lie. Read the entire report from McMurphy and tell me that you legitimately believe Meyer was completely in the dark about a coach who was on his staff for 11 years. The same coach who, as Meyer admitted to, he and his wife Shelley got counseling for back at Florida in 2009 after the first domestic abuse allegation came to light.

That’s what Ohio State — if it does keep Meyer on board — will use as its defense. If you’re defending Meyer, you’re mistakenly treating this as hearsay and not as actual text messages that McMurphy obtained: 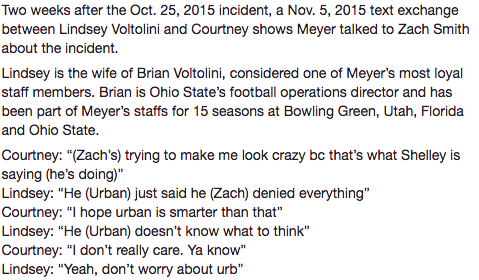 If that isn’t damning enough, this surely is:

If the Buckeyes are going to defend Meyer’s absence of knowledge and hold on to the belief that Shelley Meyer never told her husband about what she knew, they’re essentially set to call Lindsey Voltolini, the wife of longtime Meyer staffer Brian Voltolini, a liar. You know, along with Courtney Smith’s claims in McMurphy’s report.

Sure, Ohio State. Try and take that stance.

That’d be awfully ironic coming from the same school that has the words “TREAT WOMEN WITH RESPECT” on the wall of the Woody Hayes Athletic Complex. It’s already ironic that the same coach who has a “zero-tolerance policy” against domestic violence apparently turned a blind eye to an assistant with multiple allegations against him.

Meyer clearly has a tolerance for domestic violence. He’ll tolerate coaches who aren’t convicted of an actual crime as long as they can recruit like Smith.

What Meyer won’t tolerate is someone “who creates a story like that.” McMurphy didn’t “create a story.” He simply told the story that Meyer, the late Earle Bruce and others tried to cover up.

If that doesn’t give off strong “I’m above the law” vibes, I don’t know what does.

It’s an entirely different subject matter with different implications, but wasn’t that the sickening reality of the Joe Paterno cover-up of the Jerry Sandusky child abuse scandal? When a coach makes a decision to protect the good of his football team instead of looking out for the dangers of an individual, that’s a scary, scary place to be.

This wasn’t about whether Smith’s presence was putting any players in danger with his alleged behavior. Meyer’s wrongdoing was his denial. It was a denial that he heard about the allegations against Smith in 2015, as Voltolini texted he did through conversations with Meyer’s wife, Shelley. It was a denial that the 2009 incident was something that warranted further action other than the counseling. Denial led to enabling, and now here we are.

If Ohio State does deny Meyer’s role in this, it might as well send out a release with the following message:

The Ohio State athletic department has decided that head football coach Urban Meyer has been granted full permission to do whatever he wants. Meyer has done nothing but win since arriving in Columbus in 2012, and therefore, any reported wrongdoing of his shall henceforth be overlooked.

But back to reality. Ohio State’s new reality is that it has a choice to make about its head coach.

The last time that happened was in 2011. That was when the “Tattoogate” scandal at Ohio State took over college football. That involved Tressel covering up the free tattoos several Ohio State players received in exchange for memorabilia.

Then-Ohio State President E. Gordon Gee was asked about Tressel’s status with the program, which prompted an infamous response.

“I’m just hoping that the coach doesn’t dismiss me,” Gee said of Tressel in 2011.

Ohio State athletic director Gene Smith is not dealing with someone who covered up student-athletes getting free tattoos. He’s dealing with a man who preached integrity and transparency, yet reportedly lied about knowledge of domestic violence allegations against another man who was his longest-tenured staff member.

Lesser coaches have been fired for far less than Meyer, but that’s beside the point. All that matters is what Meyer did. Or rather, didn’t do.

It’s time for Ohio State to do something, no matter how hard it is.