As of Wednesday afternoon, neither Ohio State nor Urban Meyer has publicly addressed the claims that the OSU coach knew of former assistant Zach Smith’s history of domestic abuse. The claims were brought to light in a bombshell report by Brett McMurphy and an interview with Smith’s ex-wife on Stadium.

The lack of any statements or actions out of Columbus isn’t stopping online bookmakers from setting odds on Meyer’s future and who might replace him as Buckeyes head coach. Earlier Wednesday, MyBookie revealed odds on whether Meyer would be fired or not, whether he would resign or not and if he would cite health concerns while resigning from OSU. BetDSI has taken it a step further, setting odds for Meyer’s chances of coaching in Week 1 as well as potential replacements.

The list starts with conventional hypothetical candidates such as Greg Schiano, Kevin Wilson and Ryan Day, but also includes some truly wild names such as Houston Nutt, Nick Saban, Jim Harbaugh and James Franklin. But, if you have a hunch Saban, Harbaugh or Franklin would leave their current job to go to OSU in by Sept. 1, you can potentially turn $100 into $20,000. You probably have better chances of seeing a bag with $20,000 fall out of the sky and land on your doorstep, but the bet is available nonetheless.

It is interesting that BetDSI is giving better odds to Meyer being retained than being fired or resigning, opposite of the MyBookie odds. 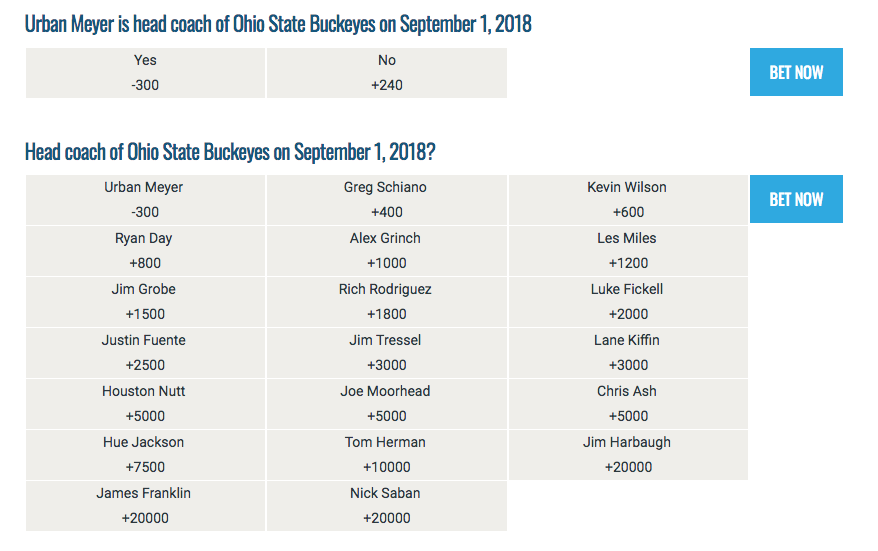