Just like 2015, Ohio State is back to playing not to lose

It was cliché before the season even started. Even a casual college football fan probably got sick to it.

The “Year of the Wolves” was the rallying cry Ohio State used to try and get back into the “hunter” mindset. For the first seven weeks of the season, the Buckeyes practiced what they preached. Some argued that Ohio State deserved to be No. 1. The 2016 Buckeyes looked even better than the 2014 Buckeyes.

But what in the world happened to that the last two weeks?

After Ohio State’s historic collapse at Penn State, the thought was that Urban Meyer’s squad would play angry against Northwestern.

Instead, the Buckeyes played like a team desperate to hold on. They squeaked past an improved Northwestern team, but OSU didn’t look like an angry team at all.

It felt like 2015 all over again. The Buckeyes played like a team that had something to lose. If not for a couple key plays late, they would’ve lost everything. 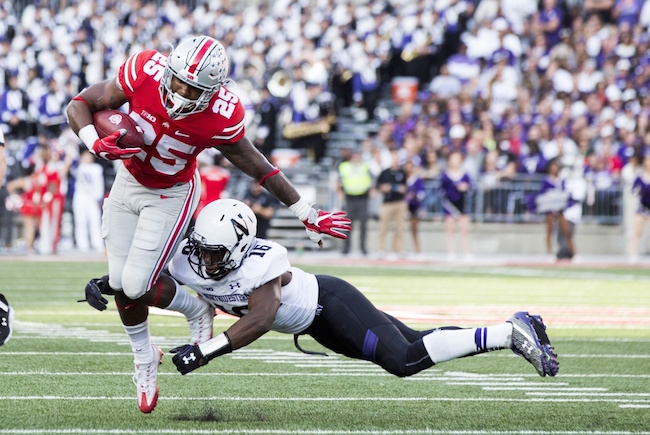 It’s worth noting that the Northwestern team that lost at home to Illinois State was not the same team that was in Columbus. The Wildcats played like a top-25 team the last month and are better than their record would indicate.

Austin Carr is a legitimate All-America threat, and frankly, the Buckeyes don’t have anyone that can get separation like he does. That was what stood out the most on Saturday.

Urban Meyer has been saying for weeks that his receivers have been struggling to get separation. Once again, that was the case on Saturday. And if they were open, J.T. Barrett couldn’t make some of the touch throws he made two weeks ago in Madison.

The Buckeyes looked extremely conservative for the second straight week because of their inability to stretch the field. They don’t have a true jump ball receiver, and against teams that force them to throw, it shows. That obviously limits what a play-caller can draw up.

RELATED: By beating Michigan State, Michigan gets past another key hurdle

But what was odd was that Ohio State didn’t seem to want to use the weapons it does have, especially Curtis Samuel.

A week after he didn’t touch the ball until the 24th play against Penn State, the Buckeyes again were conservative with their best offensive player. Samuel didn’t operate as a running back like he did early in the season. On Saturday, he got just one carry in the first half.

While he saw more work, Samuel still only got six carries in the second half. One of those went for 23 yards and the other went for a score. Sure, Samuel was the leading receiver with seven catches for 68 yards. But he was the only player in America with 400 receiving yards and 400 rushing yards entering Saturday.

Why has his usage been so spotty lately?

OSU’s mysteriously conservative game plan wasn’t just offensive. Why was it such a struggle for the OSU defensive line to generate pressure on a so-so B1G offensive line? We know that OSU struggles against mobile quarterbacks. That was no different against Clayton Thorson, who scampered for 44 yards.

Still, if not for Barrett’s 35-yard run on OSU’s last series, the Buckeyes would’ve been out-gained by Northwestern. At home.

A few weeks ago, we were talking about this secondary as one of the best groups in the country. On Saturday, Thorson picked up big third down after big third down. He nearly led the Wildcats all the way down the field for a game-tying touchdown.

For the second straight week, Ohio State was fighting for its life in the final minutes. This time, the Buckeyes squeaked out with a win and kept their playoff dreams alive.

Days ahead of the first College Football Playoff poll, OSU didn’t look like a playoff team. Like 2015, Saturday was about surviving. Ohio State played like a team nervous about suffering its second loss. Instead of flipping the switch and going back into “us against the world” mode, the Buckeyes tightened up.

If OSU is going to make a playoff push, it won’t be by playing like it did on Saturday. That much was obvious. There’s a team in Ann Arbor that’ll embarrass the Buckeyes if they play that tight. Shoot, the team in Lincoln would fare pretty well against that OSU team.

Meyer knows that after two lackluster efforts, his team has adjustments to make. He can start by bringing back that cliché mantra.

If the Buckeyes don’t get back to hunting, this won’t be another one of Meyer’s one-loss teams.