When things got tough this time, so did Ohio State

That had to be on the minds of Ohio State fans as Michigan State took over at its own 20-yard line with two minutes left. Just like last year, the Spartans were going to march down the field, make a game-winning kick and end OSU’s season.

Everything MSU did to that point — run the ball and play solid defense — looked like another back-and-forth battle that Mark Dantonio was going to find a way to win.

National pundits had their “so long, Ohio State” tweets fired up in their drafts. Another promising OSU season would end at the hands of MSU.

In that moment, it didn’t matter that the Spartans were 3-7. Nobody was thinking about the fact that MSU’s only B1G win was against Rutgers. The fact that Ohio State came into East Lansing as a three-touchdown favorite after back-to-back 59-point wins was moot.

Well, MSU fans found themselves saying those four words once again, but not in a good way. Instead, Tyler O’Connor’s comeback effort consisted of one sack, one fumble and one interception.

When Gareon Conley came down with the game-sealing interception, all of those pregame thoughts resurfaced. Oh yeah, that’s why MSU was 3-7. That’s why OSU has three defensive backs that could get drafted in the first round.

And that’s why Ohio State is still in the playoff hunt and MSU is about as far away from it as possible. 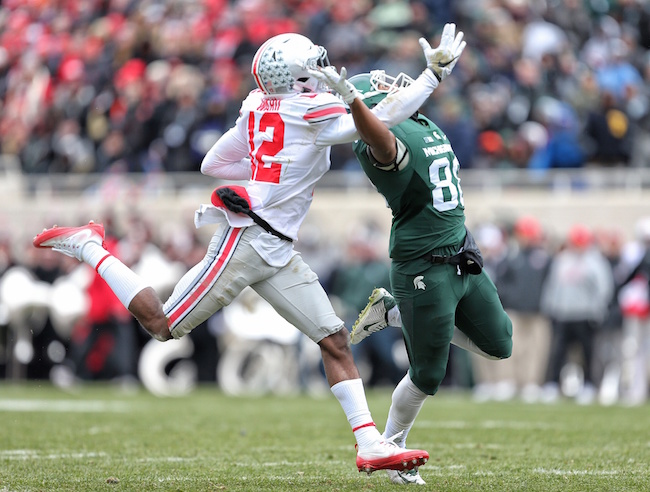 Forget style points. Ohio State wasn’t in search of any of those on Saturday. Getting out of East Lansing with a win was the only thing that mattered.

Urban Meyer and Mark Dantonio talked all week like a playoff spot was up for grabs. Based on the way both teams played, it was easy to assume that much.

MSU finally embraced its spoiler role and played like a team that had nothing to lose. L.J. Scott went 2015 B1G Championship-mode and put the Spartans on his back. An MSU defensive line that hadn’t had a sack in a month got to J.T. Barrett three times. The same Spartan offensive line that was lifeless against Illinois and BYU had all sorts of life.

But this time, the Buckeyes refused to become a national punchline.

The OSU defensive line that was dominated down the stretch against Penn State took over. The poor special teams play that resulted in OSU’s only loss was nowhere to be found. Instead, the Buckeyes didn’t fall victim to the team playing with nothing to lose.

That attitude was why Dantonio went for the two-point conversion instead of tying it up with four minutes left. Was it the wrong call? Perhaps, but Ohio State still had to come up with a play in a high-pressure spot.

The same was true on Conley’s interception:

Ohio State hasn’t been consistently dominant, but it has learned how to weather the storm in key moments. If the Buckeyes do rattle off a couple wins against top-10 teams and make the College Football Playoff, it’ll have to draw on that late-game experience.

We saw how valuable late-game experience was when Michigan crumbled down the stretch at Iowa. That kind of pressure can make even the best team look average. That’s the reality of 18-22-year-olds playing in the biggest moments of their lives.

RELATED: College GameDay will be Michigan-Ohio State for extended show

Speaking of Michigan, Ohio State can finally focus on Michigan. Some national pundits might assume a close game in East Lansing was the result of OSU looking ahead. They might even drop the Buckeyes from No. 2, depending on how the rest of the day shakes out.

But that didn’t matter on Saturday. Ohio State wasn’t in pursuit of style points. Even if the Buckeyes fall to No. 3 or No. 4, they’ll still be in favorable position to make the College Football Playoff if they can beat Michigan, with or without a B1G East crown.

No, Saturday wasn’t about picking up another blowout win. It was about OSU dealing with crummy weather and winning a game on the road on a day in which it didn’t have its best stuff. If Michigan pulls out a win against Indiana, the focus will shift to another classic chapter in college football’s best rivalry.