Ohio State never had anywhere near a playoff-caliber offense, and it showed

Throughout most of 2016, Ohio State fooled us. The Buckeyes didn’t trick us into thinking that they were one of the nation’s best teams. They were. You don’t beat three top-10 teams and get left out of the final four.

But that was because of the Buckeye defense. Let’s not fool ourselves into thinking Ohio State was a solid offensive team.

If it was, OSU would’ve found a way to capitalize on prime opportunities on Saturday night. It didn’t matter that the Buckeye defense had two first-half interceptions and set up major possible turning points. That was the remedy for the Buckeyes’ offensive woes all year. Shoot, that was the case against TULSA.

It took a Clemson defense full of future NFL players to expose OSU’s offense for what it was — one-dimensional, inexperienced and non-playoff caliber.

As a result, the Buckeyes never had a chance on Saturday night. 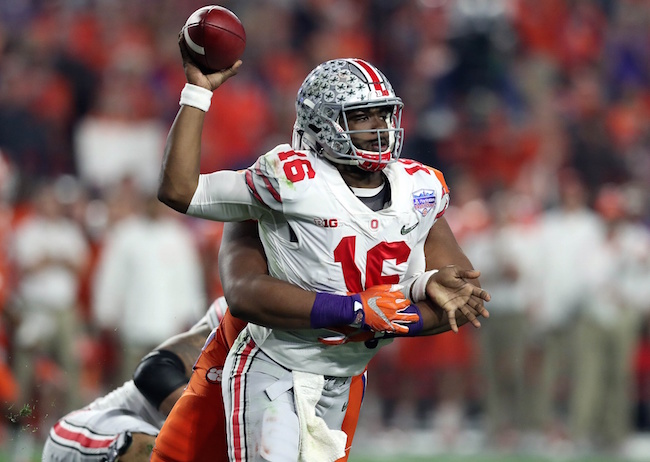 I know what the numbers said. Ohio State was No. 20 in the country in total offense entering Saturday night.

But look at the games that Ohio State DIDN’T get a pick-six in — Rutgers, Indiana, Wisconsin, Penn State, Northwestern, Maryland and Michigan State. Maryland and Rutgers were the only games that weren’t complete struggles.

Ohio State’s offense never looked good against even an average defense when it didn’t get a defensive touchdown. Think about that.

And what that Oklahoma win earlier in the season? The Sooners had the 119th-ranked defense. Everyone threw on them.

Many thought the Fiesta Bowl could’ve played into Ohio State’s hand. Deshaun Watson threw 15 interceptions in 13 games. The thought was that if Ohio State could take advantage of that, it would be the difference.

Watson even threw the Buckeyes a bone by tossing a pick on his first pass of the night. What did Ohio State do with it? Nothing. Well, unless a missed field goal is something.

And what did OSU do with the second Watson interception? Three and out.

Without that big defensive boost, Ohio State was exposed for what it was — a vanilla, one-trick pony offense. Unfortunately for the Buckeyes, their only pony — Curtis Samuel — was draped by other top-shelf Clemson defenders all night.

A lot of things are responsible for an offensive collapse like that. OSU had the youngest team in America entering 2016. That showed. The Buckeyes still struggled to find a possession receiver. And their redshirt freshman tailback, Mike Weber, fumbled twice and picked up an unsportsmanlike-conduct penalty.

Inexperience was there. That’s for sure. 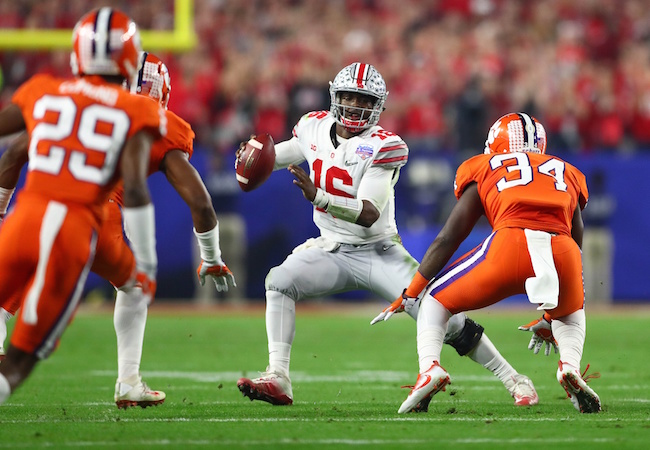 But simply playing in that game and getting waxed isn’t going to make Ohio State’s offense better. J.T. Barrett struggled with his decision-making, and the Buckeye coaching staff struggled to get anything going in the middle of the field.

That was as humbling of an experience as OSU could’ve asked for. And for Meyer, that was a wakeup call.

That’s a frustrating reality for a team that’s had no shortage of offensive talent the last two years.

Saturday night will serve a purpose for Meyer. He’s been too dominant for too long not to make necessary offensive adjustments after a display like that.

We don’t know for sure that Barrett or Samuel will be back. It remains to be seen what kind of personnel changes this team will go through. Improved offensive line play with the loss of Pat Elflein won’t be easy, either.

Ohio State must change it’s offensive mindset if it’s going to compete for national titles. That’s the standard. Meyer knows it. Being shut out for the first time in his career in a College Football Playoff game will fuel those adjustments.

If not, don’t expect OSU to crash Clemson and Alabama’s party anytime soon.