It was over early, but there was still significance in Ohio State's blowout win

In the middle of the third quarter, it was as loud as ever. On the ESPN broadcast, you could make out the chant clear as day.

Back and forth it went, much like the wave in a boring game. The Buckeye fans invaded College Park and dominated the crowd like they’ve done at countless B1G venues before.

Saturday might’ve lacked suspense, but while it might’ve seemed like another ho-hum OSU blowout against a lesser-talented B1G team, there was plenty to gain from Saturday’s beatdown. 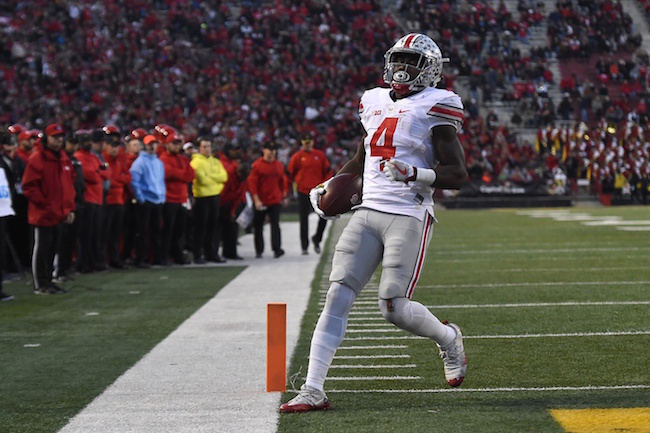 Saturday had the feel of an early-season non-conference game. Ohio State essentially did the same thing to Tulsa and Bowling Green, albeit on the road against a B1G team.

Still, it wasn’t September. It was November. It wasn’t any time to be messing around. In case you forgot, it looked like Ohio State did that throughout October.

If the Buckeyes came out and struggled to build a lead, it would’ve been concerning.

Why? Well, we saw what Michigan did to Maryland just last week.

The Wolverines stomped the Terps in every way possible. The deep ball worked, the blitzes worked and everything Jim Harbaugh drew up worked. Michigan rolled to a 59-3 victory and looked every bit like a title contender.

Did Ohio State have to beat Maryland by more than 56 points to prove it was better than Michigan? No. Anybody that uses that basis to judge a team is lazy.

But the Buckeyes did have to dominate Maryland and put the game away early. OSU has to keep pace with Michigan. All of those doubts about whether or not OSU was on the same level as Michigan would’ve creeped back in with a lackluster effort.

Instead, we saw Urban Meyer use Curtis Samuel effectively. He had three touchdowns and added to what’s already been an unprecedented season. He even looked like a legitimate deep threat:

Samuel’s dominance was part of a bigger trend OSU was hoping to achieve on Saturday. Against Maryland, you want your best players to look like All-Americans.

That’s what we saw.

J.T. Barrett lit up the Maryland secondary. Mike Weber didn’t run like someone nursing a shoulder. Marshon Lattimore was opportunistic yet again.

Meyer said that last week was the first time all year that his group played nine units strong. They certainly were again on Saturday.

Lost in the shuffle of last year’s tumultuous season was the fact that by not blowing teams out, Ohio State didn’t get as many chances to put in its second and third-stringers as it would’ve liked to.

RELATED: Maryland still where it needs to be with DJ Durkin

Everything OSU could’ve wanted out of Saturday — except for the shutout — it got. It wanted a boring, blowout victory.

Will a win against Maryland convince the College Football Playoff selection committee that OSU should be in the top four? Of course not. But OSU still could’ve hurt itself and showed some weaknesses heading into matchups against Mark Dantonio and Jim Harbaugh.

Everybody is waiting for November madness. OSU was on the bad end of that last year. Frankly, the only madness Ohio State wants to witness is from a couch. The Buckeyes got a chance to kick back and relax on Saturday.

If OSU has it its way, it’ll be boring all November.