Chris Fowler had a factual mistake in his pregame stand-up shot on Saturday night. In previewing the Nebraska-Ohio State game, Fowler said that it was a game between “two teams that controlled their own divisional destiny.”

Wait, isn’t that what Kirk Herbstreit said, too?

Just facts. Ohio St controls its own destiny. But needs to play MUCH better before they worry about playoff rankings. https://t.co/n6EhyDejG9

That is factually incorrect.

Fowler and Herbstreit assumed what many have been guilty of the last few weeks. That is, if the Buckeyes win out, they’ll be in the College Football Playoff. With a win against Michigan, there’s no way the Buckeyes wouldn’t leapfrog the Wolverines and take the B1G’s spot in the playoff, right?

Not so fast. Ohio State does not control its own divisional destiny. Yes, there’s a scenario in which OSU could win out and still miss out on a B1G Championship and the College Football Playoff.

That’s why Ohio State should actually root for Michigan against Iowa. While the Wolverines losing would make many Buckeye fans happy, it would actually hurt OSU’s playoff chances. Let me explain.

Everyone assumed that 11-0 Michigan vs. 10-1 Ohio State would face off for the B1G East title and possibly a College Football Playoff bid.

Well, what if Michigan isn’t undefeated? What if the Wolverines were to fall at Iowa this weekend and sit at 10-1 entering the regular-season finale against Ohio State? Even if the Buckeyes were to beat Michigan and Penn State won out, here’s what the top of B1G East standings would look like (with B1G records).

With Michigan suffering its second conference loss, there wouldn’t be a three-way tie. Instead, it would be a two-way tie with Ohio State and Penn State. Who would have the head-to-head advantage there?

Oh, yeah. Penn State would have that.

That would mean the Lions would win the B1G East and play in a B1G Championship while Ohio State would be at home as a one-loss, non-division champ for the second year in a row.

Don’t worry. We made sure Herbstreit was aware of his mistake, which he admitted to.

@KirkHerbstreit OSU isn’t in control of destiny. If UM loses before finale & falls to OSU, UM has 2 losses. PSU has one & wins tie-breaker.

Sorry to assume UM would be 11-0 on the 26th-Was referring to a potential 3 way tie-But, clearly the UM/Iowa game has big implications! https://t.co/j7L4ef0rse

Herbstreit is right. There are big implications for the Michigan-Iowa game this Saturday night. Besides the Wolverines wanting to maintain control of their own destiny, the ripple effect is greater than many realize.

A lot of that has to do with Penn State. The Lions are the talk of college football as winners of five straight. What’s left on the schedule for the Lions? Three games against teams with a combined 3-15 B1G record. Penn State will be favored to win every game left in the regular season.

Why? As the B1G confirmed two weeks ago, a three-way tie would likely go to the fifth tiebreaker of overall win percentage. PSU, with two losses already, would be eliminated against one-loss Michigan and one-loss Ohio State. It would then go back to the original tiebreaker of head-to-head, which would give OSU the advantage.

A three-way tie is the best-case scenario for Ohio State. That means Michigan has to be 11-1. Sure, Buckeye fans can root against Penn State all they want and hope to go that route. But the chances of PSU losing are not great. The chances of Michigan beating Iowa are much better. And even if Michigan loses every game, it still would come down to a two-way tie with Ohio State and Penn State. 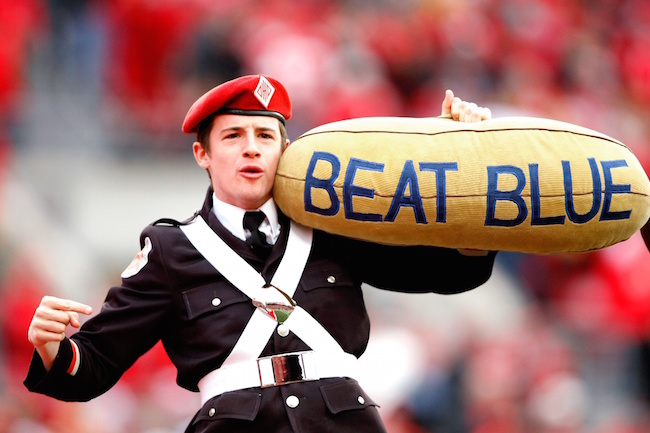 It’s an odd scenario, no doubt.

Some might say that OSU is fine to make the playoff even if it doesn’t make it to the B1G Championship. The Buckeyes would certainly have a solid résumé and they would be in the discussion.

But how many non-conference champs have made the final four? Zero. How many teams that failed to make it to the conference title game ever made the playoff? Zero.

There’s a reason for that. Let’s say that Alabama, Clemson and Washington — all of whom are undefeated — run the table. They’re in. That means there’s only one spot left, presumably for a B1G team. It gets extremely murky from there.

Or what about if Wisconsin runs the table and knocks off Penn State in the B1G Championship. Do the two-loss Badgers — with more wins vs. top-20 teams than anyone — get left out?

We don’t know the answers to those questions. We know that if Ohio State doesn’t earn a trip to Indianapolis, it’s by no means a lock to make the field. Just like 2014, it would be left up to chance. And this time, OSU wouldn’t get a chance to win by 59 points in a conference title game.

OSU doesn’t control its own destiny. If it did, it could turn into Iowa fans and root for the Hawkeyes to stun the Wolverines on Saturday. But that’s not the case. The Buckeyes need Michigan to continue to be Michigan for two more weeks. If Penn State stubs its toe, this argument, of course, is moot.

Nobody is saying OSU fans should trade in their scarlet and gray for maize and blue. But on Saturday night, they should consider the big picture and put the rivalry on hold.