Ohio State wins The Game you had to see to believe

When Curtis Samuel scampered in for the game-winning touchdown, Urban Meyer dropped to the turf.

It wasn’t out of desperation. Certainly every prayer Ohio State prayed on Saturday was answered, and then some.

Meyer’s look was that of stunned disbelief. His team knocked off Michigan in a game that’ll be remembered by college football fans forever. When Meyer hangs it up one day, he’ll remember that moment of collapsing to his knees and realizing that his team somehow came out ahead in what might’ve been the greatest game in college football’s greatest rivalry.

He survived a classic and did what many Buckeye fans throughout the world did. That’s what four hours of heart-pounding, tension-filled football will do to a man.

This time, Meyer and the Buckeyes were on the better side of a last-second play in November. As a result, their College Football Playoff hopes are alive and well. Somehow, someway, Ohio State pulled off a miracle.

Improbably, The Game did more than live up to the hype. It provided more can’t-believe-it moments than many will probably remember.

Even if Meyer just remembers that last one, that’ll be good enough for him. 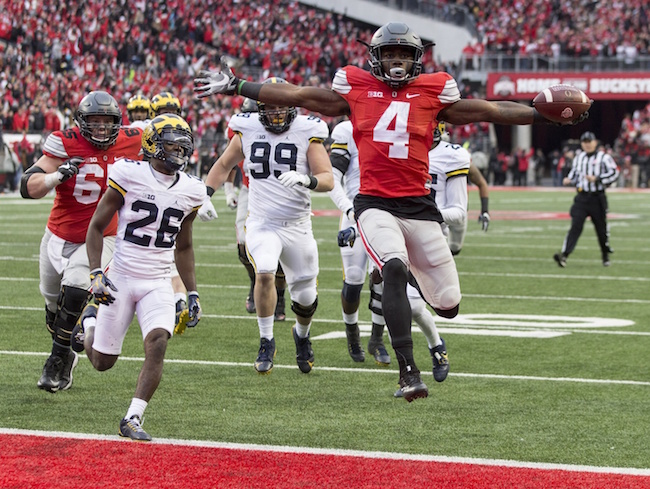 To say that what happened on Saturday was great theater would be the understatement of the century. Shoot, that might’ve been the game of the century. It was that kind of bout between two of college football’s most historic programs.

A comeback, a back-and-forth overtime period, make-or-break fourth-down plays and a thrilling walk-off touchdown defined a legendary battle. Like another make-or-break game that was decided in the state of Ohio in November, it was one of those games that no one deserved to lose.

Many Michigan fans, players and coaches felt that they certainly didn’t deserve to lose. There were questionable calls that will be debated until the cows come home.

Was that pass interference on Ohio State? Did J.T. Barrett really get the first down? Why was Jim Harbaugh flagged for slamming his headset?

Harbaugh was told that slamming his headset would’ve resulted in a technical in basketball, so that’s why he got the unsportsmanlike conduct penalty. Either way, it was part of the turning point of the game.

Everyone was praising Wilton Speight for his heroic effort to play despite not having a healthy shoulder. But his interception to Jerome Baker gave a lifeless Ohio State squad all the life it needed.

But make no mistake, a game like that isn’t decided because of the mistake of one player. If that was the case and Ohio State ended up losing, Tyler Durbin would’ve received all the blame.

Durbin wasn’t necessarily at fault for a rushed field goal attempt that led to the stunning touchdown return against Penn State. Go look at Ohio State’s official stats and he isn’t even credited with a missed field goal. But on Saturday, he had two missed kicks, including one that would’ve tied the game late in the fourth quarter.

It would’ve been a shame if that game was decided by a kicker. With all due respect, a kicker did not deserve to be the story of that one. And sure enough, Durbin came back and provided the game-tying boot to force overtime.

Saturday was about two playoff-worthy teams battling in a game that was as even as humanly possible. Ohio State out-gained Michigan 280-279 in regulation. Barrett was awarded the first down with his fourth-down keeper in overtime by about the closest margin possible.

RT if this first down was the worst call ever https://t.co/gI9uv3xxhb

Or how about the fact that was the first overtime game EVER in 113 meetings between Michigan and Ohio State? And you mean to tell me there was a potential College Football Playoff berth at stake?

Come on, now. That type of stuff doesn’t happen.

Certainly it wasn’t the College Football Playoff selection committee writing that script. Now their situation gets murky. With Michigan State and Penn State still battling, there are multiple scenarios that could warrant putting two B1G teams into the field. Michigan even pleaded its case to keep its playoff hopes alive after that battle.

But before any of that is sorted through, Saturday should be appreciated for what it was.

Classics like that don’t come around very often. Some will debate whether or not that game was better than 2006, which was dubbed “The Game of the Century.” This year’s contest was certainly more thrilling, though its hard to quantify the magnitude that Bo Schembechler’s death had on that atmosphere.

Saturday was the thriller college football fans hoped they would get when Harbaugh came to Ann Arbor two years ago. This was called “Year 2” of this rivalry. Based on the way that things played out, it wouldn’t surprise anyone if another 10-year war was ahead.

In many ways, Saturday felt like a 10-year war. Each team laid it all on the line for something that was far more than bragging rights. Ohio State players will tell their grandkids they were part of that game. The record number of people that crammed into Ohio Stadium will, too. That number will probably multiply over the years.

Regardless of what happens the rest of the way for Ohio State, Nov. 26, 2016 will always be a special day. The Game added yet another historic chapter to its rivalry.

That was The Game.