Entering Saturday, you had pretty much seen it all from Ohio State. That’s why they were the No. 2 team in the country.

Everyone knew that the Buckeyes could take over a game with their defense. After what they did in Oklahoma, there wasn’t any doubt about whether or not their show traveled well. Their 4-0 start showed balance and dominance in the running and passing game.

Nobody wondered whether or not the Buckeyes would beat Indiana at home. The spread was four touchdowns. But the Hoosiers did something that not even Oklahoma could do.

They made Ohio State win ugly. Yes, a 38-17 victory was still ugly for the Buckeyes. But that’s not a bad thing. 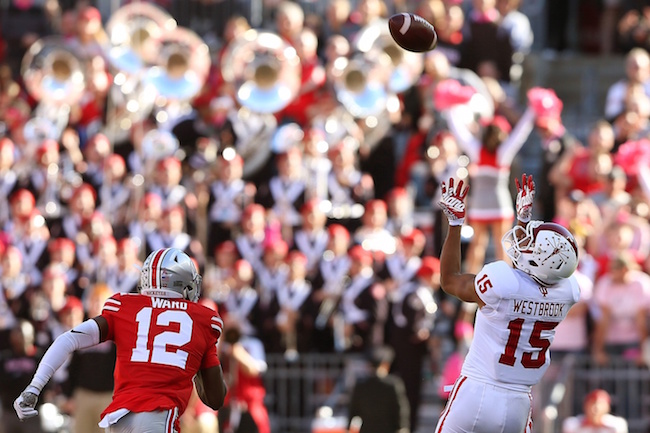 If you paid attention on Saturday, you saw that Ohio State was frustrated for most of the afternoon. It was one of those days in which neither side of the ball got into the rhythm it was accustomed to. That’s a credit to Indiana.

So why didn’t powerhouse OSU look better against a team it hadn’t lost to since 1987? Well, that’s complicated. For starters, IU’s defense checked the boxes that Meyer said it would.

OSU couldn’t get anything going in the passing game. J.T. Barrett — the guy who set the program record for touchdown passes last week — didn’t complete a pass in the second or third quarter. Meyer all but gave up on the pass because of the job that the IU corners were doing on OSU’s outside weapons.

Barrett only finished the day 8-for-20 with 91 yards, a touchdown pass and an interception. Those aren’t exactly Heisman numbers. He didn’t have it on Saturday. Instead, he ran the ball.

Barrett’s 26 carries were the most of his career. The last time he ran that much was when the Buckeyes infamously stubbed their toes against Virginia Tech in 2014.

But what this group did on Saturday, while it wasn’t always pretty, showed why it’s far more complete than most realize.

The defense delivered a good, not great, effort against the Hoosiers. At least by their impossibly high standards. Richard Lagow capitalized on some favorable field position and connected with Mitchell Paige to make it a one-score game near the end of the first half.

Instead of going into the half up a touchdown and wondering what was going on, Parris Campbell returned the ensuing kick 91 yards and set up an OSU score. The Buckeyes actually scored in the final two minutes of the first half in every game this season.

Those are the little things great teams need to do when they aren’t rolling like they usually do. Those are winning plays. So was Sam Hubbard’s blowup of Ricky Jones on a third down tunnel screen . That was essentially the same play that burned the OSU secondary at the end of the first half.

OSU finished off IU’s last-chance ditch at an upset bid by stuffing Devine Redding on fourth down. Will that show up in the highlight reel? No, but it closed the door on a hard-fought victory.

RELATED: Whatever chip Michigan State had is gone

The Buckeyes aren’t always going to have their best stuff. Indiana’s improved defense made sure of that. Adjustments will be made, and in a perfect world, games like that wouldn’t exist. But they do. And as much as teams love comfortable blowout victories, this is still a young team that hasn’t had to play in a close second half. OSU could easily find itself in that kind of spot next week in Madison.

Saturday served a purpose for OSU. Grinding out wins isn’t fun, but sometimes, it’s essential. As long as it doesn’t become a regular occurrence like it did last year, it’s not a concern.

If their first four games were any indication, this team has plenty more comfortable wins in its future.