Six weeks ago, it was a nice crossover.

Sure, it was already set to be a night game on ABC. But that didn’t mean it would have big-time implications. It could’ve been a de facto playoff eliminator game for OSU. Even if the Buckeyes came into Madison undefeated, it was supposed to be nothing more than a tricky game against a less-talented team in a raucous venue. Then everyone would remember that Urban Meyer doesn’t lose B1G road games and it would be back to what we thought it was.

But calling Saturday “a nice crossover” would be like calling Jump Around “a decent college tradition.” The stakes have been raised for Saturday. Throw out the preseason narratives. Ohio State and Wisconsin aren’t just playing to pick up a nice victory. They’ll battle for a signature win. It’ll be a chance for either team to say to the College Football Playoff selection committee, ‘How do you like me now?’

For a regular season game, it doesn’t get bigger than what’s expected at Camp Randall on Saturday night. In fact, it’ll be the B1G’s biggest showdown in a decade. 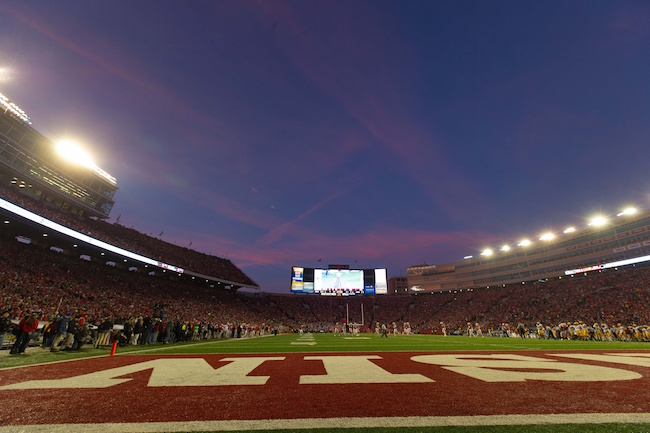 That sounds lofty. It’s easy to get caught in the moment with statements like that. Surely, that’s not the first time that’s been said in the last 10 years.

But let’s not be prisoners of the moment and examine what’s at stake for both teams in this one.

For Wisconsin, it’s obvious. A win, and the Badgers are immediately inserted into the top four with control of their own destiny. A loss, and that incredible start is for naught. The Badgers could still have a chance to go to the Rose Bowl, but any dreams of breaking into that upper echelon of college football powers is out the window.

Ohio State also needs to get a win in Madison to control its own College Football Playoff destiny. Can the Buckeyes still make the playoff field with one loss? Certainly, but if Alabama, Clemson, Washington and Baylor run the table — all Power Five undefeated conference champs — then there’s a chance OSU gets left out.

Yes, we all remember 2014. OSU edged out one-loss TCU and narrowly squeaked into the field. There are certainly no guarantees that happens again. And in OSU’s perfect world, it doesn’t leave anything up to chance.

So yes, you have two teams legitimately competing for College Football Playoff spots in mid-October. That was the case two weeks ago in Ann Arbor when Michigan and Wisconsin faced off. Both came in as undefeated top-10 teams.

One could argue that the stakes are the same as they were for the Wisconsin-Michigan showdown two weeks ago. But that was two weeks earlier into the season. And honestly, both teams could’ve lost and stayed in the playoff picture. That’s not the case for Saturday.

The same argument could be made for the 2011 game between Nebraska and Wisconsin. At the time, it was a battle for B1G supremacy and a potential path to a national title. Many in Madison are saying that this is the biggest game at Camp Randall since that night.

Wisconsin fans will remember this fondly:

Never mind the fact that it was a blowout and that Nebraska went on to lose four games that season. This is about pregame stakes. So why didn’t it get the edge?

Then why not Penn State-Ohio State back in 2008? A No. 3 vs. No. 9 matchup two weeks later into the season than Saturday’s showdown should’ve given that game the edge, right?

As you’ll hear Lee Corso say at Bascom Hill on Saturday, not so fast.

It’s easy to forget that in 2008, college football was still under the BCS format. While unbeaten Penn State had a national title shot, OSU had less of a chance to earn a title berth with one loss already. Even if they beat Penn State and won out, the Buckeyes still would’ve needed help to crack the title game that year.

That’s the beauty of the playoff system. Ohio State and Wisconsin both know undoubtedly that if they run the table, they’ll be in the field, no questions asked. Both have quality early-season résumés and both would likely pick up a few more top-25 victories if they were to win this Saturday and every Saturday after.

These fan bases know what’s at stake. The college football world knows what’s at stake. That’s why College GameDay is going to be at Madison. That’s why some are predicting the craziest atmosphere they’ve ever seen at Camp Randall. If Wisconsin is close or even leading at the end of the third quarter, Jump Around might shake your TV.

Everyone is eager to see how this dominant Badger defense will match up against a couple of Heisman Trophy candidates in J.T. Barrett and Curtis Samuel. And on the flip side, how will Alex Hornibrook handle the nation’s top scoring defense in his third career start?

We have a little longer to wait until we find out answers to those questions. But there’s one question that’s already been answered. For a B1G regular season game, does it get any bigger than this?