Parents of Ohio State football players have another bone to pick with B1G commissioner Kevin Warren.

This week, Eleven Warriors obtained thousands of documents through the Freedom of Information Act (FOIA) related to the B1G’s push to cancel the 2020 fall football season, as well as responses from staff members at Ohio State. Part of those messages included messages between athletic director Gene Smith and president Kristina Johnson, explaining that Warren thought a letter written by the football parents of the Buckeyes was “manufactured.”

It was disheartening to read reports that our efforts in August 2020 to @bigten Commisioner, @KevinFWarren were met with claims that our letter was "manufactured". Read our full statement in response to @SInow article. #Fight #BigTenParentsUnited pic.twitter.com/Lt4jZmUevT

The parents are asking Warren to “Reflect, Adjust, Communicate and Do Better” in the letter.

Ohio State football parents were one of numerous groups to write letters and protest the B1G’s decision to cancel the 2020 college football season because of the pandemic. Eventually, the league reversed course and implemented a nine-game schedule beginning in October.

Below is the complete letter: 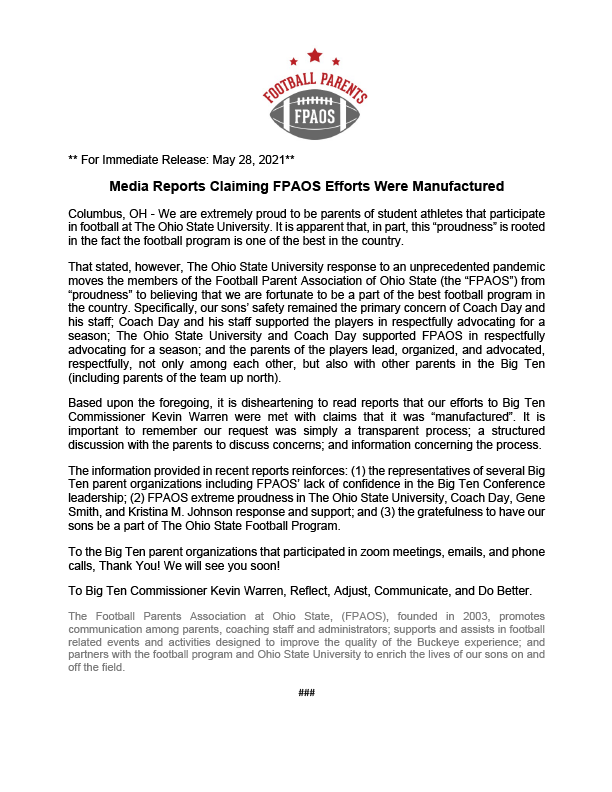 TRENDING
37,042 READS
Queue the QBs: Who will be next to earn James Franklin's trust and the monster opportunity that goes with it?
13,993 READS
Aidan Hutchinson announces arrival, records 1st tackle for loss in preseason game vs. Falcons
11,043 READS
Kirk Ferentz on preseason polls: 'Talk about a waste of time'
LATEST NEWS
View All
7 hours ago
Bret Bielema updates status of Solo Turner's eligibility waiver
7 hours ago
Kirk Ferentz says Iowa would be 'stupid' to redshirt true freshman DL in 2022
7 hours ago
Michigan lands 14th commitment for 2023 with pickup of TE out of California
7 hours ago
Bronny James reportedly pursued by multiple B1G programs if he goes college route
8 hours ago
Bob Bostad, Wisconsin o-line coach, not comfortable with depth chart for Badgers
8 hours ago
Jim Leonhard discusses injury status of veteran DB for Wisconsin
VIEW MORE