Is Curtis Samuel an All-American? His case keeps looking better and better

When Ohio State was stunned by Penn State, there were several complaints that fans had with the coaching staff.

Why didn’t the Buckeyes try to take shots downfield? Why did Urban Meyer try and pull off a rushed field goal attempt? Why didn’t OSU bring in increased protection when the Penn State defensive line took over?

Those were all questions on the minds of Buckeye fans after a dumbfounding loss to what looked like at the time, a mediocre Penn State squad.

But the biggest question was why it took 24 plays to get Curtis Samuel the ball. Sure, the Buckeyes targeted Samuel, but he didn’t get any carries.

Meyer faced plenty of criticism for that decision. It seemed crazy. Why wouldn’t arguably the best offensive player in the B1G — it’s either Samuel or Saquon Barkley — get a touch until the middle of the second quarter? That wouldn’t ever happen to Barkley, or Christian McCaffrey or any other dynamic weapon like Samuel.

Since that Penn State game — Samuel still ended up the team’s leading rusher and receiver in that one — Meyer made sure that his best player wasn’t invisible. The H-back got 14 touches against Northwestern and 13 against Nebraska. All he did with those 27 touches was rack up 277 yards and three touchdowns.

The majority of that damage was done against Nebraska, in which Samuel accumulated 137 receiving yards, 41 rushing yards and two touchdowns in a 59-point OSU victory. That earned him co-B1G Offensive Player of the Week honors.

Speaking of honors, Samuel could be due for another one soon — All-American. 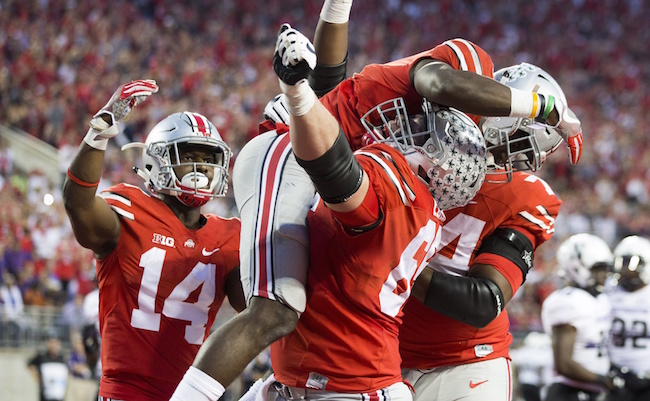 No, they don’t list “H-back” as a position on All-America teams. And barring an epic collapse, Jabrill Peppers has the “all-purpose” slot filled on the first-team.

But Samuel is doing things that we haven’t seen since you-know-who. Yes, Percy Harvin.

RELATED: The next Percy Harvin? Curtis Samuel has been that and more so far

In nine games, Samuel averaged 66.6 rushing yards and 75 receiving yards. Nobody would be surprised to see the junior finish the season on that kind of pace.

Instead of projecting, let’s look at the body of work Samuel already put together. Even through nine games, it’s special (all stats via sports reference).

Ok, you get it. Samuel is a rare player in the era of specialization. His offensive versatility is off the charts. That’s why Meyer announced he’s giving Samuel a chance to return punts. He might finish with 2015 Christian McCaffrey numbers, but he’s that type of playmaker.

Samuel is the only Power Five player with five rushing touchdowns and five receiving touchdowns. He’s also one of only three players in the country with 40 carries and 40 receptions in 2016. One of them is Virginia’s Taequan Mizzell. He averages 5.84 yards per touch. The other is Middle Tennessee’s I’Tavius Mathers. He averages 7.3 yards per touch.

It’s absurd what this guy is doing from a statistical standpoint. But even if you aren’t a numbers person, just watch some of the plays he makes:

Those were top-15 teams that Samuel did that to. It’s not even worth showing his highlights against Bowling Green and Tulsa because frankly, it’s not fair.

Some guys are just better football players than others. Ohio State fans are probably tired of hearing about Peppers being the best football player in the country. If he is, Samuel isn’t very far behind.

Soon enough, everyone is going to try and figure out what exactly Samuel is at the next level. Everyone will want to know how he fits into an offense. Can he line up in the slot? Will he run jet sweeps? Will he operate as more of a third-down passing back?

None of that stuff matters right now. As long as he’s in college, he’s the perfect fit in Meyer’s offense.

By season’s end, Samuel could easily be in the record books. He’ll inevitably be a first-team All-B1G selection and if national writers have been paying attention, they’ll have Samuel on their All-America teams.

If he isn’t, Ohio State fans will rightfully shift their complaints.