Has Dabo Swinney passed up Urban Meyer among top coaches in America?

Well, technically it was Tuesday morning by the time Clemson became national champions. It took nearly four-and-a-half hours for Swinney to dethrone Nick Saban. It was a battle of the two best teams in America, and fittingly, it went down to the the final second.

Swinney now has his national title and his defeat of Saban. With that, he joined an elite club of coaches to knock off Saban’s Alabama squad in the postseason:

To be the best, you have to beat the best. Despite last night’s result, Saban is still the undisputed best coach in college football. Stoops and Whittingham aren’t in the upper echelon of elite college football coaches. You have to win a national title in the last 15 years to be in that conversation.

That leaves Swinney and Meyer. A year ago, the divide between them was obvious. Meyer had three national titles to Swinney’s zero. Meyer beat Saban en route to two of his national titles (both were essentially semifinal games). Now, Swinney has his first title, and he took down arguably Saban’s best team to get it.

Get ready to see an interesting debate unfold across college football. Is Swinney now a better coach than Meyer? 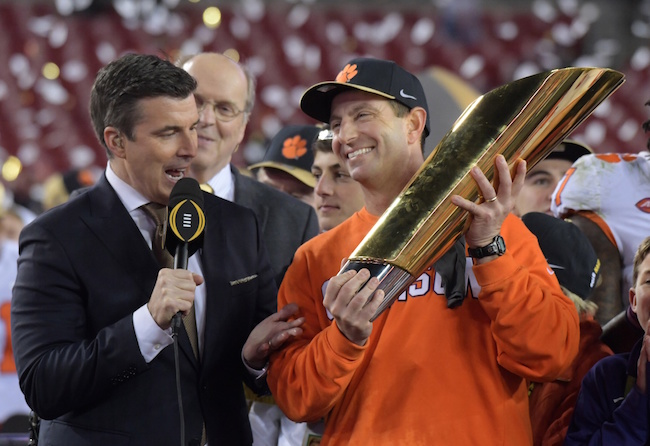 For some, it’s an open-and-shut case. Three national titles compared to one should still give Meyer the overall edge. Sure, the Fiesta Bowl was historically ugly, but that doesn’t outweigh two more national titles, right?

That argument can certainly be made. But there’s another argument.

Swinney’s success in the last three years is actually right on par with Meyer and Saban. The numbers prove that to be true:

For recruiting purposes, those numbers are huge for Swinney. That’s proof that despite the endless amount of talent that came through Alabama and Ohio State the last three years — 20 five-star recruits for Alabama and his team has been at the same level as both teams.

And to be fair, Swinney didn’t get enough credit for the talent he brought in. It was obvious on Monday night that Clemson had some ridiculous next-level prospects. From Dexter Lawrence (how is he a true freshman?) to Mike Williams to Deshaun Watson, it became clear that Swinney had a special group in 2016.

That’s perhaps the biggest question some might have about including Swinney among the likes of Meyer and Saban. Clemson had 14 players drafted each of the last two years. This year, it wouldn’t be surprising if that number reached 20.

That’s a ton of talent to replace, especially at the quarterback position. Great coaches are defined by their ability to win titles with different quarterbacks. Meyer won titles with Chris Leak, Tim Tebow and J.T. Barrett/Cardale Jones.

So far, Swinney only won big with Watson at quarterback. Does that mean Swinney will only win a title with Watson? Not necessarily, but it weakens the current case for him to be considered the No. 2 coach in college football.

There’s a reason that Jimbo Fisher isn’t in the same coaching tier as Meyer. He has one national title with one special quarterback. Since he got to Florida State in 2010, Fisher has as many double-digit win seasons and national titles as Swinney.

But until he wins the big one with someone not named “Jameis Winston” at quarterback, no one will move Fisher up to that next tier of coaches.

For now, Swinney has earned the right to be ahead of Fisher and in the conversation with Meyer. That’s what happens when you halt Saban’s dynasty and win a national title.

Some will argue that Swinney’s recent title and 2-0 postseason record vs. Meyer should be enough to move him up to that No. 2 spot. In the recruiting world, it’s a “what have you done for me lately” business. Swinney has done a lot lately — just as much, if not more than Meyer.

But once the dust settles and everything is put in perspective, three rings will still shine brighter than one.