“If you don’t win your conference, you shouldn’t be playing for a National Championship,” Meyer said in 2006.

That quote has been all over the internet in the past few days because, as Meyer’s team is playing for a College Football Playoff berth when his team didn’t win its own conference.

For whatever reason, former Oklahoma coach Barry Switzer felt the need to call Meyer out on Twitter for his quote 10 years ago: 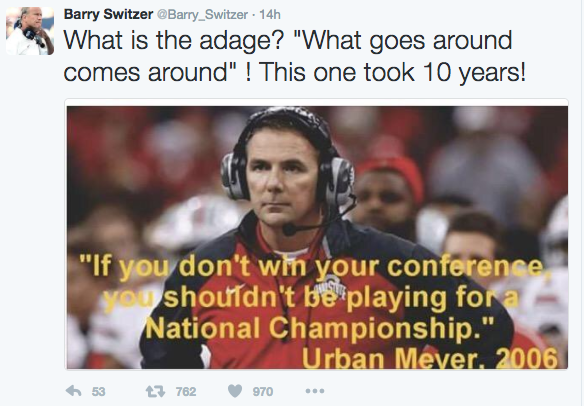 A few things. Meyer’s quote was about placing a non-conference champ in the top two, which was the system at the time. With the four-team playoff, it’s obviously a new system altogether, and Meyer’s team has the No. 3 seed.

And Switzer, who still supports Oklahoma, saw the Sooners get pummeled by the Buckeyes at home. A two-loss, Oklahoma team without a conference championship game certainly wasn’t more deserving than Ohio State, which beat three teams in the current top-10.

So Switzer’s argument probably shouldn’t be directed at Meyer as much as it is at the current system. He did say that he’s in favor of an eight-team playoff.

Unfortunately for Switzer, losing two games appears to be the determining factor for the selection committee.