If Texas A&M was No. 4, Ohio State now worthy of top-four ranking

Everyone was wondering when it would happen.

When would Ohio State look like the team we saw in September? October was a grind, to say the least. The lack of a deep passing game, the lack of turnovers forced and the lack of a comfortable victory dropped Ohio State from the consensus No. 2 to No. 6 in the first College Football Playoff rankings.

On Saturday night, the Buckeyes finally looked like the team that stormed into Norman and embarrassed Oklahoma. Ohio State had a victory vs. No. 10 Nebraska locked up well before Tommy Armstrong went down with a scary injury.

In the Buckeyes’ first marquee home game, they responded in a big way. It was an explosive reminder that when this team is rolling, it’s pretty good. It was OSU’s third win against a team ranked in the top-14 of the current College Football Playoff rankings.

It was the “get-right game” that OSU had been searching for. By “get right,” OSU should’ve gotten right into the top four. 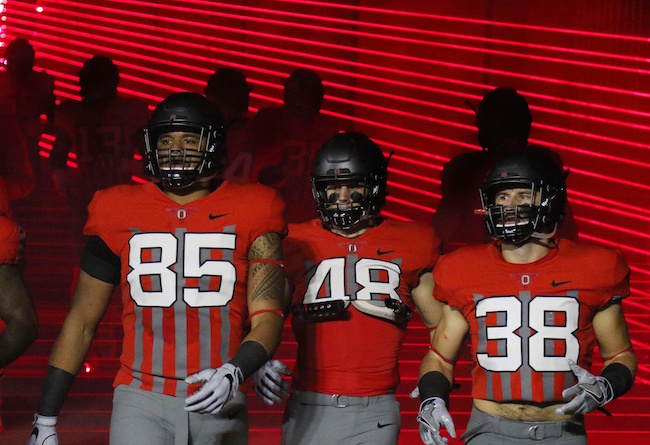 Texas A&M’s No. 4 ranking was the surprise of the first College Football Playoff poll. As a one-loss team, Texas A&M got the final spot in the final four ahead of unbeaten Washington. Right on cue, the Aggies were dropped by Mississippi State on Saturday.

The consensus thought was that Washington would move into the top four, where many felt the Huskies deserved to be.

RELATED: Why B1G might already have playoff spot locked up

But if the selection committee felt that Texas A&M was worthy of being ranked ahead of Washington, so is Ohio State, regardless of whether or not the Huskies win by 50 at Cal late on Saturday night.

Look at the reasons that Texas A&M got the nod ahead of Washington in the first place.

Well, Ohio State has all of those things and more.

That road win at Wisconsin is holding up. Or if you don’t believe in the Badgers, what about the win at Oklahoma? That obviously checked the “tough non-conference foe” box. And remember OSU’s disastrous loss at Penn State? It’s not looking so bad a few weeks later. The Lions stomped Iowa 41-14 for their fifth straight win. They could easily be in the top 10 come Tuesday.

That was all there BEFORE Ohio State beat No. 10 Nebraska like a drum. Now the Buckeyes have three victories that are better than Washington’s best victory. In fact, the Huskies don’t have any victories against teams in the current top 15. The committee punished the Huskies for playing the softest non-conference schedule among Power Five teams.

If the committee is going to stick to the logic it used to justify Texas A&M in the top four, the same argument should be applied to Ohio State. If the Buckeyes aren’t ranked No. 4 come Tuesday, that’ll be a problem. We won’t know what the committee truly values. If undefeated wasn’t the deal-breaker one week, why is it the next?

The committee will get bailed out by the belief that this will all play itself out. There’s truth in that. If Ohio State loses another game, it won’t get a top-four spot. If the Buckeyes win out, they’re likely in. But this could always happen:

Ohio State, whether it admits it or not, wants style points. The Buckeyes got those in spades on Saturday night. To be honest, OSU could’ve won by two touchdowns and it shouldn’t have made a difference.

The Buckeyes looked every bit like a top-four team on Saturday night. If the committee sticks to its guns, it’ll recognize that.

But don’t count on it.