Penn State’s case for another 2017 run got a little stronger on Sunday.

The Lions’ top defensive back, Marcus Allen, announced that he’ll be returning to State College and waiting on the NFL.

Here was the announcement Allen tweeted: 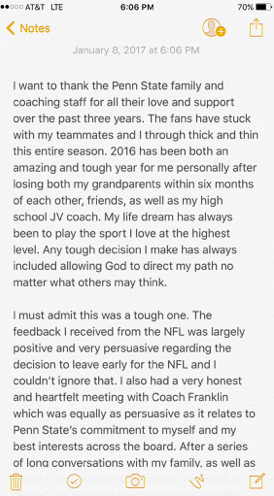 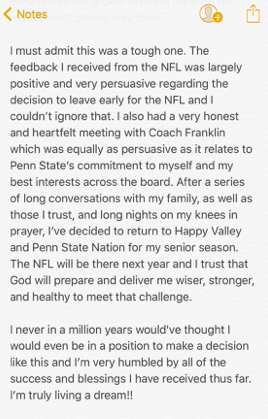 That’s a big win for James Franklin. As Allen said, he definitely had a chance to get a favorable draft grade.

Instead, Allen will return to lead the Lions’ defense. Allen can boost his stock even more if he builds off a solid junior season.

The third-time All-B1G selection led the Lions with 110 tackles, six of which were for a loss. He broke up three passes, forced two fumbles and recovered one in the back end of the PSU secondary.

Allen has been a regular starter since his true freshman season in 2014, and has played in 39 games in that stretch. With Allen back, that means the Lions will have three of their top five tacklers returning in 2017.

The Lions lost defensive end Garrett Sickels and wide receiver Chris Godwin early to the NFL. It doesn’t appear that Penn State will take any more big hits before the Jan. 16 deadline for underclassmen to declare.