Where team was when he was hired — Not out of the woods yet.

Bill O’Brien was credited for leading Penn State out of the muck from the Jerry Sandusky aftermath. He did about everything he could to prevent the Lions from completely going under, despite the fact that he dealt with a four-year postseason ban, a loss of scholarships and a major program reputation hit.

There were some who were devastated when O’Brien left for the Texans. But there were tons who were fired up by the hiring of Franklin. If O’Brien still finished above .500 during that rough two-year stretch, than surely James Franklin — who was one of the top young coaches in the country for leading Vanderbilt to back-to-back nine-win seasons — could lead Penn State back into B1G title contention.

Sure, Franklin had the ideal young quarterback in place, but losing 40 scholarships hurt. Penn State didn’t have the depth needed when Franklin took over. Yes, there was still talent (the 2013 class was ranked No. 33) but a lot of it was young.

The Lions weren’t quite ready to turn the page the way some might’ve expected them to when Franklin got to town.

After a six-win regular season, Franklin’s offense finally came together in the Pinstripe Bowl. Christian Hackenberg absolutely lit up a solid Boston College defense en route to Penn State completions (34) and passing yards (371) records. To come back from a two-touchdown deficit in the third quarter and win in overtime made it an even more memorable game.

Normally, winning a bowl game after a six-win season wouldn’t mean much to a program like Penn State. But it was an emotional scene after the Lions’ first bowl game since the postseason ban was lifted.

“I think experiences and games like this has restored the hope,” Franklin said after the game.

It was the perfect momentum boost into the offseason. It gave Penn State fans confidence that the team had finally turned the corner. There were many people who picked the Lions to make a major jump in Year 2 of the Franklin era, many of whom used the Pinstripe Bowl as a reference point.

Unfortunately, that wasn’t the case at all.

All of that offseason momentum PSU had from the Pinstripe Bowl went out the window in the 2015 season opener. Temple was little brother. It had been 74 years since the smaller in-state program knocked off Penn State. Yes, World War II happened during that stretch. To say that it had been a long time since Temple got the better of PSU would be putting it mildly.

But not only did the Owls beat the Lions, they destroyed them. More specifically, they destroyed Hackenberg. Temple’s veteran defense sacked Hackenberg 10 times and completely dominated the second half. As a result of the PSU offense’s inability to stay on the field, the Lions’ defense had nothing left in the tank down the stretch.

With all eyes on PSU — the program some predicted to win 10-plus games — it was a complete debacle. It was a reality check that Franklin did not have the ship steered like many thought he did. It was one thing to lose to a Michigan State or an Ohio State by 17 points, but Temple? That hurt on multiple levels.

“This is huge for recruiting,” Temple coach Matt Rhule said. “I’m getting on the phone tonight and saying, ‘Look at what our kids are doing.’”

That’s a tough one for Franklin to spin. 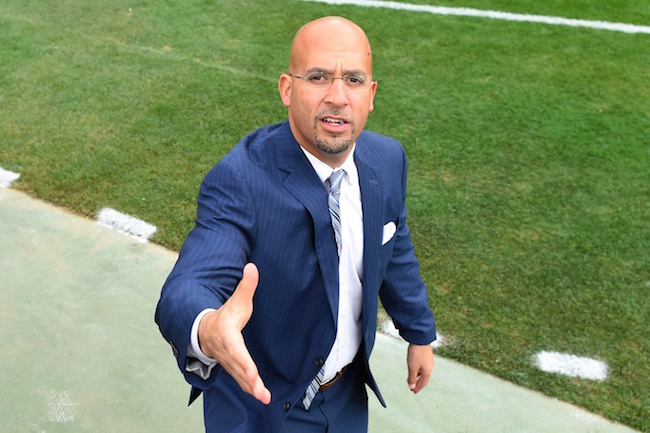 You have to give Franklin credit. With resources behind him, he can recruit. Expectations for Franklin’s abilities as a recruiter were high after he brought top talent to Vanderbilt. So far at Penn State, he’s lived up to those expectations as a recruiter.

His 2015 class finished ranked No. 15 in the country and second in the B1G. Within his first month on the job, Franklin got Saquon Barkley to flip from Rutgers to Penn State. That worked out pretty well so far.

Four-star cornerback John Reid could already be an All-B1G candidate as a sophomore and four-star receiver Juwan Johnson AKA “Megatron Jr.” is expected to break out in Joe Moorhead’s offense.

Besides landing some immediate impact studs, Franklin dominated Pennsylvania. Six of the top seven players in the state picked PSU, all of whom were four-star talents. The best way to rebuild a program is to get local kids believing in the mission.

Franklin’s staff did just that in their first full recruiting cycle. If he gets to stick around long enough to watch it develop, it might not be long before Penn State is competing for B1G East titles again.

What could get him fired — This might be more complicated than any coach in the B1G. Actually, Franklin’s situation might be more dense than any coach in America. There might not be a specific win total that Penn State athletic director Sandy Barbour has in mind. All we know is that she said “improvement is a must” and that B1G and national titles are the goal at Penn State. Well, that’s still pretty vague.

Barbour can’t possibly be putting Franklin in “conference-title-or-bust” territory entering his third season, can she? After all, PSU could have a solid nine-win season and still finish third or fourth in the division. That would be improvement, but what if PSU performs like it did last year against the B1G’s best?

There are a lot of people who are going to put Franklin on preseason lists of coaches on the hot seat. They won’t have a concrete standard for what gets Franklin fired.

Keep in mind that Franklin will only be halfway through his six-year deal, which includes a hefty buyout if Barbour pulls the plug. We know that Barbour didn’t hire Franklin, which means she has no allegiance to him. We don’t what will happen if Franklin pieces together a top-20 recruiting class and wins eight games in the B1G East. 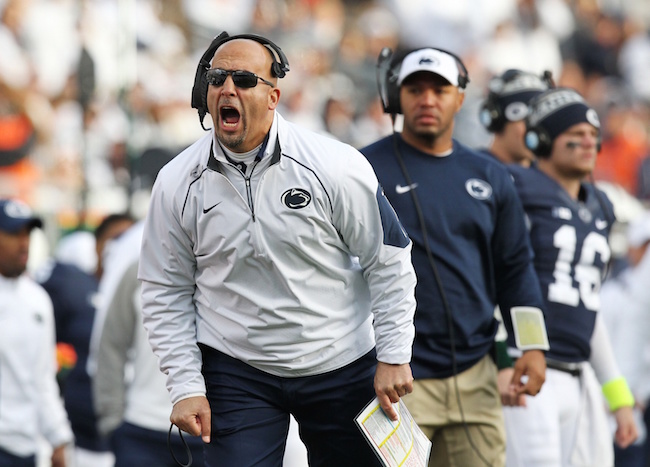 Why he’s at No. 6 — Some might think that No. 6 is too high of a ranking for a guy who has yet to beat a top-25 team at PSU. Actually, if you combine Franklin’s record vs. the top 25 from Vanderbilt, he’s 1-15. Penn State showed no signs of being able to compete against elite competition last year.

For starters, he’s been to five straight bowl games, and he’s won three of them. The only B1G coaches who have done that in their careers are Mark Dantonio, Kirk Ferentz and Urban Meyer. Given the starting circumstances Franklin faced at Vanderbilt and at PSU, that’s an impressive accomplishment.

Yes, Vanderbilt counts. Winning nine games in back-to-back seasons at arguably the worst program in the SEC is an accomplishment Franklin will always have.

The biggest reason, however, that Franklin is at this spot is because of his ability to recruit. He’s coming off back-to-back top 20 classes (247sports). Meyer is the only other B1G coach who is riding such a streak.

But PSU fans aren’t worried about whether or not Franklin’s 2017 group is ranked 13th or 25th. He has to start turning those elite classes into an elite team. To look as poorly as Penn State did against elite competition the past two years was frustrating, but understandable to some extent because of the inexperience.

That time is over. If Franklin is going to remain on this list, he can’t take any steps back. He might have to take a big step forward. We don’t truly know.

But soon enough, we’ll find out.