Ranking coaches in the B1G can be a pretty easy task. It’s easy to place a number beside a guy, failing to give any reasoning behind his placement on a “power rankings,” list.

At Saturday Tradition, though, we don’t want to just give you the rankings. We want to provide you with a detailed description of each head coach and why he’s ranked in his selected spot.

This was a practice that was kicked up from the ground last year and, since there’s still several months until football season gets underway, it’s worth revisiting. So, let’s continue our 2017 #B1GCoachRank:

Where program was when he was hired: Not at the level many thought it was.

Penn State fans and national pundits believed Bill O’Brien would be the guy to lead the revival after the Jerry Sandusky fallout. In many ways, he did, but only for two short years. The Lions weren’t out of the woods yet. Nobody was used to seeing a coach use Penn State as a stepping stone and not treat it as a destination job.

But there was optimism that Franklin, who rebuilt lowly Vanderbilt, could lead the Lions to instant dominance with their resources. That proved to be a longer process than many thought.

And with one blocked kick, Penn State’s fortunes finally changed.

That play, coupled with some relentless pass-rushing down the stretch — that often goes overlooked — fueled Franklin’s biggest win of his career. Sure, it was his first win over a ranked foe at Penn State. The fact that he took down unbeaten Ohio State had all sorts of implications. That win paved the road for the Lions to run the table and earn an improbable B1G East crown.

That night will always be remembered as the revival of Penn State football, and Franklin gets credit for leading that charge.

Frankly, it’s not even close. Penn State-Temple wasn’t even a real rivalry. Why? Because before the 2015 season opener, the Lions hadn’t lost to the Owls since 1941.

It didn’t even up being a down-to-the-wire loss for Penn State. It was a bloodbath. Christian Hackenberg was swallowed whole by the underrated Temple defense, which sacked him 10 times en route to a 27-10 victory.

That loss wiped away all the hype Franklin and the Lions had after seemingly turning the corner in the Pinstripe Bowl win against Boston College. After the Temple drubbing, it was clear that the Lions were still far away from getting back to a championship level.

This is pretty debatable considering that the 2014 class was mostly the work of O’Brien’s staff. But in terms of production produced by one group, the 2014 class was easily Franklin’s best. No, it didn’t include Saquon Barkley, who joined the Lions in 2015, but look at all of the playmakers Franklin kept on board in 2014.

Think about if Franklin didn’t keep some of those guys after O’Brien’s stunning departure. Would the Lions have won the B1G Championship in 2016? Probably not. That group might not have been Franklin’s first full recruiting class, but it was certainly his most important. 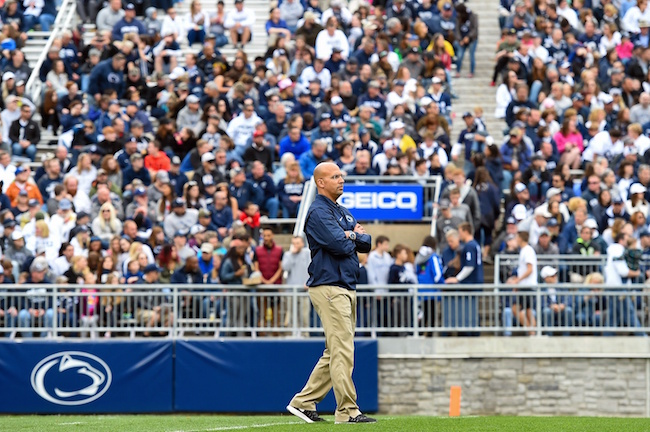 Why he’s at No. 4: At this time last year, we would’ve been crazy to put Franklin at No. 4. Some might think we’re still crazy for moving him up to No. 4. They would say that we’re anointing Franklin after one season.

Well, consider this. First of all, it was an incredible season. To win the B1G instead of three teams that were in the top 10 all year was impressive, to say the least. But it’s more than that.

How many coaches in America took just three years to rebuild two Power Five programs? Franklin’s success at Vanderbilt was unprecedented. That, of course, was why he was hired at Penn State. He had to rebuild, and with limited scholarships and a never-ending threat of possible NCAA sanctions, that wasn’t easy.

After three straight top 20 recruiting classes, Franklin’s 2018 group is ranked No. 3 nationally. Penn State is back to recruiting and playing at an elite level.

Franklin is now one of three current B1G coaches — Urban Meyer and Mark Dantonio are the other two — with a B1G Championship victory on his résumé. Even a disappointing 2017 wouldn’t take that away from Franklin.

He might not have quite the complete résumé of Dantonio or Jim Harbaugh yet, but Franklin is a whole lot closer than he was at this time last year.