Here's how Saquon Barkley can earn a trip to New York

Five months ago, I wrote a story on how Saquon Barkley could become a legitimate Heisman Trophy candidate.

Some people thought that was a little forward. After all, Barkley had one season under his belt. Sure, he was talented as a true freshman, but guys learning new offenses don’t often make that kind of a leap in Year 2.

Barkley did that with flying colors.

With three games left, Penn State realized that their dynamic tailback might have a shot to creep into the conversation. By “shot” we don’t mean that Barkley is going to beat Lamar Jackson and win the award. If anybody does that at this point, it would be a miracle.

The goal for Barkley is just to get to New York. Having a Heisman candidate is a big deal to universities, especially one desperate to remain in the national conversation like Penn State.

Five months later, the question is still one worth asking. How does Barkley become a legitimate Heisman candidate? 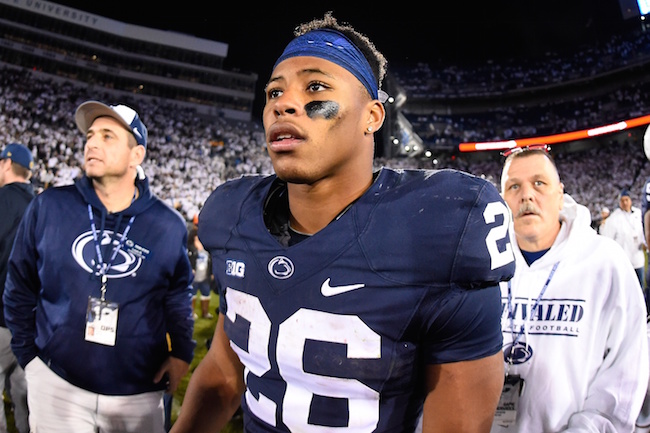 There’s definitely a path to get to New York. Fox Sports’ Stewart Mandel put Barkley at No. 5 in his Heisman watch this week. In many ways, the path is similar to the one we mapped out five months ago, albeit with a smaller time frame to accomplish it in.

That’s the good news. Barkley has set himself up to where if he goes off in three games against three bottom-feeder B1G teams, he’ll at least have a chance.

As was the case five months ago, Barkley has to deliver a few more viral runs down the stretch. Whether that’s the 57-yard touchdown run like he had against Iowa or something like what he did against Maryland, style points matter:

Nobody was talking about Jackson as the Heisman favorite until he became a human video game against Syracuse during that Friday night game in September. In an era when fans can watch a million games on TV, Barkley has to do things that Heisman voter in Idaho can see blowing up his Twitter feed.

The good news for Barkley is those opportunities could be plentiful. None of the three run defenses he faces to end the season are what you’d call “stout.”

None of these games are going to draw in a national audience. If Barkley simply puts together three solid games without any highlight-reel plays, he’ll get lost in the shuffle in a busy day of college football.

Barkley has a knack for making those kind of plays within the flow of the game. Much like Adrian Peterson, he might have a couple series without a carry longer than four yards, and suddenly he rips off a 70-yard score.

The more of those plays, obviously, the better.

-What kind of numbers will it take?

There isn’t a specific number of yards that it’ll take for Barkley to get an invite. Shoot, Christian McCaffrey set the all-purpose yardage record and still didn’t win the Heisman Trophy. Why? He wasn’t viewed as the best pure running back.

Fair or not, Derrick Henry won the rushing title and won the award. Barkley isn’t going to erase a 500-yard deficit and beat out San Diego State’s Donnel Pumphrey for the rushing title. The chances of Barkley besting Texas’ D’Onta Foreman for the Power Five rushing title aren’t promising, either.

But here’s the good news.

A running back non-Power Five team that isn’t competing for a national title likely won’t get a New York invite. Sorry, Pumphrey. A running back on a non-top 25 team isn’t getting to New York unless he wins the rushing title in a landslide like Andre Williams did in 2013. Unless Foreman continues his torrid recent pace (averaged 296 rushing yards in last two games) that isn’t happening.

There are two Power Five backs on top-25 teams ahead of Barkley. Here’s how he stacks up against them:

Barkley has been on fire the last four weeks. But even that was only an average of 169 rushing yards and one rushing touchdown per game. He could certainly help himself in the pass-catching department, which he looks vastly improved in. Keeping up his four-game pace of 197 yards from scrimmage would certainly help. 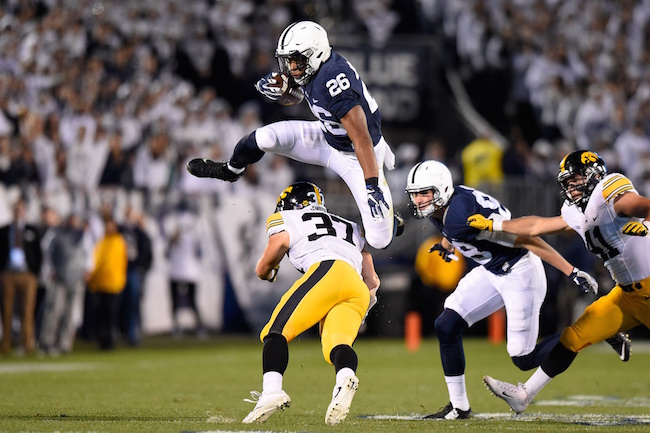 This is the obvious one. There’s no scenario in which Penn State loses a regular season game and Barkley gets a Heisman bid. None. Is that fair? Maybe not, but the margin for error this time of year is beyond slim.

In the beginning of the season, this looked like Barkley’s biggest hurdle — he likes those — to overcome to get to New York. The Lions looked like a lock for another 7-8 win season, which wouldn’t have allowed Barkley to even enter the conversation.

But Penn State is arguably the surprise of the year in college football. Being the star of a top-10 team is a major feather in Barkley’s cap, especially if the Lions continue to roll down the stretch.

There’s even still a chance that Penn State makes it to the B1G Championship game. Many Heisman voters cast their ballots in between the regular-season finale and the conference title games. Just getting to Indianapolis would be a major boost for Barkley’s odds, especially if he’s the driving force.

The longer PSU remains in the top 10, the more people are going to talk about Barkley.

-Other things that would help Barkley

Barkley isn’t even worried about what he can do to win the Heisman, much less what others can do to help his case. But we can still talk about it.

Here are some non-Lamar Jackson things that would allow Barkley to rise, assuming he accomplishes everything else previously mentioned:

Will any of those happen? Who knows. The chances of Barkley getting an invite to New York aren’t great, but neither were the chances for him to still be in the hunt this late.

In all likelihood, Barkley’s monster second-half is just setting the stage for his hyped 2017 season. He’ll likely be a preseason All-American, appear on every draft board and PSU will be a preseason top-25 team.

That’s not a bad consolation prize.