Can Penn State become the new Michigan State? It's not that crazy

Not that long ago, there were two safe bets.

One was that Mark Dantonio was going to be a thorn in Michigan and Ohio State’s side and threaten for the B1G East title. The other was that James Franklin was going to lead Penn State to nowhere but another middle-of-the-pack finish.

Things can change quickly in college football. Narratives were tossed in the trash, or buried like Penn State’s game film from the 2015 season opener.

The Lions are now the team threatening to create College Football Playoff madness. A win against the Spartans — and an Ohio State win — will create a once-unrealistic scenario. Penn State, of all teams, would advance to the B1G Championship instead of Michigan and Ohio State.

Dantonio was supposed to be the only one capable of breaking down two of college football’s best coaches. But now, that duty could belong to Franklin.

Even if Michigan wins and advances to the B1G Championship, Penn State can set an important precedent moving forward. The Lions — not the chip-on-the-shoulder Spartans — are the new biggest threat to Michigan and Ohio State’s dominance. 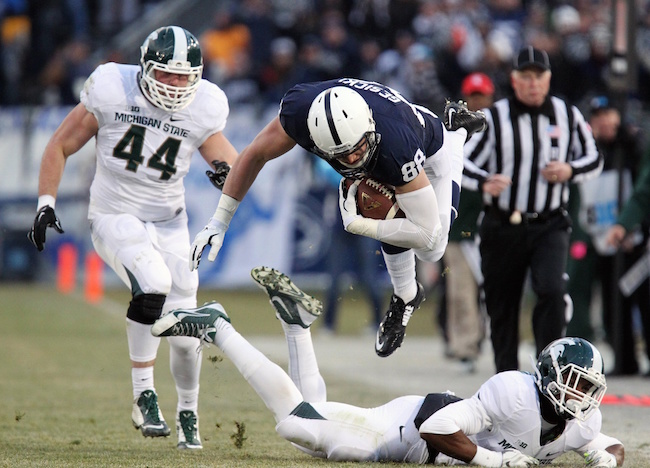 When Penn State knocked off Ohio State, it was arguably the biggest top-five upset of the year to that point. Part of that was the fashion that it happened in. But sometimes you need a flukey special teams play to take down a powerhouse.

Everyone said after that game that Ohio State still controlled its own playoff destiny and that the Lions could have a nice season, but they wouldn’t be in the playoff conversation. Well, neither of those were true.

OSU didn’t control its own destiny then and it doesn’t now. It has Iowa to thank for that. It also has a young, confident Penn State team to thank.

The Lions have obviously been a different team since that magical fourth quarter against OSU. Call it a turning point if you want, but the second-youngest team in college football figured it out at the right time.

When the Spartans upset OSU in the 2013 B1G Championship, they arrived. They won the Rose Bowl, went 23-4 in the next two seasons and finished with back-to-back top six finishes. That wasn’t much worse than the two-year run OSU went on with far more talent.

There’s obviously no guarantee that Penn State handles success like MSU did. Mark Dantonio won big game after big game. To this point, Franklin has one to his credit. Many aren’t convinced the Lions are truly a top-10 team. 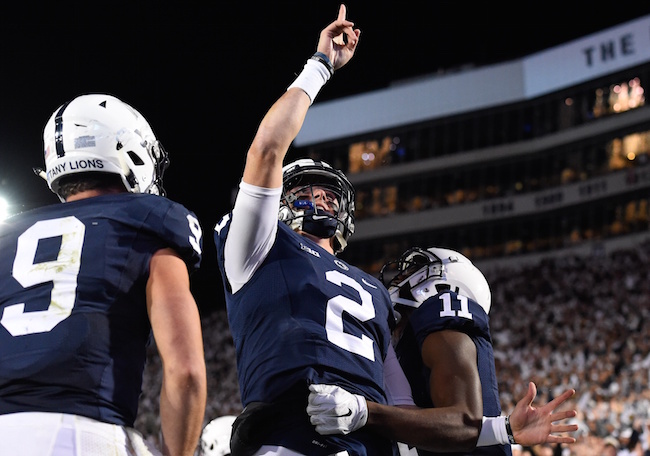 As mentioned above, the Lions are about as young as can be. Basically all of their skill players are back next year, including a guy who will earn preseason All-America hype. They’ll get healthier on the offensive line and talented recruits will compete for starting jobs.

Speaking of recruits, Franklin had back-to-back top-20 classes in 2015 and 2016 that should play bigger roles next year. Without any lingering job concerns and with the Jerry Sandusky-related sanctions in the rearview mirror, Franklin should recruit better than he ever has.

Add in the fact that Penn State is having its best post-Joe Paterno season, and don’t be surprised if Franklin lands a top-10 class.

The resources were always there for Franklin to get and keep Penn State in the national conversation. He still has one of the better in-state talent pools and he has a nationally-recognized brand that’s finally being talked about for the right reasons.

Shoot, that was more than MSU had to work with. Dantonio got MSU where it was despite the fact that he basically got Urban Meyer’s leftovers.

There are no guarantees that PSU becomes a yearly lock for 10 wins. But while some are wondering if PSU is just some fluky team, it’s important to remember that the Lions were supposed to be a year away from really making a push. They turned things around quicker than anyone could’ve imagined.

On Saturday, Penn State can do something that it hasn’t done since 2009 — beat Michigan State. That was also the last time the Lions finished in the top 10. If they can do that on Saturday, it could clinch something that once seemed far more improbable — a B1G East crown.

It wasn’t long ago that the college football world was betting on the Lions to come up well-short of their division foes. Franklin’s program could be a force to be reckoned with for the foreseeable future.

Believe it or not, that looks like a pretty safe bet.