At this time last year, Iowa was the surprise of the college football world.

The undefeated Hawkeyes were led by their fearless first-year starter, C.J. Beathard, the guy who played with reckless abandon. He’d dive into the end zone at the risk of exposing his already-banged up body. He could improvise out of the pocket and make plays with his legs on third down. Even with that roll-the-dice mindset, his turnovers were few and far between. Most importantly, he won. Many of those victories were the result of a clutch play late.

Beathard, because of several key offensive injuries and injuries of his own, hasn’t looked like that quarterback in 2016. Beathard’s counterpart on Saturday, Trace McSorley, looks like 2015 Beathard. Everything described in the previous paragraph could be applied to Penn State’s first-year starter.

The Lions are this year’s surprise team in the B1G, and McSorley is looking like the breakout star Penn State hoped he would become. That was Iowa and Beathard last year. When you take a closer look at the two quarterbacks, it’s hard not to notice the similarities. 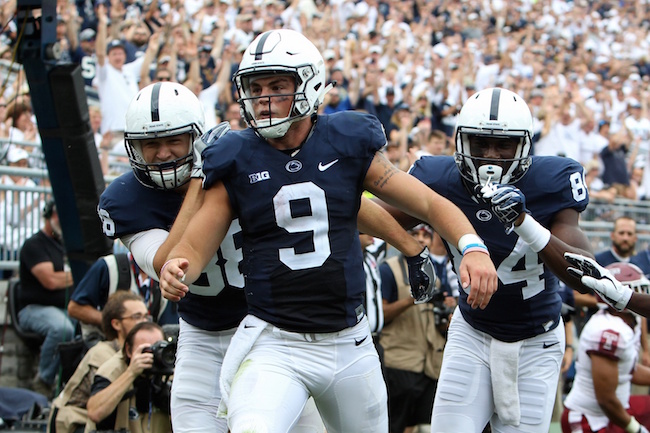 Let’s be clear. Beathard and McSorley were both blessed with dominant backfields. Iowa’s three-running back system was the backbone of last year’s 12-0 regular season while Saquon Barkley is a human highlight reel. Neither quarterbacks are able to operate the way they do without those elements.

And systematically, Joe Moorhead’s offense is obviously much different than Iowa’s. Pre-snap, they’re night and day. Nobody will argue that: 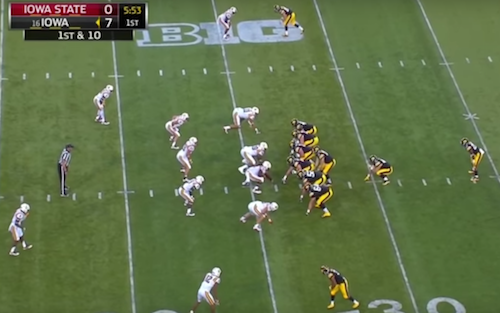 Call it a little new school vs. old school if you want. And sure, McSorley makes zone reads out of the shotgun while Beathard’s misdirection is a play-action out of an I-formation or a single-back set. It’s what they do after that that draws the comparison.

When they throw, both are first-read guys. That is, if their first read isn’t open, their instinct isn’t necessarily to slide up in the pocket and scan the field, at least when healthy. Both like to roll out and force the defense to make a decision.

Beathard thrived in those spots last year in part because his mobility was there, at least in the first couple months. This year, he’s been without go-to target Matt VandeBerg. He also doesn’t have anyone who can stretch the field on a play-action like Tevaun Smith could. Couple that with the fact that his mobility has been limited, to say the least, and it’s no wonder his improvising skills don’t look like what they were last year.

McSorley, on the other hand, can still use his legs to get out of trouble. That’s an element that Penn State didn’t have with Christian Hackenberg. The Lions can put pressure on an entire defense to either hold coverage or track down McSorley. Like Beathard, McSorley isn’t the world’s most-accurate passer. But he can still take advantage of a breakdown in coverage outside of the pocket.

That’s part of the reason why McSorley has been so productive. Through eight games, look at how similar his numbers are to 2015 Beathard:

Beyond numbers, McSorley has the unteachable ability to stay poised in tough situations.

When he came in for an injured Hackenberg in the Taxslayer Bowl last year, McSorley nearly led PSU all the way back after falling behind three touchdowns to Georgia. He led another near-miraculous comeback after the Lions were down three touchdowns against Pitt. Against Minnesota, McSorley turned a double-digit halftime deficit into an overtime victory.

It’s moxie. It’s the same quality we saw in Beathard last year when the Hawkeyes found themselves in tight spots with their undefeated season on the line. He always stayed in control and put his team in position to win. Even when he had a rough day, he could still make the throw of his life in a crucial moment:

That’s why Beathard earned second-team All-B1G honors instead of Indiana’s Nate Sudfeld, who was far more productive from a statistical perspective.

McSorley is similar in that regard. Even when he had his worst statistical game of the season vs. Ohio State (8-of-23, 154 yards), it was McSorley who engineered and finished the touchdown drive that started PSU’s fourth-quarter comeback. Moments like that certainly put him in the All-B1G discussion.

It’s interesting because this week, neither McSorley nor Beathard will be at the top of the scouting report. Iowa will be focused on shutting down Barkley, who hit the 200-yard mark twice in the last three weeks. Penn State will also likely load the box and force one of Beathard’s inconsistent receivers get some separation.

Beathard is a perfect 8-0 on the road, and McSorley is a perfect 5-0 at home. The Lions are feasting off the same “nobody believed in us” juice that fueled Iowa last year.

Inevitably, this game could come down to one of them making a big play late. It might not be what’s drawn up, and it might not make an NFL draft tape. But both have come up clutch before, and in the process, saved their head coaches from the hot seat.

Fortunately for them, Beathard and McSorley don’t seem to mind when their seat gets a little hot.