For the last 48 hours, the main topic of discussion surrounding Penn State was its College Football Playoff snub.

Some felt that the Lions, as champions of the best conference in college football, deserved to play for a national title. Those opinions surfaced after the Lions rallied against that stout Wisconsin defense and pulled off a 21-point comeback in Indianapolis.

But there was a different snub in regards to Penn State that didn’t get nearly as much attention. On Monday night, five Heisman Trophy finalists were announced:

As you can tell, Trace McSorley wasn’t one of them. Instead, three different quarterbacks earned a trip to New York. All of those candidates deserved to be on that list.

McSorley just should’ve been right there with them. 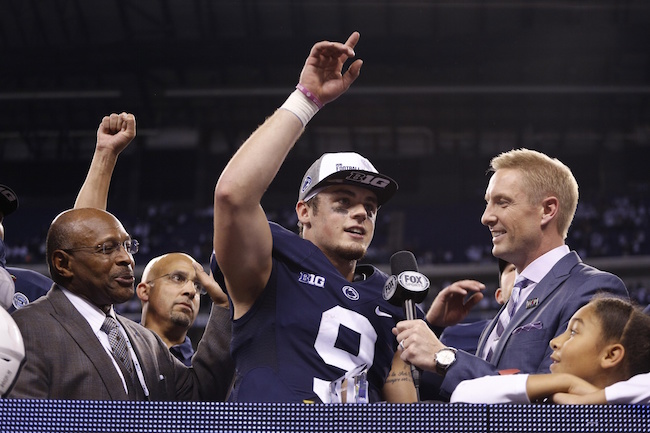 You might think that’s crazy. After all, McSorley was the redshirt sophomore with zero career starts entering the 2016 season. He doesn’t have the best arm, he isn’t the fastest and he doesn’t have the prototypical quarterback build. Shoot, the guy wasn’t even a first-team All-B1G selection.

All-conference selections were voted on before the B1G Championship. If those votes were made after Saturday night in Indianapolis, you can bet several people would’ve put McSorley ahead of J.T. Barrett.

RELATED: What Penn State just did was nothing short of incredible

Barrett is a household name because, as Urban Meyer says, he’s a winner. He doesn’t always light up the stat sheet and he might not have video game numbers, but Barrett’s ability to make the right decisions down the stretch was why he was a candidate in the first place.

McSorley has all of those characteristics, and he has the numbers to back it up. Instead of comparing McSorley to Barrett, who didn’t get a Heisman invite, let’s compare him to the rest of the field.

Believe it or not, it’s a better comparison than you’d think:

McSorley did his damage late. Whether it was late in games or late in the season, he was always at his best down the stretch. If the previous numbers didn’t sell you on McSorley, look at what he did from the start of October on compared to the other candidates:

Again, that last metric is important. Contrary to what the other three candidates did, McSorley lit up quality defenses. He wasn’t facing weak Big 12 defenses like Mayfield did. His best game didn’t come against South Carolina like Watson’s did. He didn’t go viral for dominating Syracuse like Jackson did.

McSorley went viral for what he did in a conference championship game on a neutral field against Wisconsin. You know, the top-five defense that allowed more than 21 points once ALL YEAR. All McSorley did was erase a 21-point deficit and dominate the Badgers in a way that LSU, Michigan and Ohio State couldn’t. 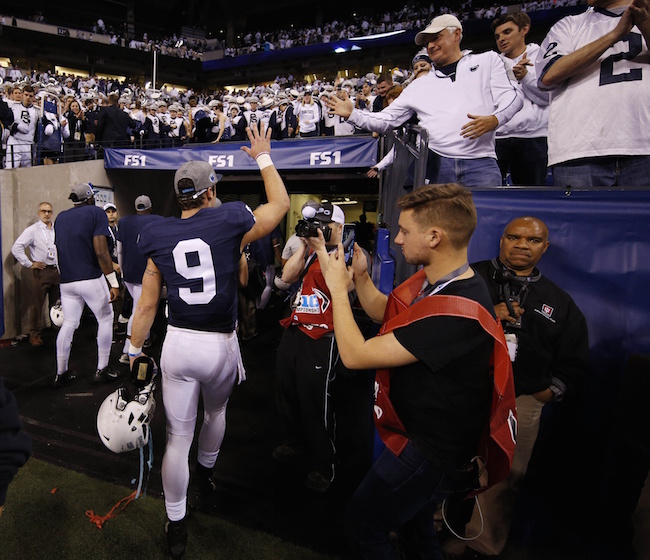 And remember Iowa? McSorley lit up the nation’s 10th-ranked scoring defense for 280 total yards and three touchdowns in essentially three quarters. He didn’t have to play for most of the fourth quarter because the Lions were up four scores.

That, above anything else, was why McSorley should’ve at least been in the Heisman conversation. All he did was win. All he ever does is win. He led his high school team to four state championship games and won three of them.

In his first and only season as the Lions’ starter, he helped lead the second-youngest team in the country to a Rose Bowl. He did it with a banged-up offensive line with a first-year coordinator in a brand-new offense. McSorley’s Lions outlasted Michigan and Ohio State to win what was easily the toughest division in college football.

He saved his best for last in Indianapolis on Saturday. Those who saw it couldn’t believe it.

Granted, McSorley will be the first to tell you that his receivers made phenomenal adjustments on deep balls. But he was the one who bought time and put his trust in his teammates to make plays. Isn’t that what the quarterback position is all about?

Even if McSorley had earned a last-minute invite to New York, he wouldn’t have sniffed the votes that Jackson will get, and understandably so. Too many people spent the whole season wondering if Penn State was legit for that to happen. The fact that Saquon Barkley had an October run of his own probably took attention away from McSorley’s efforts, too.

At the very least, McSorley’s finish should’ve allowed him to become a household name — you have to be that in order to be a Heisman candidate at quarterback — heading into 2017. If his final two months were any indication, McSorley will have two more cracks at college football’s most-coveted award.