Urban Meyer admitted something that many college football fans were guilty of last year.

When Penn State came into Columbus last October, the Buckeyes didn’t really know who Saquon Barkley was. The true freshman wasn’t listed as the team’s starter and even though he ripped off back-to-back 100-yard games earlier in the season, he missed the previous two weeks with an injury.

OSU defensive coordinator Luke Fickell told Meyer that “you could have everything locked down and it wouldn’t matter… (Barkley)’s one of those guys like a J.T. Barrett where he just makes plays.”

Barkley made OSU change the way it feels about the PSU offense. In addition to having a game-changing tailback, the Lions’ up-tempo offense will also present a new challenge. No longer can the Buckeyes simply pin their ears back and rush a pocket passer:

PSU’s offense looks far different with Barkley and Trace McSorley leading the way. And given the way that the Lions have been rolling offensively as of late — 33.5 points per game in their last two contests — it’s a question worth asking.

Does Penn State pose a legitimate threat to OSU’s defense?

Despite a 19.5-point spread, the Buckeyes do have some concerns about shutting down this PSU offense. OSU is coming off its worst effort against the run all year. The unit that didn’t allow a rushing score in its first five games surrendered 236 yards on the ground at Wisconsin.

PSU might not have the offensive line that Wisconsin does, but as Fickell said, Barkley is plenty capable of finding holes when a play is broken down.

If this doesn’t convince you of that, I don’t know what will:

Meyer called Barkley one of the three best backs in the country. In other words, he thinks he’s in a class with Christian McCaffrey, Dalvin Cook and Leonard Fournette. With all due respect to Samaje Perine and Corey Clement, Barkley is the best back the Buckeyes have seen all year.

You’ll see a whole lot more eight-men-in-the-box looks against Barkley this year than last. That much you can all but guarantee. OSU likes its chances with one-on-one matchups on the outside and is willing to trust its secondary.

RELATED: Maryland hadn’t seen anyone like Saquon Barkley, and it showed

What we don’t know is how OSU will handle McSorley. Sure, he finds a lot of different underneath targets with the up-tempo offense, but he’s a different matchup than Indiana’s Richard Lagow. McSorley is more mobile and more accurate.

In PSU’s two B1G wins, McSorley looked like a different quarterback than he was against Michigan. Why? Well, it’s a lot easier to function without constant pressure. Michigan sacked McSorley six times and hurried him four other times. Don Brown’s defense did it with blitzing linebackers and with basic four-man fronts.

Minnesota didn’t sack McSorley and Maryland got to him three times, but he got plenty of clean pockets to step into: 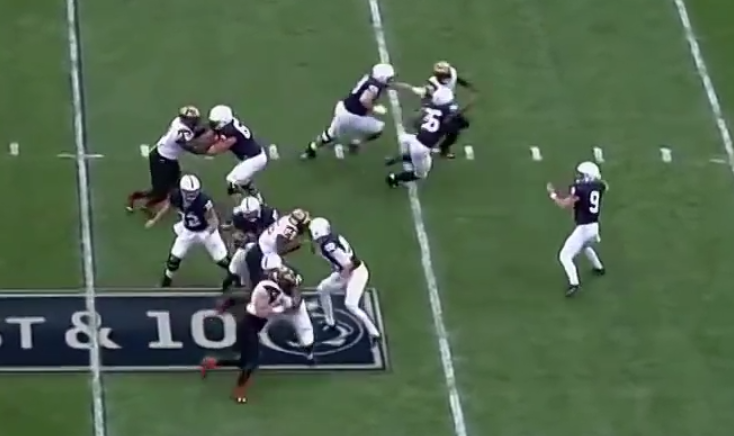 McSorley can make OSU pay if he gets time to throw. If OSU is able to confuse him and rush keep contain, the up-tempo offense will be as useless as it was against Michigan.

The goal for Penn State is still the same, even against the speedy Buckeye defenders. Spread the field horizontally and keep them on their heels.

Moorhead will likely try and draw up something similar to what Wisconsin did with Jazz Peavy. The Buckeyes didn’t have anyone that could contain the edge and they were gashed all first half by a simple jet sweep. Eventually they adjusted, but the Lions could still take a page out of Wisconsin’s playbook.

RELATED: OSU’s adjustments vs. Wisconsin keep playoff fate in their own hands

We saw how well Paul Chryst handled the bye week to prepare for OSU. His first-half game plan was executed to near perfection against one of the stingiest defenses in the country.

How well did PSU handle its two weeks to prepare for OSU? Will the Lions be able to use their offensive weapons in space? Or will the pressure fall on Barkley to have the game of his life? Keep in mind that Barkley’s monster game vs. OSU last year came in a 28-point loss. You don’t take down a team of OSU’s caliber by having a one-dimensional offense.

Franklin came to PSU as an up-and-coming offensive guru. Sure, the Lions offense is now built around Moorhead’s principles and in their last two games, they clicked on all cylinders.

But since Franklin took over at PSU, the Lions averaged 14 points against the likes of Michigan, Michigan State and Ohio State. In fact, the Lions never eclipsed more than 17 points in regulation in any of those seven contests.

Does Penn State finally have the formula to crack the code?