Playoff or not, what Penn State just did was nothing short of incredible

When T.J. Watt plowed through Saquon Barkley and lit up McSorley to force a fumble on a fourth-and-one, it was a familiar circumstance for Penn State. The Lions were smacked by Michigan in September and left for dead. A 2-2 team in the B1G East was supposed to be done.

On Saturday night, Penn State was supposed to be done. It looked like the B1G Championship game finally knocked the Lions back to earth and out of the College Football Playoff picture. With the first half winding down, the Lions were down 21 points to a Wisconsin defense that allowed that many points once all season.

Bro, you still good? You in this?

“He gave me a head nod,” Blacknall said. “That was the end of the story right there.”

Well, it was actually just the beginning of it.

McSorley didn’t come out of the game. The kid that was always butting his head into walls wasn’t coming out of the B1G Championship. Not with a potential conference title on the line. Injuries? Lockdown defense? Twenty-one point deficit?

By coming back from down 21 points against Wisconsin and winning the B1G Championship, McSorley completed a run that few people can put into words.

“Unbelievable,” Blacknall said of McSorley. “The fact that he was just able to lead us in our lowest moment and just keep preaching to us on the sideline that everything was gonna be OK, no matter how big the gap was…he just kept giving us confidence and saying, ‘We’re gonna be alright. We’re gonna be alright.’” 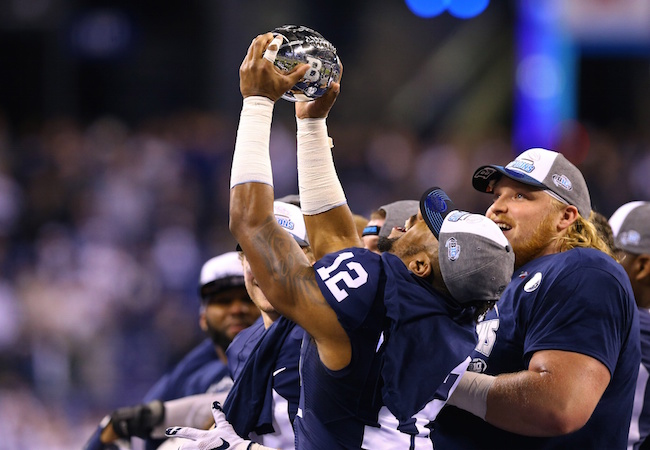 Penn State didn’t want to discuss the College Football Playoff on Saturday night. Instead, the Lions finally got to look back and appreciate the body of work they put together.

“What I do know is that we just won the toughest conference in college football…We’ve won nine straight,” Franklin said. “They say you are allowed to overcome minor setbacks and we’ve done that. It’s up to you committee.”

Everything Franklin said is true. Regardless of what the committee does with Penn State, that should never be forgotten. Players didn’t want to talk about whether or not the felt they were one of the best four teams in the country.

Penn State deserved to enjoy Saturday night for what it was. If there were some who felt the Lions got lucky with a fluke play against Ohio State, Saturday night should’ve turned them into believers.

Somewhere between the touchdown pass to Mike Gesicki or the bomb to Saeed Blacknall, the world should’ve probably taken note of what Penn State was doing. That was a Wisconsin defense that allowed eight passing touchdowns ALL SEASON before Saturday night. That was third in FBS.

What did the Lions do? They turned it into backyard football. That’s something that neither Michigan nor Ohio State could do against the Badgers. McSorley got into an unprecedented rhythm. It looked like he was playing “500” with his receivers.

“It did feel like that,” McSorley said. “It felt like even if they were covered, I felt like I could throw it up and make a catch.”

Wisconsin players admitted that Penn State figured out their complex defense. The numbers don’t lie. McSorley finished with 384 passing yards — a B1G Championship record — against a defense that hadn’t allowed more than 267 all season.

If that’s not a statement to the selection committee, what is?

And while McSorley was the driving force behind the comeback, that wouldn’t have been possible without a lights out defensive performance in the second half. Penn State didn’t allow a touchdown in the second half. Linebacker Jason Cabinda said after that after the Badgers missed a field goal on the first drive of the second half, they said “no more.”

It’s one thing to say that, it’s another to embody that.

To say that PSU is a second-half team would be putting it lightly. They outscored their last three opponents of the season 99-3. 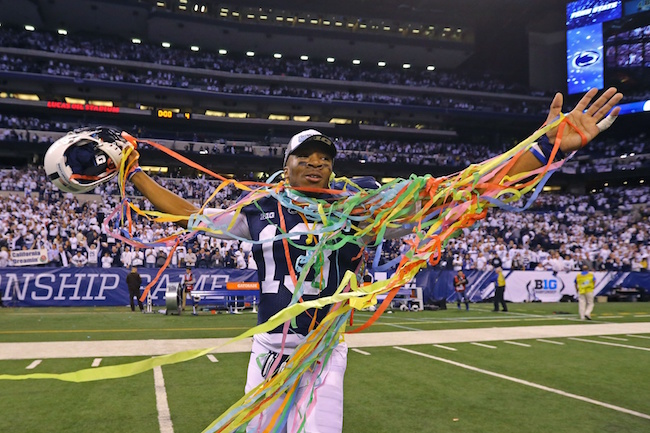 Michigan was the turning point. Nine in a row is proof of that. Saturday night was all about looking back at the road Penn State took to get to a B1G Championship.

How long ago did the Michigan game feel?

“My goodness,” PSU defensive lineman Garrett Sickels said. “I don’t even think about (the Michigan game), to be honest.”

If the Lions have it their way, the selection committee won’t, either. But even if they don’t, they’re likely ticketed for at least a Rose Bowl. That’s about the best consolation prize one could ask for.

On Saturday night, it finally started to hit home how special this season was.

“We definitely needed the stars to align to be here,” McSorley said. “For this team to start out where we were with a lot of people writing us off — maybe we get eight wins, maybe nine if we upset someone and get a little lucky — and for us to be sitting here now at 11-2 as B1G champions…it’s an amazing feeling to be able to prove some people wrong for this team.”

Twelve people in a room won’t define Penn State’s season. One 39-point loss at Michigan didn’t define it, either.