After OSU win, Penn State would be wise not to overlook wild card Purdue

Saquon Barkley admitted the reality of Penn State’s preparation for Purdue on Saturday.

The Lions are trying to create “their own juice.”

That’s what happens when a team goes from taking down No. 2 Ohio State in front of 107,000 people to playing against lowly Purdue in front of 30,000 people. It’s a sleepy, noon kickoff on a grass field against a team that isn’t playing for anything more than pride.

It wouldn’t surprise anyone if the Lions came out sluggish on Saturday. After all, this is a team that’s been outscored 48-34 in the first quarter this year. That number drops to 28-7 in PSU’s two road games, both of which were losses.

Penn State does need to create its own juice on Saturday. If the Lions lack that, Purdue — yes, Purdue — can take away all the juice they had coming into West Lafayette. 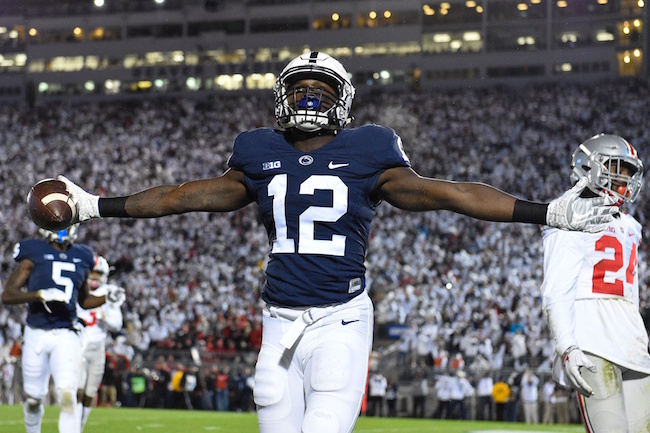 Penn State players, fans and coaches had every right to enjoy Saturday night’s win against Ohio State. Lord knows those moments have been few and far between in the post-Joe Paterno era.

But momentum doesn’t win college football games. If that was the case, OSU would’ve rolled into State College and trucked the Lions.

Purdue went into Lincoln last Saturday seemingly as a program in shambles. But in their first game without Darrell Hazell, the Boilers came out firing against No. 6 Nebraska (except for the opening drive). And while Purdue’s offense was held in check after it scored 14 points in the first 20 minutes, it was still an impressive effort against a quality opponent.

The Boilers ran a few misdirection plays and shook up the playbook. They did things under Gerad Parker that they didn’t do with Hazell. Why? Purdue had nothing to lose.

Count on the same approach on Saturday. Purdue will stretch the field vertically, run jet sweeps and maybe sneak in a halfback pass. If the Lions are slow to react to what figures to be a diverse offensive game plan, PSU could easily find itself in a two-touchdown hole.

RELATED: James Franklin had a crazy postgame after taking down Ohio State

James Franklin said he had 180 recruits on hand on Saturday for the Ohio State game. The LAST thing he wants is for his team to be the punchline of tweets from the college football world. You can picture them now.

“Someone should tell Penn State that Purdue isn’t Ohio State.”

Obviously those comments don’t make an impact on a game, but they do change perspective. Right now, Penn State’s perspective is as good as its been in the post-Paterno era. Being ranked for the first time in 2011 is a sign of legitimate progress. Having people talk about Penn State potentially being in a three-way tie with Michigan and Ohio State is huge.

Everyone is patting Penn State on the back while also wondering if it turned the corner. It sure looked like it on Saturday night. Brandon Bell was all over the field, Garrett Sickels played like 2015 Carl Nassib and the Lions had a “never say die” attitude that we haven’t seen from them against a quality opponent.

Purdue isn’t a quality opponent, but it is a capable opponent. Any team that throws for as many yards as the Boilermakers — they’re first in the B1G with 303 passing yards per contest — can put up points in a hurry. With Parker running the show, there figures to be an even greater emphasis on the passing game.

Nobody will pick Purdue to upset Penn State on Saturday. The Lions are 14-point favorites for a reason. You’ll hear talk about it being a sleeper game because, well, it is. Coming down from the high that was Ohio State isn’t easy. As Barkley said, preparing for a game at Purdue is a totally different ballgame.

But if Penn State treats it any less important than last week, it’ll be back to square one.