For the next two weeks, we’ll be taking a look at where each B1G team needs to improve and answering pressing questions this offseason. For some it’s establishing depth, and for others, it’s learning a new system. Whatever it is, each team has at least five things to take care of before 2016 kicks off.

Penn State’s offensive transition has been well-documented. The new up-tempo spread offense will look significantly different than what Penn State fans are use to. Everyone will have a new set of responsibilities that will require ample preparation. The summer is obviously the time to get that squared away.

It’s supposed to be an easier one for the offensive line to learn. With more veterans up front, there should be fewer missed assignments, too. That will determine whether or not the offense is able to take a step up with its new identity.

RELATED: Five things Saquon Barkley can do to become a legitimate Heisman candidate

I’ll be interested to see how Penn State’s established veterans take to it. Saquon Barkley is the expected beneficiary of the new system, but Chris Godwin and DaeSean Hamilton could also have an uptick in production if they’re able to catch the ball in space like Moorhead is planning on.

Teams go through offensive adjustments all the time, but this one is significant. If Penn State is prepared for September, it has the skill players to take this group to levels it hasn’t reached in the post-Joe Paterno era.

-Figure out offensive line and stick with it

Matt Limegrover came to Penn State knowing that the offensive line needed major help. Even with a more mobile quarterback in place, the Lion front still has major strides to make if it wants to compete with the B1G East’s best.

Part of that involves figuring out who needs to play where, which has been an issue the past couple years. Limegrover moved guard Brian Gaia inside to center to replace Angelo Mangiro. Andrew Nelson will move from right to left tackle. But other than that, there are battles galore up front.

Redshirt freshmen Ryan Bates and Steven Gonzalez are battling for the left guard job while junior Brendan Mahon and senior Derek Dowrey are competing for the right guard job. James Franklin praised Bates and Dowrey in camp, so both could have the leg up heading into summer.

Then there’s the former highly touted JUCO transfer Paris Palmer, who was moved to the right tackle position after an inconsistent first season. He’s battling with Noah Beh for that spot.

With a first-year coordinator in a new offense, Penn State would be wise to settle these positions early. Injuries happen and guys have to move around up front, but this group needs to establish some stability this summer. 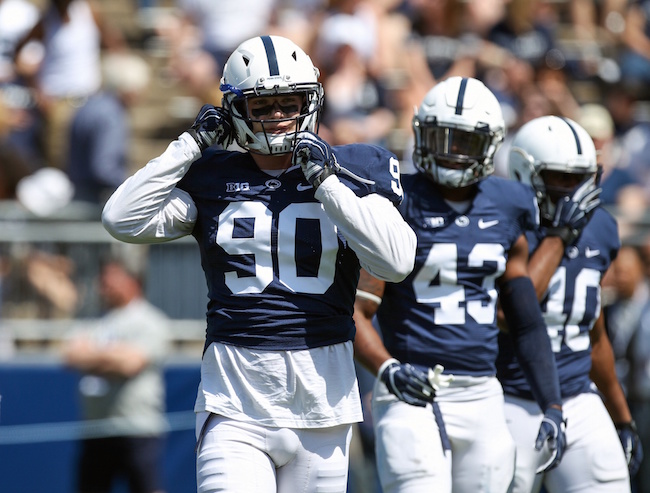 -Get defensive line up to speed

The turnover on the defensive line might scare some, but the Lions did have plenty of guys step up this spring.

Kevin Givens epitomized that. The freakish redshirt freshman starred in the spring game and showed that he’s worthy of one of the vacant defensive tackle spots. He’s still raw, so his summer preparation is more mental.

What’s less clear is who will play alongside him. It’s been a while since the Lions have had to seek help at the position solidified by Anthony Zettel and Austin Johnson. Replacing them could be Givens along with either Curtis Cothran, Parker Cothren, Antoine White or Robert Windsor. Maybe Penn State fills the spot by committee.

It also remains to be see what Penn State will do at defensive end. Lone returning DL starter Garrett Sickels will start at one of the end spots while Evan Schwan and Torrence Brown will battle for the other. Perhaps Schwan is the two-down guy and Brown is the pass-rush specialist. That could work itself out during camp.

This unit had a lot of pressure put on it last year, and it showed when the offense couldn’t stay on the field. The Lions defensive line was one of the best in the country, but too often they were put in tough spots. This year’s group likely won’t record some of the numbers that group did (sixth in FBS in tackles for loss), but it could be put in better positions to succeed, which would allow it to hide some of its inexperience.

Linebacker U has no shortage of talent in the middle of the defense. Brandon Bell, Nyeem Wartman-White and Jason Cabinda are one of the top starting units in the B1G. The issue for new defensive coordinator Brent Pry is figuring out what to do beyond those three.

Penn State’s depth at the position took a major hit when Wartman-White went down with a season injury and Bell struggled to stay healthy. The biggest blessing was that Cabinda stepped up without Wartman-White and established himself as one of the team’s most reliable tackler.

What would happen if PSU suffered a key loss at one of those spots?

RELATED: Jim Delany started TV revolution before and he’s not afraid to do it again

Manny Bowen was thrown into the fire as a true freshman last year. The former four-star recruit is talented, but some might worry about a significant drop-off if he were to replace Bell or Wartman-White. The same question exists for Jake Cooper, who also played as a true freshman last year because of depth issues. Between he, Bowen and senior Von Walker, depth is still something Pry has to figure out.

Penn State could slide a few of its bigger safeties to linebacker in a pinch, though that’s obviously not an ideal midseason move.

Then there’s the issue of figuring out what to do about the battle between Wartman-White and Cabinda at middle linebacker. Both will start — the loser of the battle will start at outside linebacker — but does Pry go with the budding talent in Cabinda, or does he put Wartman-White back at his natural position?

Either way, Pry has his work cut out for him this summer. 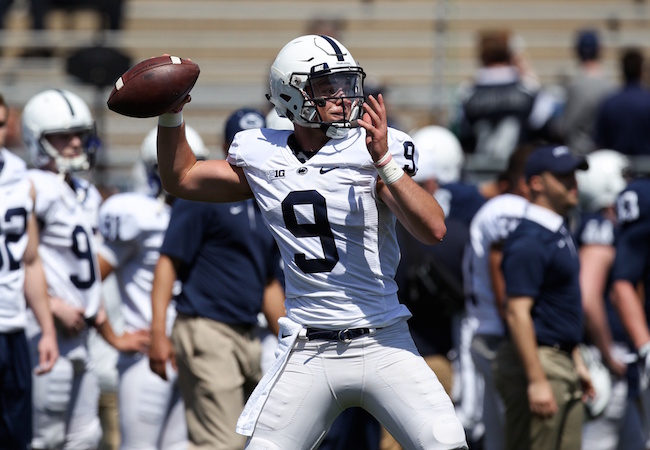 –Go all in with Trace McSorley

Ok, I get that it’s still a battle. McSorley and Tommy Stevens are both still vying for the quarterback job, but I’ve seen enough. What McSorley did to rally the Lions late in the TaxSlayer Bowl and the precision he showed in the spring game was enough. If he’s the guy, he needs to get as many reps with the No. 1s as possible.

Competition is a good thing, if there is one. McSorley looks the part, and he looks like a guy who could add a new element to the offense. James Franklin doesn’t want to come out and declare him the winner, most likely because it doesn’t do any good to give guys and reason to dial it back over the summer. But privately, Franklin knows the decision he has to make.

RELATED: A few B1G things are clear heading into the summer

I already went on record saying that I think McSorley could have a very C.J. Beathard-like year. Do I think he’ll lead Penn State to a 12-0 regular season in his first year as the starter? No. But I do think that McSorley develops into one of those guys who isn’t afraid to give up his body on a third-down scramble. I think he has the football IQ not to make the key mistakes that PSU had in a few blowout losses. And more importantly, I think he becomes the leader that teammates rally around.

That’s what the Lions need this offseason. Maybe, just maybe, McSorley has the ingredient Penn State has been missing in the Franklin era.