Even in a Rose Bowl loss, Penn State showed it was the class of the B1G in 2016

Somewhere around the beginning of the second half of the Rose Bowl, it should’ve hit you — Penn State was the class of the B1G in 2016.

The Lions fell to USC in thrilling, heart-stopping fashion. No, they couldn’t save the B1G from an epic postseason collapse. No, they didn’t send a message to the world that they could beat Alabama.

Penn State didn’t get the ending it wanted. That won’t sit well.

In a year in which no team in the conference truly separated itself, Penn State still showed by it deserved the title of “B1G’s best.” 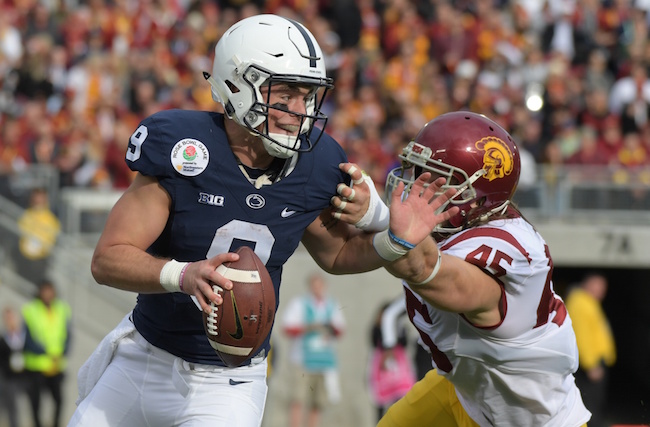 Save your jokes about the “class of the B1G” not meaning much. Did the conference come even close to expectations in its bowl games? No, which is why the argument is an open-ended one.

Still, Penn State did something that no other B1G team would’ve been able to do. The Lions roared back — excuse the bad PUN — against a lights out USC defense. That was the same USC defense that stifled Washington not too long ago.

With all due respect to Michigan’s comeback in the Orange Bowl, what Penn State did in essentially a road game was more impressive. And let’s be honest. You aren’t the conference’s best if you lose three of your final four games.

The Lions were a field goal away from finishing the season with 10 straight wins, three of which would’ve been against legitimate top-10 teams. They won what looked like the toughest division and toughest regular season conference (if that’s a thing).

Shoot, in the middle of the third quarter, many were probably wondering what Penn State could’ve done against Alabama. I know I was.

The amount of “OH MY GOODNESS” plays Penn State made was getting hard to count:

That doesn’t include the Gesicki diving score or the Godwin bobble/catch/touchdown on the sideline.

What other B1G team made as many spectacular plays as Penn State did? They had more offensive weapons than anyone. The scary thing is, everyone on that team who received an offensive touch in 2016 can return in 2017.

But this isn’t about Penn State’s potential. This is about what the Lions did in 2016. What they did on Monday was impressive, no matter how painful that loss was.

Penn State might’ve felt robbed not making the College Football Playoff four weeks ago. There were many Lions fans who probably felt robbed watching Ohio State get shut out by Clemson, and understandably so.

If bowl season taught us anything, it’s that you can’t judge a team until season’s end. Does that mean that Penn State certainly deserved to be in the playoff? Not necessarily. The selection committee went with Ohio State based on résumé. One loss is less than two, and that’s what it came down to.

Just for argument’s sake, let’s say Ohio State did have a slight advantage over Penn State entering bowl season. If the margin was slim, Penn State’s Rose Bowl performance erased that. The Lions didn’t allow injuries or inexperience to derail their chances when things weren’t going their way. They showed that they actually are dangerous and capable of scoring on any given play.

We saw the same Penn State team that won nine straight games that only entered the second quarter with a lead  in three of those games. They fell just short of making it 10.

No B1G team looked that good from October on. Not even Wisconsin — the only B1G team that won a New Year’s Six game — has an argument to make as the conference’s best. The Badgers lost to Penn State — and Michigan and Ohio State.

Penn State might’ve lost, but it should’ve quieted all the doubters who were still skeptical of its meteoric rise. A game like that can fuel an offseason for a young team. If the Rose Bowl loss yields an even better Penn State team in 2017, that’ll be a scary sight for the B1G.

You know, just in case the 2016 Lions weren’t dangerous enough.