The irony was rich.

When the Lions were getting trounced at Michigan in the B1G opener, nobody in their right mind was thinking, “well now it’s going to be an uphill battle for 2-2 Penn State to win the B1G East.” If they were thinking that, they were told to take a lap. Or if they were like James Franklin, they might’ve been thinking “we’ve just got to score a point.”

So Franklin, down 28-0 in the second half, elected to kick a field goal on a fourth-and-short deep in Wolverine territory. It was a weak, insecure move that some used as the tipping point for the argument to fire Franklin.

Late in the second half on Saturday vs. Michigan State, Franklin had a different approach. This time, he kept his foot on the gas. The Lions threw the ball all over the field, which led to a touchdown and made it a 45-12 Penn State lead.

A B1G East title was already in the bag. Instead, Penn State was getting revenge on last year’s B1G champ and racking up style points for its College Football Playoff bid.

That came on a day in which Michigan and Ohio State played arguably the best game in the history of college football’s best rivalry. Yet somehow, it was Penn State that punched its ticket to Indianapolis and earned another game to rack up some playoff style points.

What Penn State did to turn its season around was nothing short of remarkable. Amazingly, the B1G now has as good of a case as ever for two playoff teams. Jim Delany has Penn State to thank. 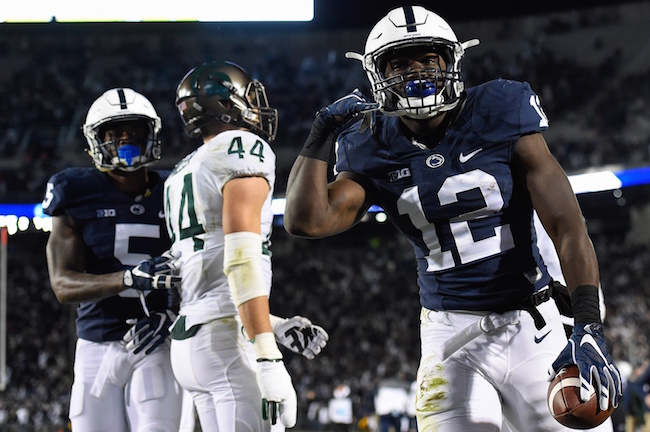 It was fitting that in arguably the greatest regular season in B1G history, we also saw the most improbable surprise team earn a trip to Indianapolis. And when you think about it, the Lions actually helped the B1G’s playoff contenders.

The Buckeyes were sitting at home rooting for a Penn State loss. In a perfect world, they’d have control of their own destiny and have one last game to essentially clinch a playoff berth.

But with Penn State going to Indianapolis, the Buckeyes will spend next weekend at home. They’ll sit tight with their three wins vs. top-eight teams — something only Michigan team can touch — with one loss to a top-10 team on the road. The Buckeyes won’t have to risk their playoff status with another game against Wisconsin. In a year with only one undefeated Power Five team, the Buckeyes are still in favorable position to make the field, unlike last year.

RELATED: Ohio State wins The Game you had to see to believe

Which other B1G team should be thankful for Penn State? Wisconsin, actually.

The Badgers have a chance to rack up another win vs. a top-10 team and not face Michigan or Ohio State. Obviously Wisconsin wanted a rematch with one of those two teams, but now, the Badgers get to avoid facing the B1G’s two most-talented teams. If the Badgers really catch a break, they won’t face a healthy Saquon Barkley, who was banged up on Saturday.

As two-loss teams, Penn State or Wisconsin could still need help in the form of a Washington or Clemson loss. But if the Badgers trounce a top-10 team playing as well as Penn State, the selection committee is going to have to look long and hard at them.

That, of course, is only if Wisconsin can silence college football’s happiest man:

Ironically enough, the only B1G team that didn’t get some sort of benefit from Penn State’s B1G East crown was Michigan. Regardless of what happens in Indy next week, Ohio State is now the only non-B1G champ that the selection committee will look at. If Penn State lost on Saturday, OSU goes to Indy and Michigan’s outside chance to be a non-conference champ in the playoff remains.

But there was no letdown in Happy Valley.

Penn State — the team that was destined for seven wins — held the key for the B1G’s two-team playoff bid. The Lions weren’t “the team nobody was respecting.” Before the Ohio State game, they hadn’t beat a ranked team since 2013. Now the Lions are a win from a conference title and possibly a College Football Playoff berth.

The only thing that could make Penn State’s story more unbelievable would be if Franklin again finds himself in the same position he was in Saturday. That is, chucking it across the field up big in the fourth quarter to gain some style points. Against that dominant Wisconsin defense, that would be a playoff-worthy accomplishment. Michigan and Ohio State couldn’t even do that.

That would be all sorts of ironic.