Make no mistake, that was the toughest win Penn State earned all year

It’s easy to look good when things are going your way.

When Penn State knocked off Ohio State, that was the case. Nobody is saying the Lions got lucky against Ohio State, but they took advantage of some fortunate bounces. Special teams miscues were the difference-maker in the game. It certainly wasn’t OSU’s 413-276 total yards advantage that propelled the Lions to the upset.

Knocking off the No. 2 team in the country obviously isn’t easy. But with a full complement of defensive starters, a healthy offensive line and a few fortunate bounces, that task is easier.

The Lions found themselves staring at the end of their improbable rise to top-10 power. Down three offensive linemen with a banged-up quarterback and trailing 10 points late on the road, PSU dug a little deeper than it had all year.

Not every top-10 team would’ve been able to rally given those circumstances. Credit the Lions for looking and fighting like a top-10 team. 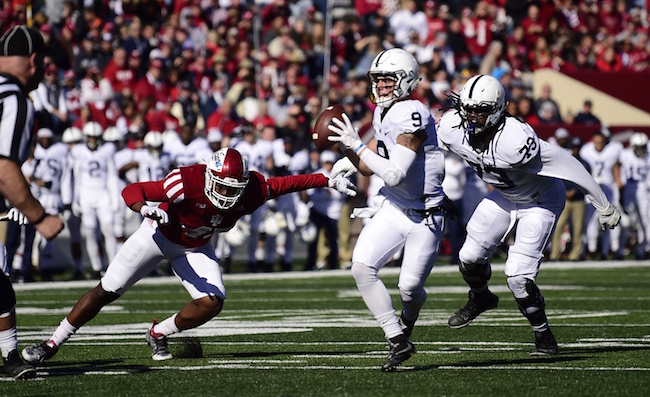 When the College Football Playoff selection committee examines Penn State’s résumé to rank the Lions on Tuesday night, Saturday’s game won’t stand out. Beating a five-win Indiana team on the road is solid, but nothing to suddenly put the Lions in the playoff conversation.

But it did show that the Lions aren’t just on some fluky winning streak.

There were definitely still some people who thought that was the case. The College GameDay crew was nearly unanimous in picking the Hoosiers to win. Never mind the fact that IU hasn’t beat a top-10 team in nearly 30 years.

For a while, that upset bid looked pretty good. But there was a key point in the middle of the third quarter that we were reminded why Penn State was suddenly in this position as one of the nation’s best.

In the middle of the third quarter, Trace McSorley was playing on a banged-up ankle and he lacked his normal mobility. On a third-down stunt, PSU’s decimated offensive line didn’t pick it up. Instead of trying to scramble, a hindered McSorley rushed and overthrew his man, which resulted in an Indiana interception. It was McSorley’s first interception since PSU’s last loss against Michigan back in September.

The Hoosiers marched down to the Penn State 1-yard line and appeared to be set on taking a 10-point lead. IU went for it on fourth down to try and capitalize on the rare PSU mistake. But Brandon Smith — the walk-on linebacker who was replacing an injured Jason Cabinda — deflected a pass on fourth down and PSU took over.

With its back against the wall, PSU came up big. Even though the Lions did eventually trail by 10, it provided the spark they needed.

This wasn’t OSU. It wasn’t like Penn State was on the better half of some special teams mistakes.

This wasn’t Iowa. It wasn’t like Penn State could just hand the ball off to Saquon Barkley and watch him dominate. Because of PSU’s banged-up line, it was about as rough a go as it could’ve been for the sophomore tailback. He finished the day with 33 carries for 60 yards.

It was an absolute grind. There were no holes for Barkley all afternoon. Over half of his carries went for zero or negative yards. In all likelihood, his Heisman campaign came to an end with that stat line.

So how in the world did Penn State score 31 points in the final 16 minutes?

When the Lions were in close, they didn’t waste opportunities. Barkley did get into the end zone twice in key spots. Moxie McSorley (is that his nickname yet?) also deserved a lot of credit for PSU’s comeback. He locked in to whatever zone he usually does in the second half and cranked it to another level. Sprained ankle or not, McSorley wasn’t about to let PSU become the punchline of the college football world on Saturday.

RELATED: How Saquon Barkley can earn a trip to New York

That’s what PSU was in danger of becoming. James Franklin completely shed this mediocre narrative that surrounded his team. Everybody would’ve been comfortable watching PSU come back down to earth and let Michigan and Ohio State duke it out for the B1G East crown.

That would’ve been the easy thing to do. But nothing about Saturday was easy. Top-10 teams win when the circumstances aren’t in their favor. Did PSU benefit from five Indiana turnovers? Of course. Did the Lions rally against a middle-of-the-road B1G team? Yes.

Still, don’t dismiss the significance of what Saturday meant for the Lions. You won’t find many grittier efforts than the one we saw from the Lions in Bloomington.