No good can come of Penn State's trip to Rutgers

How many other ways are there to say “none?”

That’s what Penn State has to gain at Rutgers this weekend. There’s not a single positive thing that can happen on Saturday night in Piscataway that would help the Lions. If that score stays close even into the second quarter, cue the eye emojis with scoreboard tweets from all the national pundits. If the Lions dismantle Rutgers, cool. That’s what three top-10 teams already did to the Scarlet Knights.

This weekend is essentially pass-fail for Penn State. Winning at Rutgers wouldn’t warrant a gold star. It wouldn’t be another feather on the Lions’ cap.

Everything — including a possible College Football Playoff berth that James Franklin is publicly ignoring — can go up in flames these final two weeks, starting with arguably the worst team in FBS.

The only way to go is down. 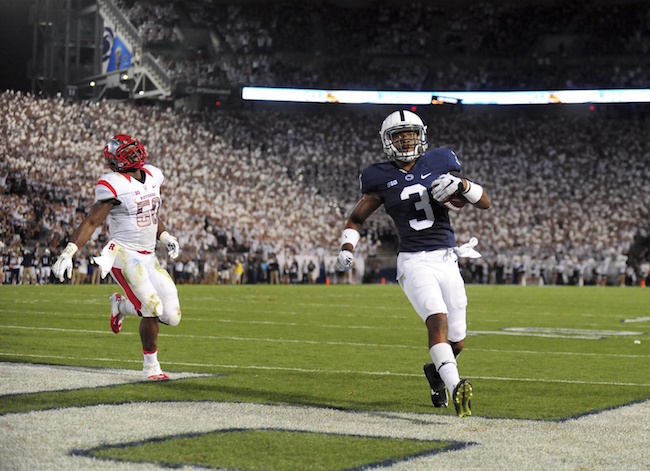 Usually, there’s something to gain from every game. Last week, Ohio State gained a lot by rolling at Maryland, which is likely a bowl team. The College Football Playoff selection committee admitted OSU’s back-to-back 62-3 wins were impressive.

OSU got its starters on the bench early and some reserves got to play in a road atmosphere for the first time.

But Penn State is in a different situation. After winning six in a row, they certainly don’t need a confidence boost. They need a bye week.

The Lions, as you’ll recall, are extremely banged up on the offensive line. How banged up are they? Franklin is exploring the possibility of burning two redshirts for true freshmen Michal Menet and Will Fries. Both are talented, but burning their redshirts in mid-November because of a depleted offensive line isn’t ideal, to say the least.

RELATED: Penn State OT Paris Palmer out for rest of 2016

Speaking of that depleted offensive line, are the Lions magically going to get healthier on Saturday? No. As is the case every game, the Lions are at risking of losing even more starters from an already-banged up unit. They saw how difficult it was to operate without a healthy offensive line at Indiana. Who knows what this group will look like if and when it takes on a B1G power?

Let’s bring the focus back to Saturday. After all, the Lions still have embarrassment to avoid.

The downside of Penn State’s schedule — the easiest remaining two games according to ESPN’s always-reliable FPI — is that it might not expose the Lions’ weaknesses. Rutgers isn’t exactly a group that’s going to bring out weaknesses a team didn’t know it had. That’s dangerous this time of year.

Maybe it creates a false confidence in the offensive line, which could still look good even with its mess of injuries. Maybe Trace McSorley gets away with poor decisions because Rutgers doesn’t have the secondary that can make him pay. Who knows what can happen.

We do know that the Lions don’t have any wiggle room in their pursuit of a College Football Playoff spot. Many feel that if they win out and get a B1G Championship that they’ll make the field. That in itself is amazing.

Winning a too-close-for-comfort game at Rutgers won’t exactly help that cause.

To be fair, this isn’t meant to be a slight to Rutgers. In a year or two, Chris Ash will have the program in much more formidable shape.

The problem is that there’s been a bar set by top-10 teams against the Knights. It’s pretty high:

All three of those teams are still in the playoff hunt. That’s where Penn State hopes to be. Will the committee knock the Lions if they don’t win by 58 points? No, but they’ll be expected to dominate. Anything less than that would be a disappointment.

Avoiding road letdowns aren’t easy. Penn State almost learned that lesson last week at Indiana. This is what comes with the territory of being a top-10 team. It’s not that wins are taken for granted, but the room to fall is so much greater than the room to rise.

Franklin knows that his team has a new standard that it must meet every week. His Bill Belichick-like attitude toward big-picture questions could allow his extremely young team to remain focused on the task at hand.