The B1G and the Rose Bowl.

The two were associated with one another for an obvious reason. For many years, the Rose Bowl was the ultimate prize for a B1G team. Get to Pasadena and surely it’s been a successful year. Legendary Michigan coach Bo Schembechler said it best back in 1989.

“If there are any Big Ten teams that shoot for a national championship, they’re damn fools…You play to win the Big Ten championship, and if you win it and go to the Rose Bowl and win it, then you’ve had a great season.”

That’s all true. Those first two obstacles are givens, at least for one B1G team. But the last obstacle — winning it — has been a struggle for the B1G in the 21st century.

Iowa’s blowout loss to Stanford last season dropped the B1G’s 21st century Rose Bowl record to 3-10. That means of the last 17 “Granddaddy of Them All” games, the B1G won just 18 percent of them. In the last 15 seasons, the B1G has just two Rose Bowl wins.

Now, it’s up to Penn State to buck that trend. The Lions, just like Iowa, are riding a storybook season after minimal preseason expectations. This time, however, the Rose Bowl will get the B1G champs. They’ll get a team that’s familiar with bucking trends.

The only question is whether or not they can buck one more. If the last two months were any indication, Penn State is more than capable of doing that. 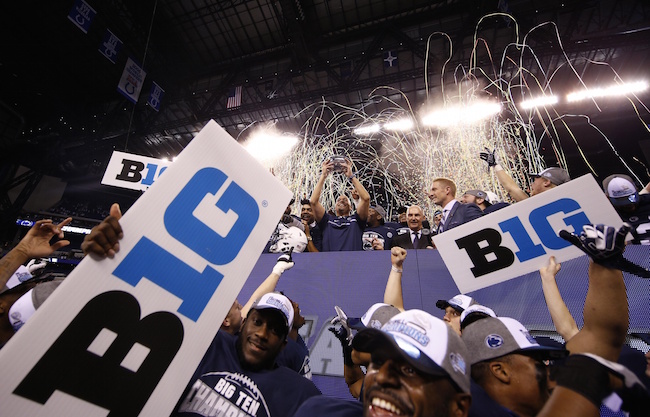 Much has been made about the B1G’s lack of national titles in relation to the conference’s strength. But another part of that is the weak Rose Bowl showings in the 21st century.

Having said that, the “close but no cigar” notion really doesn’t apply to the B1G. Six of the 10 21st century Rose Bowl losses were by double digits. The B1G hasn’t had a blowout win in the Rose Bowl in the 21st century. In fact, the three B1G wins were all by single digits.

If USC does the same to Penn State, the second point will surface again, and understandably so. Some will claim PSU’s winning streak was the product of a weak B1G and a fluky play against Ohio State. Fair or not, that’s the reality of bowl season. Seasons are often summed up by 60 minutes.

Of those 10 Rose Bowl losses in the 21st century, four of them came to USC. Ironically enough, the most recent Rose Bowl appearance for the Trojans was against Penn State in 2009.

In many ways, the two teams had similar paths back to the granddaddy. Both programs dealt with NCAA sanctions in the time since that game. Both programs were left for dead after losing multiple games in September. Fire Clay Helton. Fire James Franklin. Two months later, the two were national coach of the year candidates after running the post-September table.

Not only is Penn State trying to halt a bad B1G trend, it’s also trying to slow down a USC team that’s been lights out since moving Sam Darnold to quarterback.

Look at how similar the two teams were post-September:

In other words, none of the 10 B1G teams that lost in the 21st century played as well as the 2016-17 Penn State team in the final two months.

That won’t be on the minds of Penn State players come Monday. The B1G’s longtime woes in its premiere bowl game won’t be of concern, either.

What will be on Penn State’s mind is drawing up the same formula that got them those nine straight wins — stretch the field, get big plays in the ground game and limit the big pass plays. Did you know that Penn State actually led the country in fewest yards per completion allowed? Or that nobody in the country has completed more passes of 20-plus yards through the air than Trace McSorley.

Yet still, Vegas is questioning the firepower of Penn State compared to USC. The Lions are touchdown underdogs after winning the toughest conference in America and nearly making the College Football Playoff.

Perhaps the oddsmakers aren’t buying the belief that the B1G Championship carries weight unless it’s won by Ohio State or Michigan. But believe it or not, those schools combined for one Rose Bowl victory in the 21st century.

Penn State needs one more win to legitimize its surprise season. And maybe in the process, the Lions can take back the bowl game that was once synonymous with Division I’s oldest conference.