“This Valley hasn’t been this happy in a long time.”

Penn State, after all the pain and frustration of the James Franklin era, finally got a moment worth celebrating. Somehow, some way, the Lions knocked off a team that looked invincible. The same Penn State team that looked lifeless a month ago in the B1G opener now has all sorts of life.

Saturday night was as good as it gets for Penn State. Franklin took down Urban Meyer as a 19-point underdog and finally got a signature win.

There were too many ‘did-that-just-happen?’ superlatives to throw out for Penn State’s performance. How the Lions finally ended up on the right side of a stunner will dumbfound even the biggest Penn State apologist. 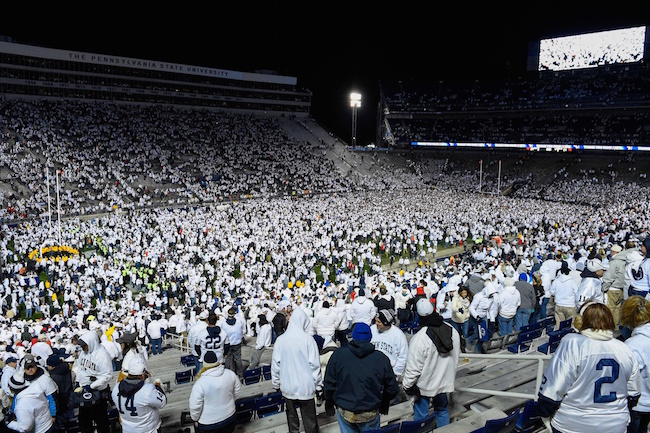 There was nothing familiar about what unfolded on Saturday night.

The Lions defensive line was full of first-year starters until Garrett Sickels returned from his first-half suspension. Somehow, they played like three-year veterans. J.T. Barrett didn’t deliver the comeback everyone expected him to because the Lions contained him. Whether it was Jason Cabinda, Evan Schwan or Kevin Givens, PSU swarmed Barrett in the moments that he usually shines.

Wasn’t this defense just a month removed from getting completely torched in Michigan?

The PSU defensive line had three NFL players on it last year. They never came anywhere close to performing at the level PSU played at on Saturday night.

That was the only thing that was going to take down a team like OSU. Well, that and some remarkable special teams plays.

Special teams — the area that Meyer prides himself on — became PSU’s ace in the hole down the stretch. A blocked punt and a blocked field goal opened the door for an offense that needed all the help it could get.

There are probably some people who witnessed this moment that still aren’t sure if it happened:

They’ll be talking about that play in State College for a long time.

You could see the joy in Franklin’s face after that play. That was something that we haven’t seen during his three years in State College. It was almost like he didn’t know how to react.

PSU never showed it could hang with the big boys. Franklin hadn’t beat a top-25 team, much less rally down from 14 points in the fourth quarter against the No. 2 team in the country.

Saturday night wasn’t supposed to be Penn State’s night. But it was. Against all odds, it was.

All this midweek talk about Ohio State and Michigan facing off as unbeatens was halted in its tracks. Believe it or not, Penn State is now ahead of the Buckeyes in the standings. The Lions are still essentially 1.5 games behind Michigan, but that didn’t matter on Saturday night.

As much as any program in college football, Penn State has struggled with this new identity in the post-Joe Paterno era. Sure, there were signature moments. The 4OT win against Michigan in 2013 will always stand out. But Saturday night even trumped that.

It was the first time that an unranked Penn State beat a top-two team since 1964. Penn State knocked off a team with legitimate national title aspirations. The Buckeyes could still likely win out and make the College Football Playoff field, but nobody in Happy Valley cared about that. For once, PSU won a game it wasn’t supposed to.

Penn State athletic director Sandy Barbour repeatedly said that Franklin wasn’t on any hot seat, that but that she wanted to see improvement. Who knew PSU’s first major sign of improvement would be taking down unbeaten Ohio State?

There was no reason to believe that Penn State would finally take down one of the college football powers it was once associated with. Up until that final sack of Barrett, there were probably PSU fans in denial that this time would be different.

Saturday night was definitely different, and different in a good way. There’s no guarantee that Saturday night will lead to a program turnaround, though the upcoming schedule is favorable.

But that didn’t matter. All that mattered was that for one wild night, the Valley was truly happy.