Chris Ash addressed the elephant in the room.

“I’ve just got to do a good enough job to make sure I’m not the ninth coordinator that goes,” Kill told NJ.com after he was hired. “That’s my whole goal. I want to be able to stay here longer than a year and not get fired.”

The odds of Kill lasting longer than a year are favorable. After all, he got the richest assistant contract in Rutgers athletics history.

Kill is known for his ground-and-pound system. Typically, his offense features several tailbacks, a dual-threat quarterback and not much of a downfield passing game. Even dating back his Northern Illinois days, all but one of Kill’s teams ran the ball at least 500 times. To his credit, that helped revive Minnesota. He turned a three-win team into a B1G West contender in four years.

But there are also two major differences. One obvious one is that Kill is only a coordinator, marking the first time since 1993 that he’s not a head coach. The other difference is that Kill is taking over the last-ranked offense in college football.

And to turn that around, he can’t afford to have a one-dimensional offense. 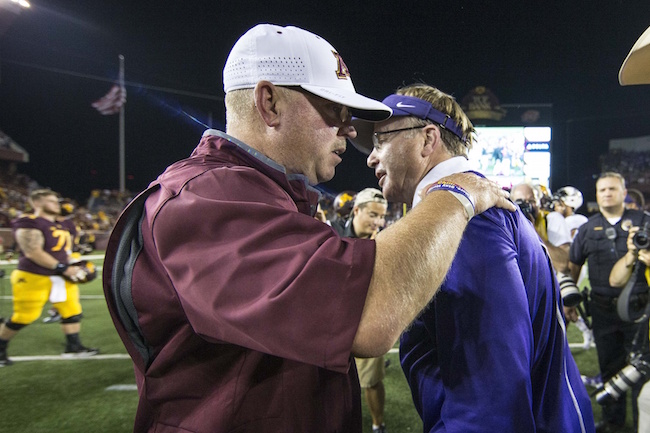 The Knights were dead last in FBS in yards per play and offensive touchdowns. They reached 14 points in a B1G game just twice and they were outscored 360-86 in conference play (the Minnesota team he took over only lost two games by 20-plus points). Besides being the worst offensive team in the country, Rutgers was 116th in scoring defense.

Add it all up and it’s not hard to figure out why Knights ended up on the wrong side of so many blowouts in 2016.

So what does that have to do with Kill’s situation?

Well, odds are, Rutgers is going to find itself trailing in a few games in 2017…and in 2018. That’s the reality when you’re in arguably the best division in college football. That isn’t changing anytime soon. Handing the ball off when you’re down 28 points isn’t the way to erase a deficit.

Kill can still have a run-first mindset, but he has to find a way to develop Rutgers’ anemic passing game. That will be priority No. 1 for him in Piscataway.

Fortunately for Kill, the passing game cupboard isn’t as bare as the 2016 numbers would suggest. He’ll try and maximize the versatile Janarion Grant, who might be the most dynamic open-field threat he’s coached. Kill will also get to draw up plays for the speedy Jawuan Harris (as soon as he’s done dominating on the baseball field).

Add in four-star freshman receiver Bo Melton, and Rutgers isn’t lacking outside weapons who can stretch the field. The question, of course, is who will get them the ball.

Kill kept the spread system intact, but he completely wiped the slate clean to evaluate the quarterback position. With Chris Laviano and Hayden Rettig out of the picture, many assumed that Giovanni Rescigno would be the starter. But Kill maintained that it’s a wide-open competition. Former TCU transfer Zach Allen, sophomore Tylin Oden and true freshman Johnathan Lewis will get a shot.

There are no perceived favorites, said Kill, who joked that his wife would get the job if she gave Rutgers the best chance to win.

Whoever gets the job, Kill must put up better passing game numbers than his offenses did at Minnesota:

And for what it’s worth, the 2015 season improvements were mostly Tracy Claeys’ doing after he took over for Kill.

Why was Kill able to develop that kind of system at Minnesota? His defenses finished in the top 40 percentile nationally every year after his first season. Rutgers’ defense is a long way off from making that kind of jump.

Besides, that’s out of Kill’s control as an offensive coordinator. All he can do is try and establish offensive balance.

RELATED: Five B1G players that need to touch the rock more in 2017

Look around the B1G. Maryland, which had the B1G’s fourth-best running game, averaged 6.75 points against the likes of Michigan, Nebraska, Ohio State and Penn State. Why? The Terps didn’t have a passing game to speak of.

Fall behind a couple scores against quality competition without a passing game and you’re in for a rude awakening. That’s also what made Iowa look so awful in its losses. The same was true of Northwestern in 2015. If Kill fails to develop the passing game at Rutgers, the embarrassing losses are going to keep coming.

The Knights don’t have to become Texas Tech and throw the ball 50 times per game. Nobody is saying that has to happen. If Kill believes a dual-threat quarterback is the guy, then he can build the offense around him.

But a conservative, predictable offense isn’t going to be what digs Rutgers out of its hole. The Knights must find ways to actually stretch defenses out and not wilt when facing a deficit. That message has been made clear to Kill.

If he comes up short, he’ll pass the baton to coordinator No. 9.

Connor O'Gara
Connor O'Gara is the senior national columnist for Saturday Tradition. He's a member of the Football Writers Association of America. After spending his entire life living in B1G country, he moved to the South in 2015.
RECENT ARTICLES
RUTGERS
B1G upset: Rutgers back on the bubble after blowout loss to Nebraska
RUTGERS
Upset alert: Nebraska jumps out to 18-point halftime lead over Rutgers
RUTGERS
Greg Schiano reveals date for Rutgers' spring game
RUTGERS
Former Rutgers star, current NY Jets CB donates 35,000 meals to those in need in Texas