After Michigan, Rutgers will have finished CFB's toughest first-half schedule

Michigan will stroll into Piscataway on Saturday and in all likelihood, dominate. The Wolverines will give the Scarlet Knights all that they can handle. Even worse, it could be Michigan’s crop of New Jersey natives doing the damage.

Chris Ash will likely walk into his post-game press conference and try to put the pieces together after another humbling loss. Frustrated, he’ll probably begin with something like this.

“Michigan wasn’t anything we hadn’t seen before.”

That won’t be meant as a slight to Jim Harbaugh’s program, though some might treat it as such after the war of words between the two programs this summer.

Ash would be right to say that. Michigan is the third program ranked in the current Associated Press top five that Rutgers will have faced in 2016. The deck was already stacked high against the Scarlet Knights coming into the season.

But when Ash meets with the media on Saturday night, his rebuilding program will have completed the toughest first-half schedule of any team in America. 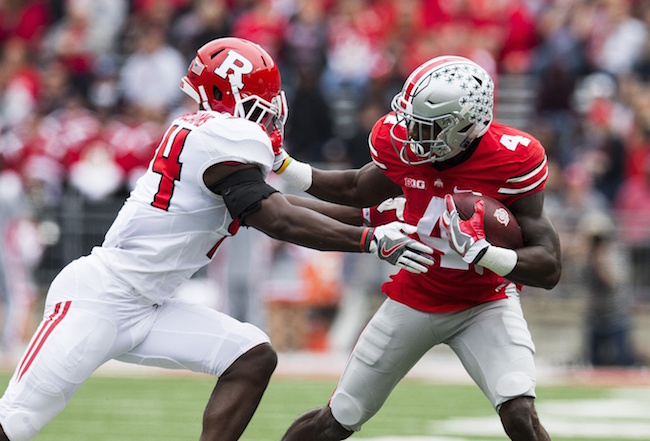 It’s easy to forget how tough this start has been for Rutgers. On paper, many felt that it was Wisconsin that had the toughest start to the 2016 schedule. The Badgers have obviously handled their quality opponents differently than Rutgers.

Now that games can do the talking instead of preseason rankings, Rutgers gets the nod in the strength of schedule argument.

Of Wisconsin’s four headliner first-half foes, two of them are now unranked (LSU and MSU). After their bye, the Badgers will take on No. 2 Ohio State a week from Saturday to complete their first half.

As NJ.com’s Ryan Dunleavy broke down, Wisconsin, Oklahoma and Louisville are the only teams that can even sniff Rutgers’ first-half schedule.

The difference, of course, is that those teams handled their tough start much better than Rutgers has. Against their first two top-five opponents, Washington and Ohio State, the numbers are ugly.

Rutgers did what most teams what do against top-five teams on the road. They got blown out. Even at home this week, Vegas has Rutgers as 28-point underdogs.

In all likelihood, the Knights will fall to 2-4 with three blowout losses to three really good teams. Without Janarion Grant, Rutgers could be an underdog for every game it plays for the rest of the season.

The good news for Rutgers is that after this week, the top-five opponents are gone. In fact, the top-25 opponents could be gone. The Knights don’t have a single game on the rest of the schedule vs. a team in the current top 25. That could actually allow Rutgers to not fall into a deep early hole and run the ball, which is what it does best.

Unfortunately for the Knights, another rude awakening could be in store on Saturday. New Jersey natives like Jabrill Peppers and Rashan Gary will deliver highlight-reel plays while Ash searches for anyone who can break free against Michigan’s loaded defense.

It could be another frustrating reminder that the Scarlet Knights still don’t have the talent to compete with the B1G East’s best. The very team that Ash would love to call a rival one day set a bar that’s unreachable for the Knights in Year 1 or maybe even Year 3 of this rebuild.

Rutgers players want to compete against the best. They said during the week that they don’t mind the tough schedule, and that facing competition like this is the only thing that will make them better.

The same is true for Ash. But he wouldn’t have minded a more backloaded slate.

“Any program that plays three top-five schools in the first six weeks, that’s a challenging schedule,” Ash told NJ.com. “I don’t know if there’s a lot of coaches out there that would say, ‘Hey, I’d like to sign up for that. Let’s put that together.'”

That’s the hand Ash was dealt. Unfortunately for him, he sat down at a table with an unlucky dealer.