Jersey Score: How Rutgers plans on becoming "the new face of the B1G"

In the Melton household, Rutgers is the school. Bo Melton is the son of two former Rutgers athletes. His mom played for the Scarlet Knights basketball team and his dad was an ace kick returner on the gridiron. His parents didn’t push Rutgers, but he grew up in South Jersey. It was hard not to learn about the program.

His heroes were guys like Kenny Britt and Mohamed Sanu. They were New Jersey-raised recruits who stayed home, carlettarred for the Scarlet Knights, and went off to the NFL.

Those stories have been all too rare at Rutgers in recent memory. Britt and Sanu both came from recruiting classes that had just one top-10 recruit in Jersey. In fact, the last top-five Jersey recruits who signed with the Knights were Darius Hamilton and Leonte Carroo in 2012.

That is, until Bo Melton.

When Melton gave his pledge to the Scarlet Knights in April, it was considered a turning point. The dynamic Cedar Creek receiver was the in-state talent that Kyle Flood’s staff couldn’t get, at least not in the last few years.

Before Melton, first-year coach Chris Ash hadn’t had luck in the Garden State, either. He hadn’t signed a 2017 recruit ranked among the top 25 prospects in Jersey.

Fair or unfair, the assumption was that Melton’s early commitment would set the tone for Rutgers’ 2017 class in New Jersey. He welcomed the task of convincing the top talents in the state to stay home. To this point, Melton has delivered. Five top-25 recruits in the state gave their pledge to the program.

Melton isn’t one to take credit for swaying recruits. That’s their decision. But he hasn’t been shy about preaching the same message Ash preached to him. 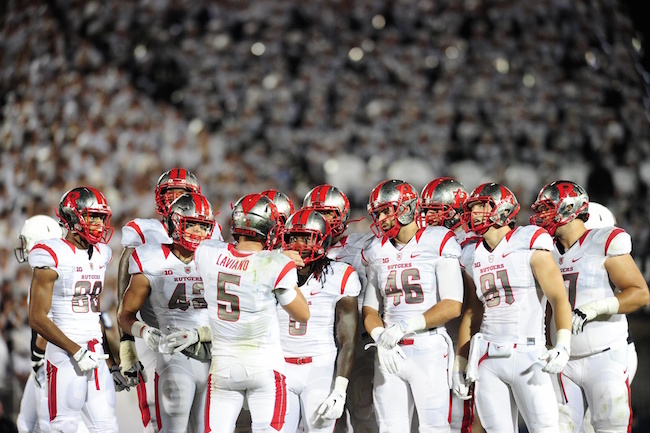 That’s been the goal for Ash since he was hired to clean up Flood’s mess back in December. He took over a program coming off a four-win season that endured as much off-the-field embarrassment as any Power Five program in the country. In July, Ash has 20 commitments in a 2017 class that ranks fourth in the B1G and 18th in the nation.

Why has his staff been so successful?

“They’re preaching how Rutgers is the new face of the B1G,” Melton said. “Kyle Flood was a good coach, but he didn’t preach how Rutgers could be a top target and how we have a lot great in-state recruits that go out of state.”

Those Garden State departures have been well-documented. Five of the top eight Jersey recruits in the 2016 class went to Michigan, including No. 1 overall recruit Rashan Gary. Five of the top nine Jersey recruits in the 2015 class went to Penn State, including receiver Juwan Johnson (AKA Megatron Jr.). Jabrill Peppers, who some feel was Jersey’s best recruit ever, didn’t seriously consider Rutgers. Instead, he chose Michigan over Penn State.

Rutgers lost frustrating battles out of state, too. Flood was the first coach to offer Saquon Barkley. He actually committed to RU. But when his stock soared his senior year, he flipped to Penn State.

It was the in-state losses that stumped Melton. Sure, he’s always been a Rutgers fan, but he didn’t understand why top Jersey recruits didn’t take more pride in their home state.

Micah Clark could’ve been another one of those recruits. The four-star offensive tackle was the No. 2 recruit in Jersey with offers from the likes of Alabama, Michigan, Ohio State and Penn State.

After Melton told Ash that he was coming to Piscataway, he gave him some more he news. Rutgers was about to land Clark.

Sure enough, Melton got in touch with him and confirmed Clark’s strong lean to the program.

Four days later, Clark surprised recruiting experts and gave his pledge to Ash. Even better, the world got to see Clark and his brother, Jamaal Beaty announce their commitments.

If Melton’s commitment raised some eyebrows, Clark’s turned some heads, even within his own circles.

“The first word that comes to me is ‘Wow,’ ” Clark’s high school coach Derek Sininsky said to the Asbury Press. “This is a wow not only for Micah and Jamaal (Beaty), but it’s a wow for Rutgers. In order to get Micah to commit there so early, that says a lot about Coach Ash and Coach (AJ) Blaz. They just built that bond and relationship immediately.”

Ash had plenty of relationships to restore when he was hired. Rutgers had fallen out of favor for in-state talents like Melton during the 2015 season. He saw the slew of arrests and suspensions that the program had. Naturally, he looked at other schools.

Melton had Oregon and Ohio State in his final three. He liked what he saw when he was in Columbus for Ohio State’s annual Friday Night Lights camp in the summer of 2015. While there, Melton was coached by a fiery Buckeye assistant, who made a good first impression.

That OSU assistant was Ash. The first recruit Ash texted after he was hired at Rutgers was Melton.

“It just made my day,” Melton said. “That completely changed the whole program around for me.”

RELATED: Rutgers’ joint satellite camp with Ohio State is another sign Chris Ash gets it

The stars aligned for him to commit to Rutgers. Will it for the rest of Jersey’s top talent? That remains to be seen. Just because Ash has key in-state commitments from Clark and Melton doesn’t mean others will stop recruiting them.

But it’s hard to deny Rutgers’ momentum. Six top-25 recruits in the state is certainly a solid start that Melton and the Rutgers staff plans to build on. The 247sports crystal ball predicts No. 3 Jersey recruit Fred Hansard will commit to Rutgers, as will No. 4 recruit Markquese Bell.

Melton made his pitch to Bell and all of the state’s top talent, including Jersey’s No. 1 recruit Drew Singleton and No. 8 recruit Corey Bolds. Both of them are from Paramus Catholic, which produced Gary and Peppers. Former Paramus Catholic coach Chris Partridge, who is now an assistant at Michigan,  created an unofficial pipeline for the Wolverines.

Ash already started to change the narrative that Rutgers doesn’t recruit North Jersey by landing Clark, a Holmdel product. Convincing a Paramus Catholic recruit like Singleton to break away from the Michigan pipeline and stay home would be Ash’s biggest victory yet.

But even if Singleton picks Michigan, Rutgers could easily wind up with four of the state’s top five recruits for the first time. 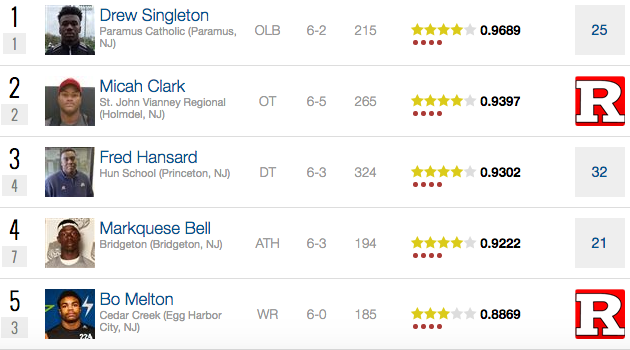 That could end up being what separates the 2017 class. Coaches have come in and preached the “fence off the state” mantra before. The 2012 class got commitments from four of the state’s top nine recruits. The program had four 9-win seasons from 2006-12.

But those were all in the Big East. Their success wasn’t measured against the likes of Michigan and Ohio State. And even that 2006 group, which won 11 games and finished ranked No. 12, didn’t have a single top-five Jersey recruit on the roster.

Even if Ash delivers a top-20 class loaded with top local talent, he still faces an uphill battle in the B1G East.

But Bo knows that’s an easier fight when Rutgers has Jersey in its corner.

“Once you keep the talent home and bring more talent into Jersey, Rutgers can be a national contender,” Melton said. “Once Rutgers starts getting it clicking and as soon as this class gets ready, we want to show the world that Rutgers can be on top.”