Is Barry Alvarez Wisconsin's College Football Playoff ace in the hole? Not quite

In a week in which every tiebreaker and résumé-booster matters, Wisconsin has something no other playoff contender has.

The Wisconsin athletic director will be in the most important room in America on Sunday. He’s a veteran member of the selection committee — if there is such a thing — and he has the respect of his colleagues. Some believe he was a driving force as to why Ohio State hurdled TCU in 2014 after trouncing Wisconsin in the B1G Championship.

On Sunday, everyone could be wondering if Alvarez’s Badgers will make a hurdle from No. 6 to No. 4. That, of course, is only if they beat Penn State. Ironically enough, Alvarez won’t be on hand to watch his Badgers play in their biggest game of the year. Instead, he’ll be back in suburban Dallas helping make what figures to be the committee’s most-scrutinized call yet.

But Alvarez won’t be sitting there pounding the table for Wisconsin, no matter how much the athletic director wants to. The rules prevent that. If any Badger fans were hoping that Alvarez would save the day, those expectations should be tempered.

The selection committee has a protocol for Alvarez’s atypical predicament. 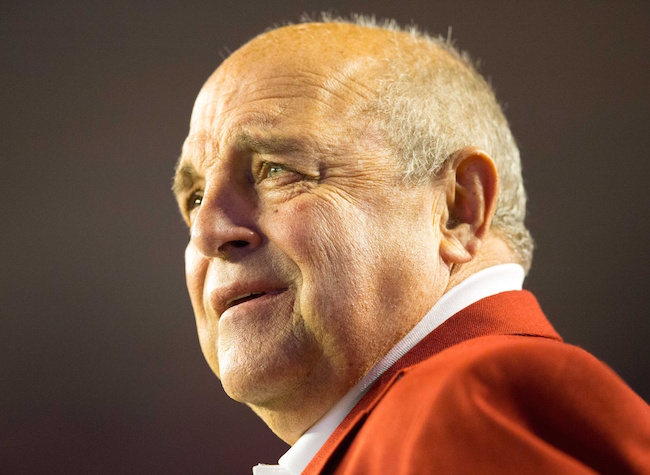 This was a question that some Wisconsin and non-Wisconsin fans were wondering about. How is it fair that the Badgers get to have their AD in the selection committee room? Won’t he push for the Badgers to make the field until he’s blue in the face?

Unfortunately for Wisconsin, that won’t be the case. ESPN College Football Playoff reporter Heather Dinich laid out exactly what role Alvarez will have on Sunday.

Here was what Dinich said about Alvarez’s role on Sunday:

Wisconsin athletic director Barry Alvarez is in a unique position because he has seen the Badgers play Michigan and Ohio State — two teams the committee will be debating. Alvarez, who is not going to the Big Ten title game because of his responsibilities as a committee member, is recused from voting for Wisconsin and any discussions about the Badgers, but he CAN weigh in on the other teams and the committee members value his voice. CFP executive director Bill Hancock said committee chair Kirby Hocutt would say, “We will now discuss Wisconsin. Barry, please step out if the room.” The same goes for Clemson AD and committee member Dan Radakovich, who will not go to the ACC title game.

It would be interesting to hear how vocal Alvarez would be when the committee discusses the likes of Washington or Michigan. If the Badgers win on Saturday, can you picture any scenario in which he’d make a case for the Wolverines to get in instead of them?

Not to say that Alvarez is overly biased, but goodness, how could one not be in that situation? At least a little bit, right? Alvarez takes his selection committee duties very seriously, and obviously, his opinions will be heard by others who know he has a dog in the fight.

It could create an unprecedented dynamic having the AD of a possible bubble team. You can bet there are Michigan fans who wish that Lloyd Carr wouldn’t have stepped down from his post on the selection committee.

We won’t know until Sunday whether or not this even matters. For all we know, Alvarez will have to discuss a Penn State team that just rolled his Badgers in the B1G Championship.

But if Wisconsin does win the B1G Championship and get that final playoff spot, get ready to hear fans of non-playoff teams cry foul.