Where team was when he was hired — Atypically in flux.

Wisconsin might be viewed as one of the more steady programs in the country. The Badgers are one of nine teams in the country with double-digit wins in five of the last seven seasons. Yet for the second time in a two-year stretch, the Badgers found themselves looking for a new coach.

It’s weird to think that Wisconsin has a bunch of upperclassmen who were recruited by Bret Bielema. But to Chryst’s credit, he kept most of them and Gary Andersen’s guys on board. There was no mass exodus because of Chryst’s history as a UW assistant.

I hate to throw around the term “plug-and-play” when it comes to a first-year coach, because I think that takes away from how difficult it is to take over a locker room. But if there was any first-year B1G coach who had a plug-and-play situation in 2015, it was Chryst.

Perhaps bigger than keeping any one player on board, Chryst convinced Dave Aranda to stick around one more year. As we saw throughout the Badgers’ frustrating offensive season, Aranda’s defense was the reason Chryst didn’t take a significant step back in his first year in Madison. 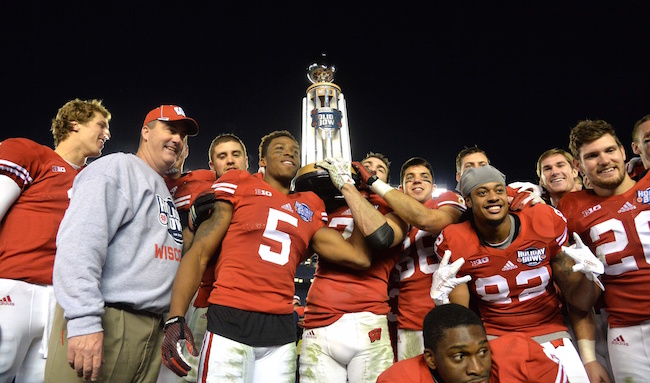 So yeah, there were still some major questions about how good Wisconsin was when it took on USC.

Fortunately for Chryst, he answered them with flying colors.

The Badgers finally beat a team that it wasn’t supposed to, at least by betting standards. The most underrated defense in college football dominated one of the country’s top quarterbacks in Cody Kessler, and Joel Stave ended his career with one of his best wins to date.

Chryst was dealt a tough hand with the Badger offense. The constant shuffling of inexperienced linemen combined with the Corey Clement saga basically blew up Chryst’s original game plan. The USC win finally showed what Wisconsin was capable of with its full arsenal.

Ok, I know. It was a catch. If the right call was made, we aren’t having this conversation. But it wasn’t, so here we are.

For the record, the Badger offense did nothing to deserve a win. It went down as one of the worst rushing performances in the history of Camp Randall Stadium — the Badgers had -26 total yards on the ground — and Stave was a turnover machine.

Not to take away anything from Northwestern, which also hit double-digit wins last year, but the Badgers haven’t been pushed around like that at home in a long time. In fact, it was their first loss to the Wildcats in Madison since 2000.

But aside from the fact that Wisconsin lost a game in which it held a team to barely over 200 yards of total offense, the off-the-field activity added to the embarrassment. Throwing snowballs at cheerleaders and officials was not the poor choice of everyone, but it did make national headlines, which is never a good look for a program.

That obviously has nothing to do with Chryst. But that might’ve been the toughest postgame pill to swallow in his first season.

Highlighted by a couple of U.S. Army All-American game invitees, the Badgers went everywhere to find the nation’s No. 33 class. A whopping 15 different states made up Chryst’s first full group. That’s not a bad sign.

But odd was the fact that for the first time since recruiting rankings began, the Badgers didn’t sign at least two of the top five recruits from Wisconsin. Among the top 13 recruits in the state, Iowa and Western Michigan had just as many (3) signees as Wisconsin. In Chryst’s first year, I wouldn’t take too much from that. It could have simply been other programs capitalized on Wisconsin’s recent instability at the head coach position.

Whatever it was, Chryst still landed a talented group. Cole Van Lanen has the look of the next great Badger lineman and Garrett Rand could become a three-year starter on the defensive line. The question will be whether or not Chryst can turn those three-star talents into All-B1G players and NFL draft picks like Wisconsin has done in years past. 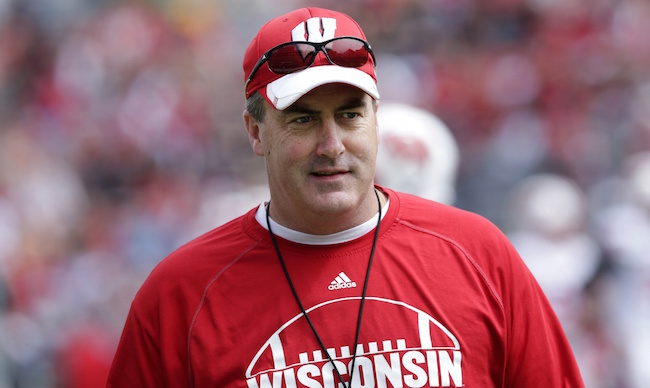 What could get him fired — Some massive altercation with Barry Alvarez on the heels of a bowl-less season. Actually, given Wisconsin’s inability to keep a coach in town recently, Alvarez would probably let just about anything slide.

Why he’s at No. 7 — Trivia time. Can you name all the first-year Power Five coaches who won double-digit games in 2015? That would be Jim Harbaugh, Jim McElwain and Chryst. The first two guys got a lot more money and a lot more credit than Chryst did.

What Chryst did in his first season with all of the injuries he had to work with was impressive. He didn’t have future first-round picks like Florida or Michigan, either.

Having said that, Chryst’s team was made up of guys recruited from previous regimes. And beating B1G teams with a combined record of 10-38 in conference didn’t put Chryst into the national spotlight.

We know that Chryst was a fantastic assistant. The job he did with Wisconsin’s offense during the Bielema years was impressive. He was one of the offensive masterminds behind some of the best seasons in program history.

But doing it as a head coach — and doing it consistently — is a different ballgame. Chryst never rose above mediocrity in his three seasons at Pitt. The jury is still out on whether or not he can recruit top-20 classes and keep Wisconsin in the B1G title hunt on a yearly basis.

I think Chryst has the ability to become what Mark Dantonio is for Michigan State. Don’t forget that like Chryst, Dantonio hovered around .500 in his first head coaching stop at Cincinnati. Once he got to East Lansing, he established his culture and maximized talent. Chryst actually had a better foundation to work with than Dantonio did, and he doesn’t have to compete in the same division as Michigan and Ohio State.

That’s my way of saying yes, I do think Chryst can get Wisconsin back to the level it was at a few years ago. If he can somehow navigate his way through that brutal first month-and-a-half of 2016 with only two losses, I’ll be singing his praises even louder.